A Review in Pictures: The Last Lovecraft- Relic of Cthulhu

Can you laugh at Lovecraft?  That is the question raised by today's film, an independent film from 2009.  The first thing to note is that this story is very accurate to the Cthulhu mythos- at least as far as I can tell.  There are a lot of films out there that get it right- 2005's The Call of Cthulhu- and there are a lot of films that get it wrong- 2007's Cthulhu.  There are a bunch of bland ones like Dagon as well, but they are not worth a lot of mention.  Where does this one fit?  Like I said, the filmmakers are clearly fans and mixed in the old with the new.  You get many familiar names and places, albeit mixed in a blender of modern disbelief a la Shaun of the Dead.  In fact, that's a pretty good- if hefty, for some- comparison to make.  This film manages to balance the tone throughout, however, giving it a slight edge for me.  I don't want to spoil too much of this film for you, so this is a, big shock, Review in Pictures.  As a side note, I've been meaning to do this review for about a month, so I hope you bear that in mind.  Get out your bleak, family pictures as we try to find... 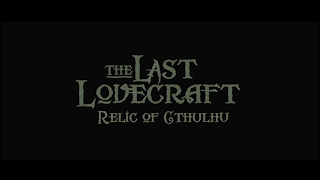 * Right off the bat, we see the film begin at Miskatonic University.  You could have used yellow font or something, since you can barely read the name though... 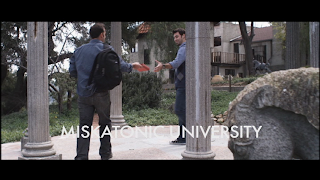 * Two men are killed at sea- ironically, they appear to be a C-List Pegg and Frost- and one of them becomes Starspawn, Cthulhu's lead general.  His goal- unleash the Old One! 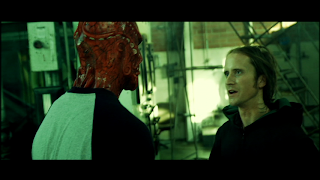 * Confronted by a man from the University, our hero is told a tale of Cthulhu's might.  This.  Is Awesome. In.  A.  Can! 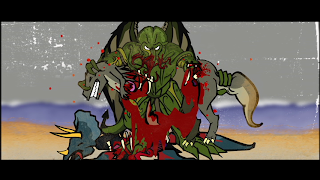 * "I can kick more military ass than the Decepticons," says Cthulhu, driving all those in range mad. 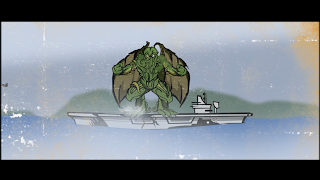 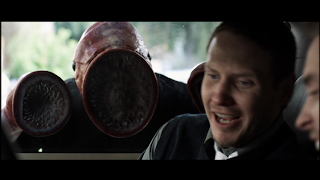 * Their only hope is to be joined by this Brian Posehn-looking guy.  The world is screwed! 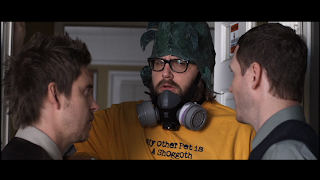 * A sea captain in the desert- why not?!?  He's a surprising hero, which is what they need right now. 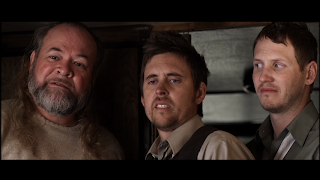 * That giant squid monster is tearing the place apart.  You should probably do something.  Oh yeah, save the world too. 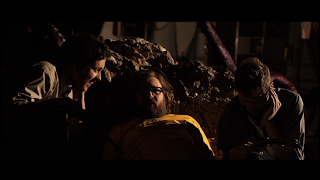 * In an Epilogue, our heroes journey to a set of famous Mountains.  I hope they find Guillermo Del Toro there!  The End. 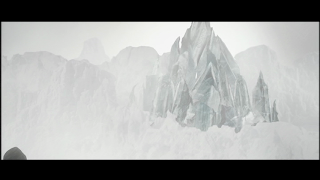 A movie that actually cares about the source material- GASP!  The plot of this movie is silly, fun and actually kind of neat.  It's simple- Cthulhu is waiting to be unleashed and only one guy can stop him.  The idea hinges upon a unique aspect of being in Lovecraft's bloodline, hence the character's importance.  The film does a good job of actually explaining all of this, as opposed to that other Cthulhu film which never explained a damn thing!  One key thing is that the movie is a mix of horror and comedy.  As someone who really does not like horror-comedies- i.e. Severance, The Cottage- I can tell you that this film is good.  The balance is struck just right, making the situation still seem dire at the right times and making you laugh at the right times.  Is it perfect?  No.  It would be nice to see some of the digital effects done better, although the suits and masks look great.  If you like Lovecraft, you owe it to yourself to check out this movie.  It shows that people with a small budget, a dream and heart can make something good.  If I can help get this film more exposure, I'll be quite happy. 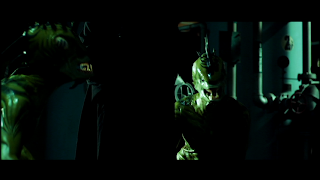 Next up, The Asylum is back to haunt my dreams in the first of 6 movies this month!  First up, there's Snakes on a Train- sigh.  Stay tuned...
Posted by Alec Pridgen at 2:38 PM