Lock Me Up!: Dragonquest

No, this is not at all related to the other film.  Yes, yesterday's film was called Dragon and this film also features a Dragon.  Yes, this title would actually make more sense, as they were 'quest'ing to find a Dragon in that film.  In this movie, they are looking for a bunch of gems that will let them summon a Dragon.  It's similar, but not the same.  This one has Marc Singer in it though.  That's right- the star of Beastmaster, Beastmaster 2: Through the Portal of Time and Watchers II.  Okay, so it's not the best resume out there.  In spite of that, I'm a fan-boy for the guy...which makes this one even harder for me.  After growing up watching him kick Rip Torn's ass with a tiger, I now get to see him doing his best Yoda impression with a young actor that serves as a charisma black hole.  The villain of the film is Brian Thompson, who many of you may know as the villain from Cobra.  He's apparently a big enough star to barely appear in this movie- good for him!  Before I talk more about B-Movie Actors, let's go on a less-than-exciting... 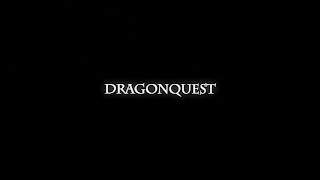 War is raging in the countryside.  No, I'm not using Cut and Paste for this review- the screenwriter is!  This time, we actually get a few shots of the war and all that.  What a difference a year makes in Asylum films!  The whole thing involves an evil dragon who has been summoned by a wizard (Thompson).  Our hope rests with a young man trained by a good wizard.  We first see our hero oversleeping and then trying to spy on a girl when she changes.  This country is screwed!  Before we can get a handle on the characters, the war hits home and the good wizard is killed by a fire dragon.  That thing looks kind of neat, but I would rather just show you this as my transition shot... 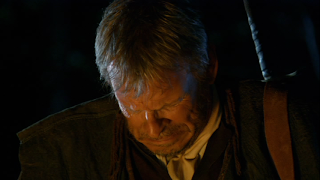 Our hero goes on his journey to find a bunch of magic stones and summon the good dragon.  He ends up meeting a young, female warrior and Singer, whose job it is to make funny faces and talk like a Muppet.  Did he do that as a joke or was his character really written like that?!?  The stones he needs to get are representations of the many virtues, like patience and kindness.  A hunt for a series of objects- I've never seen this plot before!  Meanwhile, we get the best representation of the war so far.  A group of people- buffered by CG models- swarm across a field to fight the evil army.  I won't say that it looks bad, but I've seen more realistic battles on 'Deadliest Warrior.'  It is kind of funny though... 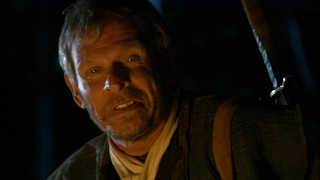 Our hero continues to gather the gems, but the wizard and his army continue to push.  We finally get one moment of Singer being bad-ass as he stops making faces and actually fights people.  Wow, that one scene totally redeems...nothing.  Our hero gets all of the gems together, but gets betrayed by his female helper.  She was apparently mind-controlled at some point, but gets over it.  She has a fight while our young hero manages to summon the good dragon.  With only about ten minutes left in the film, it's about time!  The kid and Thompson (in only his third scene) have a Harry Potter-style duel and the day is saved.  The End. 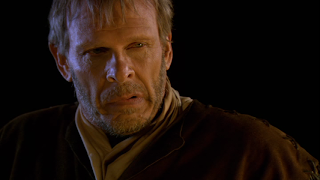 This is not a quest to be undertaken.  The plot of this movie is decent, but suffers from a lot of the usual stuff.  Our hero is not good.  The quest is not all that interesting.  The villain is on screen so little that it's hard to care.  The only selling point for this movie is Marc Singer, which is why his squinting mug is smack dab on the DVD cover.  Hell, I did the same thing throughout this review!  To be fair to the film, some of the Special Effects are neat.  They're not good, but they're eye-catching in their own way.  Now, if you compare this film to Dragon, it's great!  This movie is a whole story (albeit rushed and awkward) and doesn't make you feel like the Producers are intentionally avoiding another plot because it's too expensive.  Of course, if Dragon is my scale for quality cinema, there is no point in pretending that I'm a film critic anymore.  Here's one more Marc for the road... 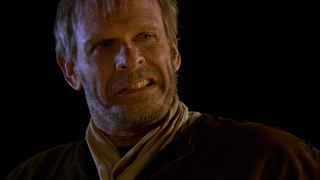 Next up, I cover the sequel to Paranormal Entity...which is not related at all.  I hope you like 75 minutes of jump scares!  Stay tuned...
Posted by Alec Pridgen at 11:53 PM

Email ThisBlogThis!Share to TwitterShare to FacebookShare to Pinterest
Labels: dragon, The Asylum