Two Films in and things aren't looking great.  To find out if I got my 40 cents worth, read on... 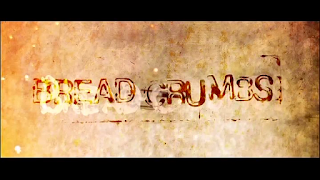 A small Crew of people go out to a nice Cabin in the Woods (shocking, I know).

Shall we do the Check List?
- No Cell Reception.
- No Cops.
- Nobody around for miles. 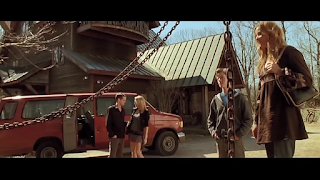 They see two kids- one is, but the other is at least 20- and a doll keeps of theirs ends up at the House. 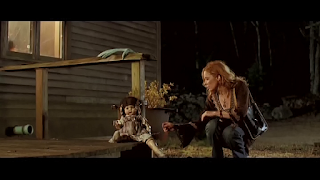 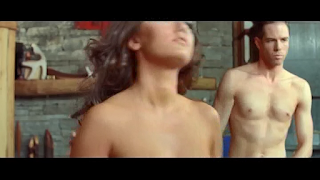 The 'kids' and an unseen stranger (that or it's bad Editing) attack one of the group outside & act weird. 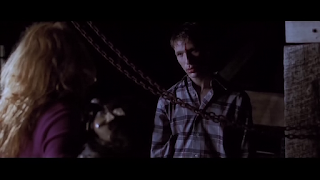 The group finally goes out and things go pretty badly.  No direct SPOILERs, but, well, blood. 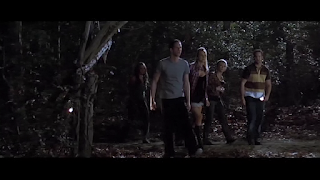 Can they survive the night?  Will they find out why they are being attacked?  Will you care about the Hansel & Gretel metaphor they keep pushing? 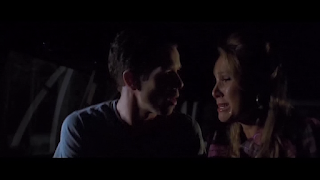 It's not really good.  It's not really terrible.  It's...just kind of there.  The Film's Plot is all sorts of generic and meh.  People go to Woods.  Creepy people are in Woods.  People get killed.  The best they can add is a decently-Animated Opening Credits and the whole 'Hansel & Gretel' thing.  The Film has what they considered to be a twist, but...I mean, it's not.  It's super-obvious from the beginning.  Was someone supposed to be fooled?  Was it a trick?  The big draw to any of these Films is the creativity and execution of, well, the executions.  In this case, you get arrows, a knife and one tiger trap.  They keep going back to the first two, which is a little sad.  You really had nothing to add, did you?  The gimmick of the killers is nothing special.  Two 'kids' being behind it is not shocking in 2011 or 2018.  The whole Hansel & Gretel thing also adds pretty much nothing new.  Bread Crumbs is not a good Film.  It's just also not so bad that it's, well, good.  I was going to give them one point for the red face birthmark on the main 'kid'...until I realized that they stole that too. 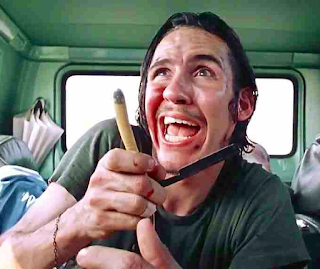 A pretty harmless Film that at least has enough Plot to fill an Hour.  It's just not bad enough to good or good enough to be good either.
Posted by Alec Pridgen at 4:54 PM