A silly, silly Film finally gets its due.  Today's Film is Death Spa, a 1989 Film that I must have mentioned at some point in the past.  It's ridiculous.  It's fun.  It's...bizarre.  The Title really sells you, doesn't it?  How can you not want to see this Film if you love cheesy Horror Films?  As Physical Fitness suddenly became big again in the '80s, Spas and Gyms started popping up like Rabbits.  As such, someone was inspired to make this bizarre Film.  The Plot involves mysterious accidents happening at said Gym.  As the bodies pile up, what is the source?  Is it just plain murder?  Is it industrial espionage?  Is it something weirder still?  The Film is chock full of silliness, melodrama and bloody death.  To find out if that all mixes together, read on... 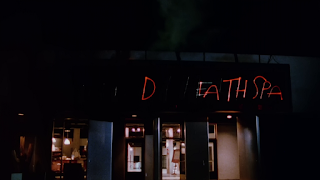 After some Training, a woman is trapped in a Sauna.  She breaks her way out...which suddenly ends up with her temporarily-blinded.  None of this makes sense, but it is still the most plausible thing you'll see in the Film. 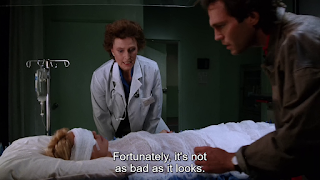 The place is officially run by two Brothers, although a Brother-in-Law and ex-Spouse also have a part to play.

Based on the wall art, I'm calling it now- it is Native Americans back for revenge! 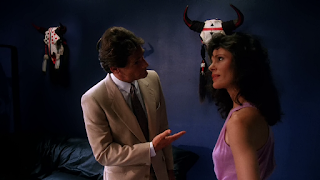 The place is investigate by some Cops, including a guy I dubbed Fat David Warner. 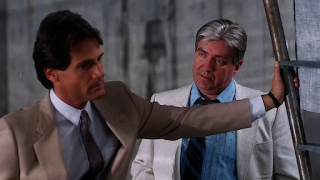 As more strange things happening (like a diving board breaking), we learn that the Gym is computer-controlled, meaning that they can raise the weight on machines or increase resistance.

Also this guy is the twin brother of our Hero's dead wife.  Nothing to see here... 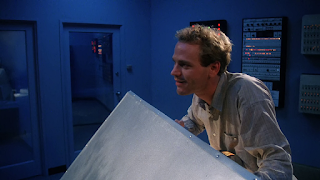 In the bit silly enough to make the Poster, this guy is stuck on a Butterfly Press (which has leather straps on it!) as the machine is turned up to 500+ lbs.  This...kills him...somehow. 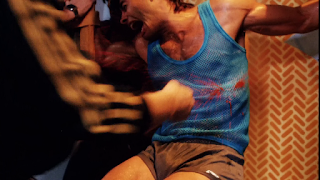 Desperate, the Owner goes to see a Psychic who tells him all about an evil spirit.  Info dump time...

The man's wife went crazy after their child died in an accident and killed herself.  Now it seems like she might be back for revenge! 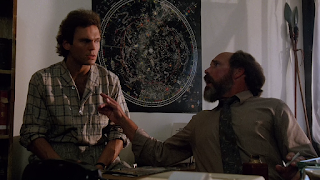 More 'accidents' happen, including this lady slowly-killed by burning water from a pipe. 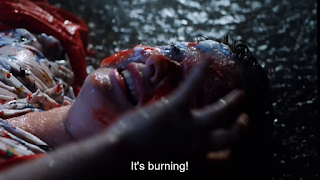 ...all I can think of is this bit from The Simpsons (back when it was funny).

It all comes down to a big Halloween Party at the Gym (as you do) and the spirit takes over the half-brother.  All sorts of crazy stuff goes down, from hands in blenders to dead fish being used as weapons! 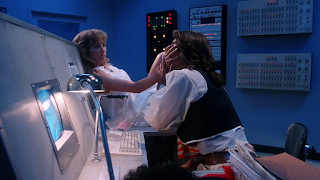 In the end, he manages to fry the computer system (and not himself) & a few people survive.  That includes Ken Foree, putting an asterisk on that cliché.

The spirit's new body vows to keep coming...but then the eyeball explodes and it stops.  The End. 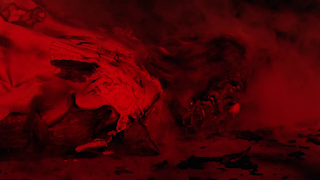 Strange, strange stuff.  Killings at a Gym- solid premise.  Strange events where machines malfunction- interesting.  Murder mystery Plot- good.  A resolution that somehow involves a vengeful Ghost using said machines to get revenge- silly as hell!  The explanation for everything happening is just plain weird and hinges upon the whole 'computers control everything' bit.  It must just be like how Stan Lee thought that Magnets could do anything in the '60s.  Again- why have your place built this way?!?  On top of that, the Ghost plays with things way too much for it to make any sense.  For instance, making wall tiles shoot off.  For another instance, controlling dead fish in the Freezer and making them attack (see below)!  The whole thing is just bizarre, but I kind of love it.  It gets very, very gory at times, so bear that in mind.  All in all, it's silly, stupid fun for people like me. 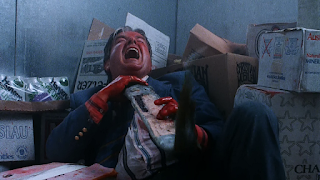