Michael Meyers killed many people.  As a Child, he killed a family member.

As an Adult, his first victim is far less remembered.

In Halloween, Loomis drives towards Haddonfield.  He warns them ahead of time to be prepared, even if they won't listen.

As 'luck' (or convenient Screen Writing) would have it, he finds an empty Truck and...

The body of a Trucker- not mentioned by name- who Michael killed and took his iconic jumpsuit from. 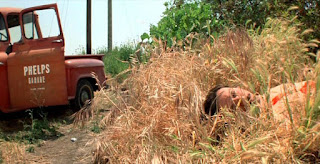 That poor guy- what did he do?  He just happened to have a close enough in-seam to Michael Meyers!

The moral: don't drive a Truck like that.  It didn't work out in the long run for Fred Sanford, that guy from Chico & The Man or this guy.

Next time, Michael's other less-famous victim.  He's more adorable than this guy.  See you then...
Posted by Alec Pridgen at 10:00 AM