My Crazy Youth: The Time That 'Gargoyles' Battled a Magical Werewolf on Halloween

Gargoyles was great.  It got a bit weird by the end- where they once teamed up with King Arthur to battle Macbeth!- but it was always quite good.  It's a weird premise- granted.  If you don't know, here's the summary- Gargoyles are 'monsters' that only live at night and turn to stone during the day.  They were betrayed Centuries ago and awoken in the Present Day (of the early '90s).  I haven't done enough on this Show, which I vow to do better about.  I picked this one to do now since, well, Halloween.  I watched it a bit ago, but obviously had to wait.  I can explain the actual Plot in the Review, but know this- Odin's Eye.  That's a thing.  To find out how much weirder a Show already about nocturnal Monsters in Manhattan can be, read on... 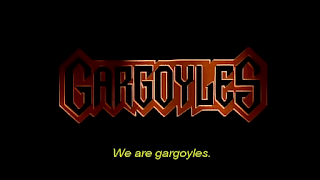 Xanatos- this Show's Lex Luthor, but with nuance- gives his girlfriend- a former Fighter with a face tattoo- a gift as part of their engagement- Odin's Eye.

Seriously, a Fighter with a face tattoo.  Mike Tyson must have been inspired by this Show. 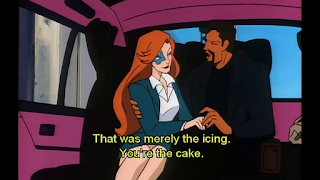 The Eye is a magic amulet- naturally- that has a surprising effect.

Well, it would be a surprise if you didn't read the Title of this Post somehow. 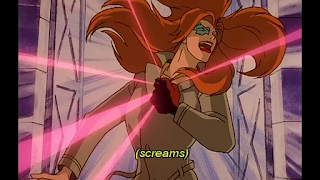 Yep, it makes her a werewolf, since the thing somehow magnifies your inner self...or something.

She goes on a nightly robbing spree, but doesn't kill anyone, since Kid's Show. 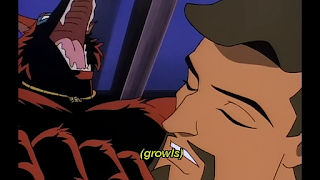 Xanatos- seen here in his Iron Man Armor- tries to get Goliath- the Leader- to help, since he's a nice guy.  Elisa- their friend and possible love-interest to Goliath- says that it must be a trick.

To be fair, he was, is and always will be a dick.  He's just being sincere this one time. 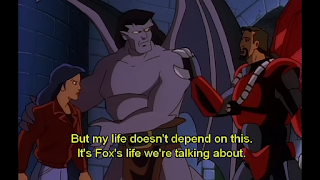 The Halloween thing comes up in two ways...

1) The rest of the Gargoyles are excised to a B-Plot where they love being able to walk around in the open.
2) Elisa is pulled from a Costume Party so that they can be this very-subtle Beauty and the Beast metaphor thing work.  Also Disney. 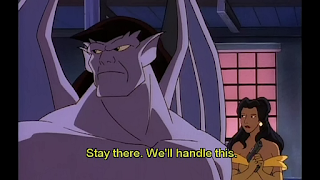 Working together, the pair stop her enough to take the Eye away and restore her.  It goes to Goliath, setting up random stuff I'll cover later.

And now, there were no side-effects from this electrocution or the many forced transformations.  The End. 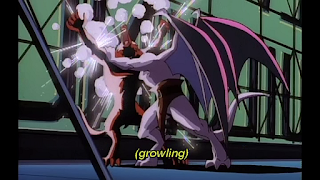 A good Episode, even if they lay it on a little thick.  To be fair, I am an Adult watching a Show aimed at a younger demographic.  That's not a be-all-end-all excuse for any Kid's Show- just a reasonable thing to think.  In any event, the actual Story is nice.  You can see a rich guy giving a fancy gift to his fiancée- it just happens to be magic.  This is a world where Gargoyles exist, so why not?  The Show only got weirder from here- including introducing Characters like Iago, Proteus, Oberon and The Lady of the Lake, just to name a few.  The Show was always well-animated, well-Scored and well-Acted.  I'm sure that there are weaker Episodes, but I don't think it ever got bad.  This one is close to being too 'on-the-nose' at times, but reins it in pretty-nicely.  The only downside for me is how little they use the Halloween setting for the Story.  It's there for one or two bits with the other Gargoyles, but that's it.  The main Plot is good enough to make up for this though.  When it comes to underrated '90s Shows, this guy sums it up best... 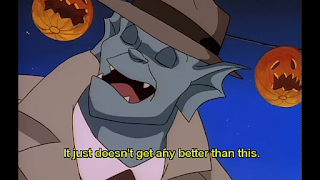 As far as Halloween Episodes go, it's nothing special.  As far as Kid's TV in the '90s, the Show, as always, delivered.
Posted by Alec Pridgen at 1:24 PM