Alright, Internet- you win.  In spite of not really liking All Hallows Eve and not caring about this Clown, I watched the Movie... 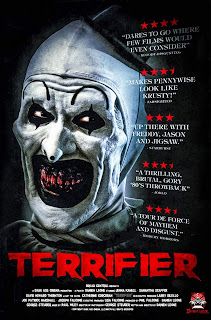 This is Art the Clown.  He wants to be the next Jason Voorhees or Freddy Kreuger.

Is Art really the best name that you could come up with though? 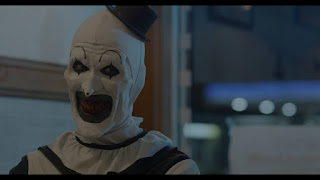 On Halloween Night, these two ladies are leaving a Bar.  They are so screwed! 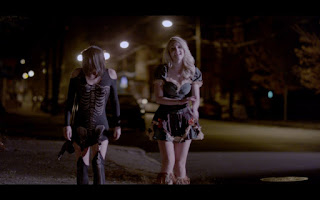 He targets the pair (for no reason) and the Movie wants you to believe that you can dress up like this AND act like this without anyone calling the Cops on you. 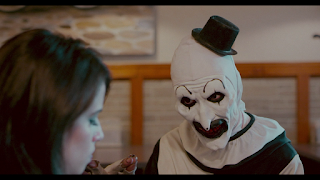 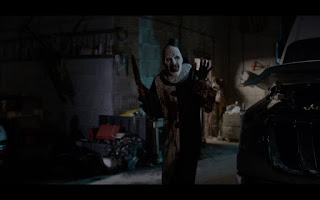 While he targeted the girls, he'll basically kill anyone in his way.

Since this Movie is low-budget, that's basically just in and around this one Building.  Enjoy. 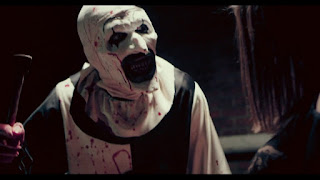 Who will live and who will die?  It's probably everyone, but, you know, still watch it...I guess. 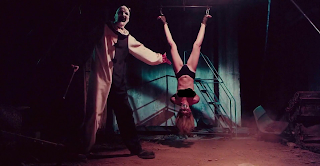 If you want blood, it's got it.  The Film is great if you like lots of gore, splatter effects and body mutilation.  Am I done with the positives now?  Yes.  In every other regard, it's not so good.  The Setting- dark Streets in a City and a dank Building.  The Plot- strange killer murders people.  They try to spice it up with a random opening and a final Twist, but that doesn't do much.  You're pretty much stuck with 'people get killed' for the entirety of the runtime.  No nuance.  No Subplots.  Nada.  That brings me to the bigger thing- Art the Clown.  While not the worst attempt at a new Horror Icon- that's probably still the thing from The Fear Films- , he's just both too little and too much for me.  He's too little in the sense that he's just a Clown that kills you while smiling.  Does he have an interesting backstory?  No.  Does he have a gimmick or anything to show other than being a Clown?  No.  He's also too much in the sense that this is so forced.  It was pretty bad in his first Film, but you can at least excuse that as the first attempt (not counting the original Short).  Here he's graduated to a Lead in a Feature and he's a real Mary Sue as far as Horror Icons go.  He's always ahead of you, always has a weapon and is almost never caught off-guard.  He's like a skinnier, less-molesting (allegedly *wink wink*) version of Steven Seagal- only he ruins your lives and not U.S. Democracy.  Without SPOILing too much, they also give him vaguely-defined powers that are basically just plot convenience.  If you just want bloody gore, this will satisfy your cravings.  If you want anything else, stick to, well, anything else.  One last thing- who made this Poster without having seen the Movie? 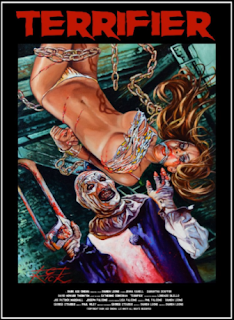 A decent Film if all you want is gore, gore and more gore.  If you want Plot, Characters and mood, look elsewhere.
Posted by Alec Pridgen at 10:08 PM