Impossibly-Cool Cover Art: The Creature Walks Among Us

After seeing the Film again last Saturday on Svengoolie, I can attest to this one.

With the 3rd and final (so far) Creature from the Black Lagoon Film, they pulled out all of the stops to advertise the Film.

It's also the only one not in 3-D, so they pulled 'some stops' to make the actual Film.  The Cover is still great though... Oh wait- he's normal-sized...and out of the water...and wearing a burlap suit now.

At least the two guys from This Island Earth are in it. 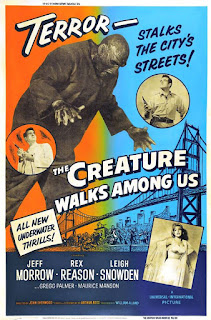 Why is the Poster in Color, but the people not?  I amended that silly oversight just a bit for you.
Posted by Alec Pridgen at 11:14 PM