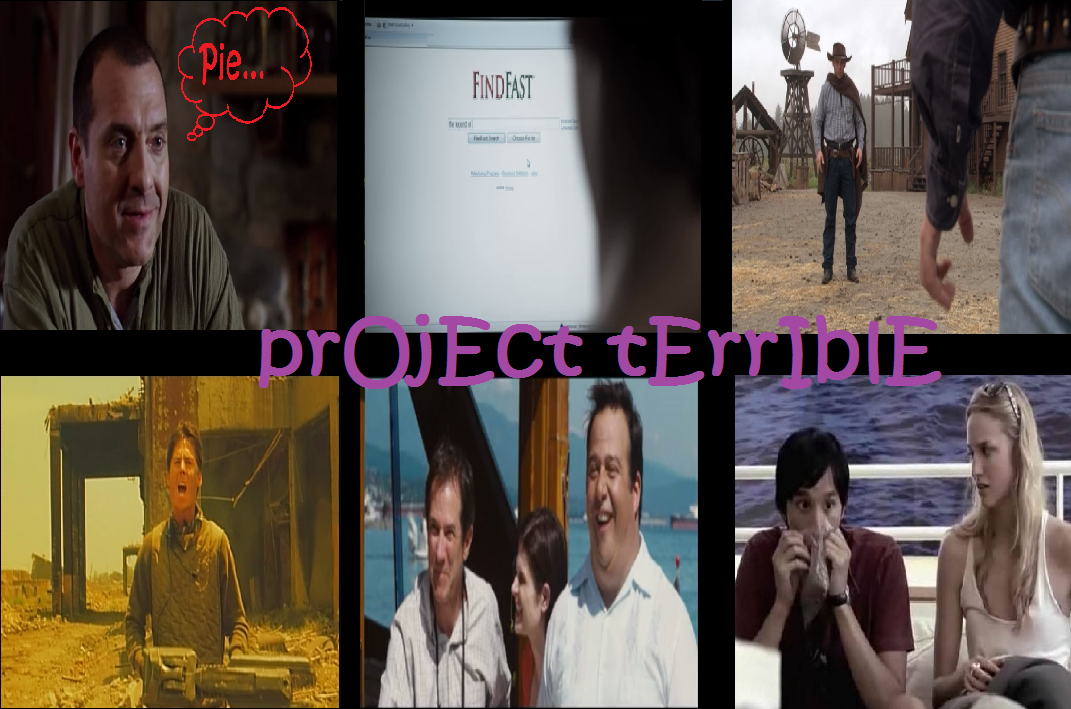 If Halle Berry was nice enough to accept her Razzie Award for Worst Actress for this Film in person, then I am nice enough to review it.  Today's film is Catwoman, not to be confused by the DC Comics Character(s).  I love that this Film has NOTHING to do with the material at all- it may not even be in Gotham-, but Bob Kane still gets his unearned Credit here for 'creating the Character.'  The short-version for non-comic nerds: Bob Kane was an asshole with a good Lawyer and has stolen credit (and the lion's share of the profits) for Batman and its related characters.  If he 'created' Catwoman, he still didn't create this lady!  The Film is notable for many reasons.  For one thing, it famous for being terrible.  It is.  Secondly, it is famous for being one of the best examples of 'The Oscar Slump.'  How do you win an Oscar and agree to do this Film within a year?  It always seems to happen and nobody is quite sure why.  You just know that Jared Leto is going to end up in a terrible Romantic Comedy within a year and Lupita Nyong'o will be on-screen opposite Tyler Perry by 2015.  The Film tells the tale of a woman who is saved by *sigh* cat-magic and becomes a super-hero.  Since she's a female super-hero, her villain works for a Make-up Company- of course I'm not kidding.  Why does that only work one way exactly?  Why didn't Christopher Nolan have Batman fight the head of the NFL?  Why doesn't Superman battle the evil villain Ed Hardy?  I, for one, want to see Spider-Man battle the Owner of Sports Illustrated while the Bikini Issue is being shot!  I digress.  To see why this Film is as bad, read on... 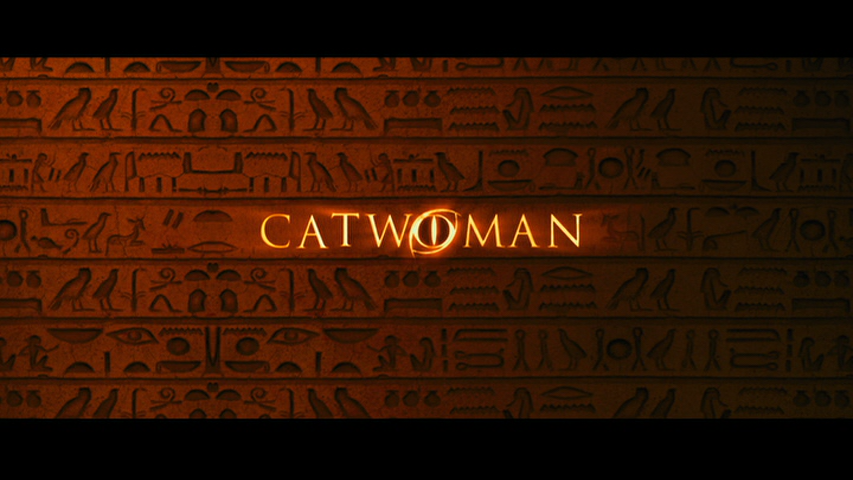 Berry stars as Patience Phillips (since that is a real name!), a Graphic Artist who doesn't stand up for herself.

On the plus side, her friend is Family Guy's Alex Borstein.  On the negative side, she's still using this Script! 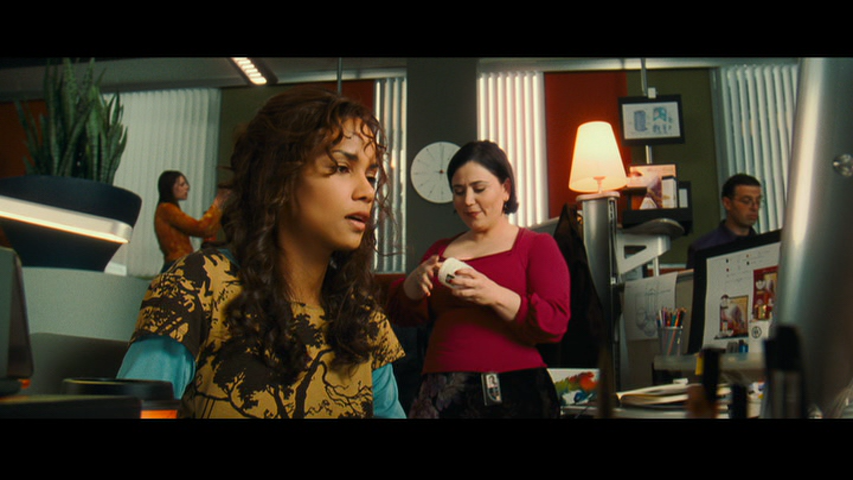 The villain is Sharon Stone as...well, Sharon Stone.  She's married to the Merovignian and has just retired as their Spokesmodel.  Oh and she is ALWAYS shot with this hilarious filter. 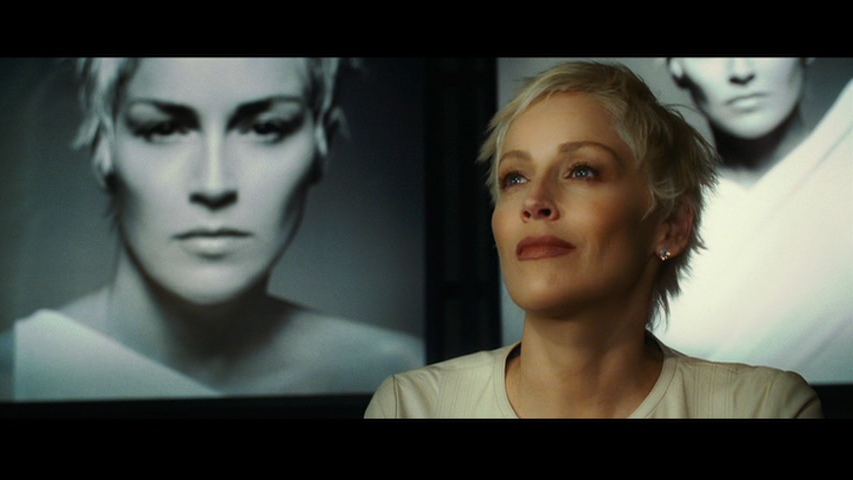 Patience hits it off with this Cop (Benjamin Bratt) after he thinks that she was going to jump from her window (when she was actually trying to rescue a magic cat).

Who said that romance is dead? 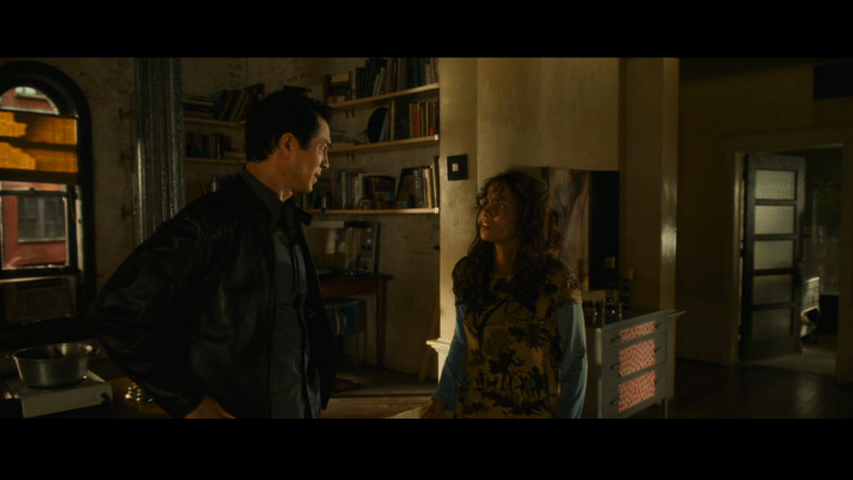 Through random chance and bad luck, she stumbles across the secret of how the company's product scars and mutates people.

For her discovery, she is flushed out of the world's largest drain pipe (since The Fugitive) and killed (maybe). 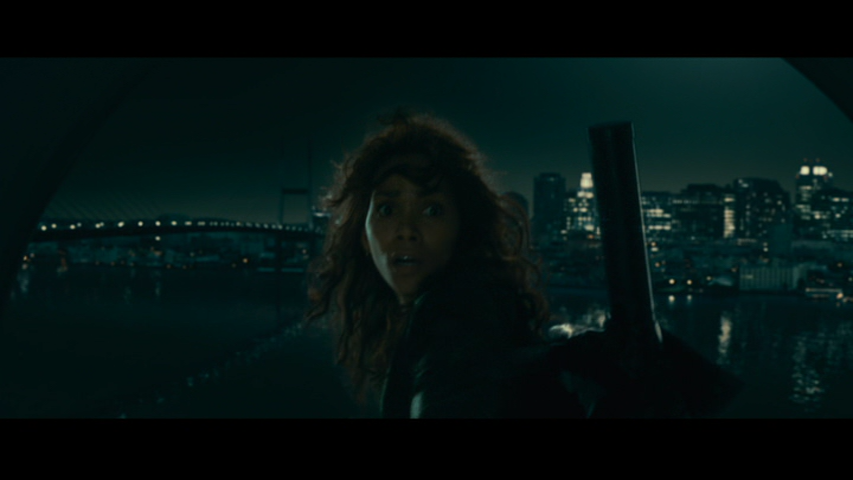 However, she is saved by 'magic cats' and becomes Catwoman.

I know, I know.  Some of you are saying 'Hey moron, that was what happened in Batman Returns too!'  Yeah, you're right...and it was stupid there too. 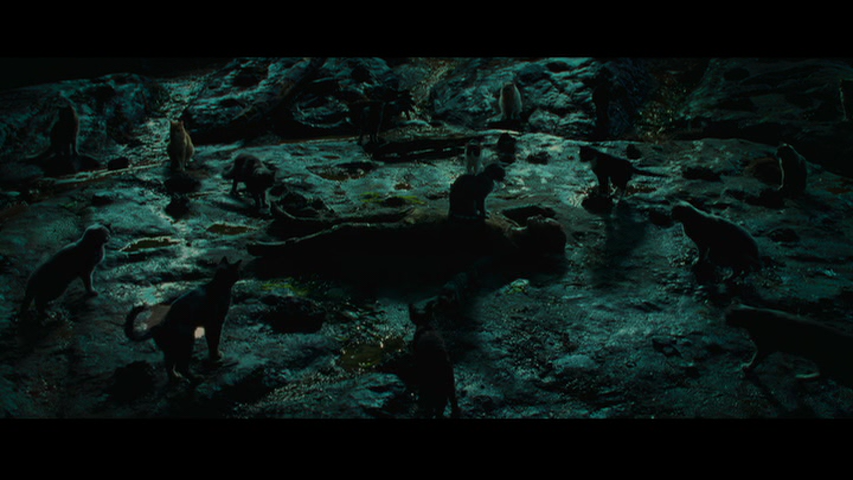 Now blessed with fast reflexes, enhanced senses and the ability to turn into an unconvincing CG double, she fights crime...or rather commits it.  She also has the ability to make rings appear on her finger in one shot before she actually puts them on in another! 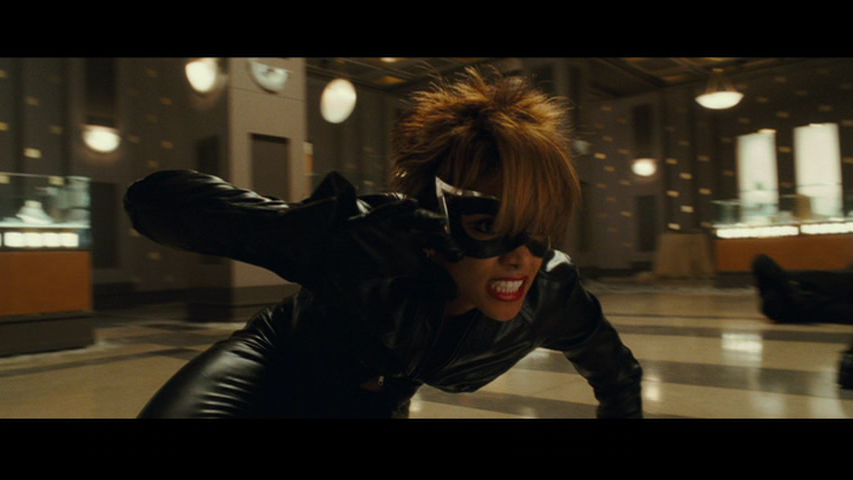 She meets up with the 'owner' of the magic cat from earlier and learns that she is one of a line of Catwomen throughout history.

Oh and sharp-eyed readers will notice that shot of Michelle Pfeiffer (who turned this Film down) from Returns here.  Continuity? 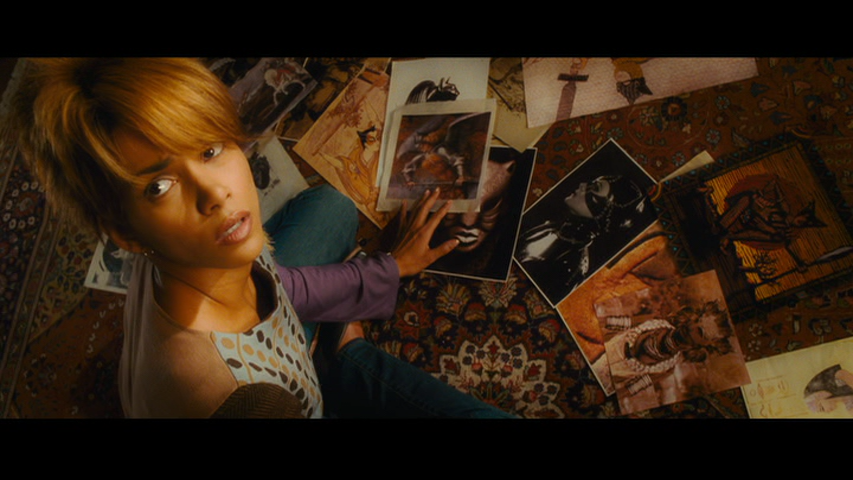 Our heroine slowly unravels the conspiracy of who tried to kill her earlier (as if we didn't know), but manages to get framed for the murder of Stone's husband.  She's arrested based on...a lipstick match?!? 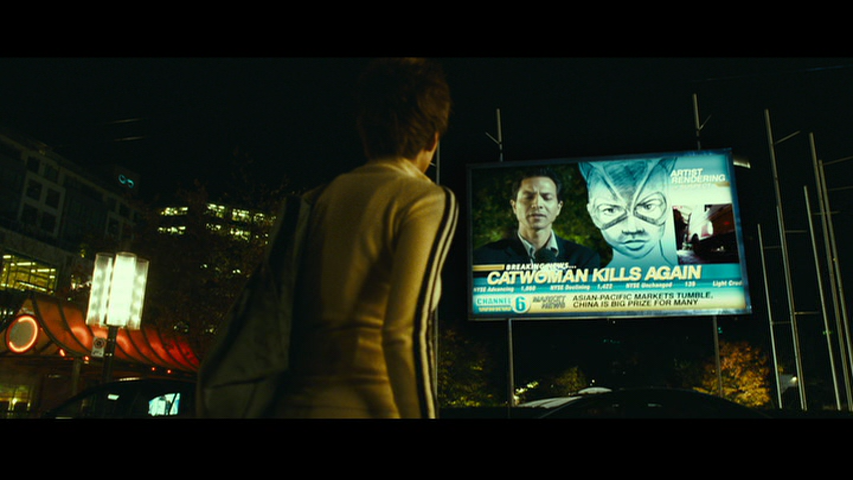 This all leads to a fight between Catwoman and Stone.  Her power: a lack of nerve endings in her face (although she is constantly recoiling in pain still)!

So yeah, this is lame.  Catwoman wins (by missing) and starts her new career of...series cancelled.  The End. 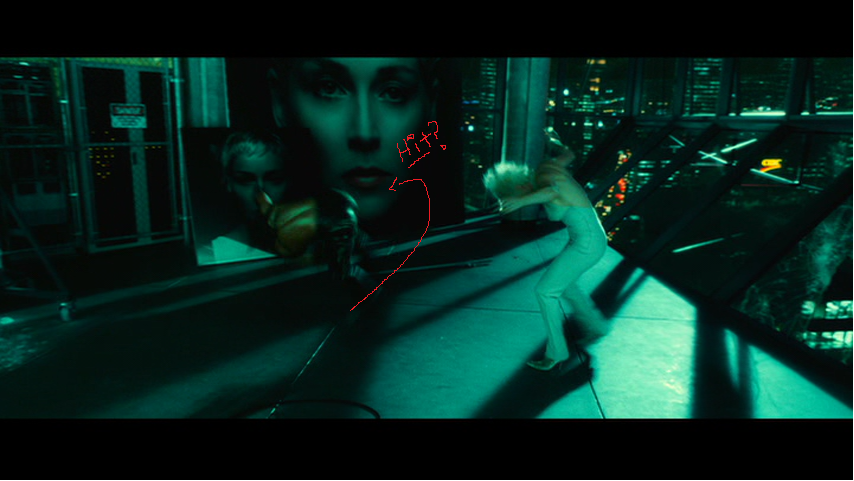 Meow- this stinks!  It is as bad and silly as you have heard.  The Acting is alternately-wooden and over-the-top.  Good Actors and Comedians are dragged down by the one-note Writing.  I don't hate them- honest.  The best thing the Film has going for it is its visual style, but that has problems too.  Catwoman was a box-office money loser and it is easy to see why when EVERY TRANSITION SHOT is a fully-CG panning shot.  Was that necessary?  I get it- you hired a French CG Artist/Director named Pitof.  That doesn't mean that you had to waste so much money on silly, dated-looking shots like these.  They look goofy.  Pitof's previous Film was Dark Portals, which was ridiculous fun.  It doesn't make a lick of sense in the End, but I enjoyed it.  As for this Film, it is...just ridiculous.  If there was a small bit of reality in this Film, it could have been a fun bit of fluff.  As it is, Catwoman is just fun for all of the wrong reasons.  For all of you out there who said that Daredevil was a pale imitation of Spider-Man, I would point you to this Film instead.  Take us away, silly and pointless CG establishing shot... 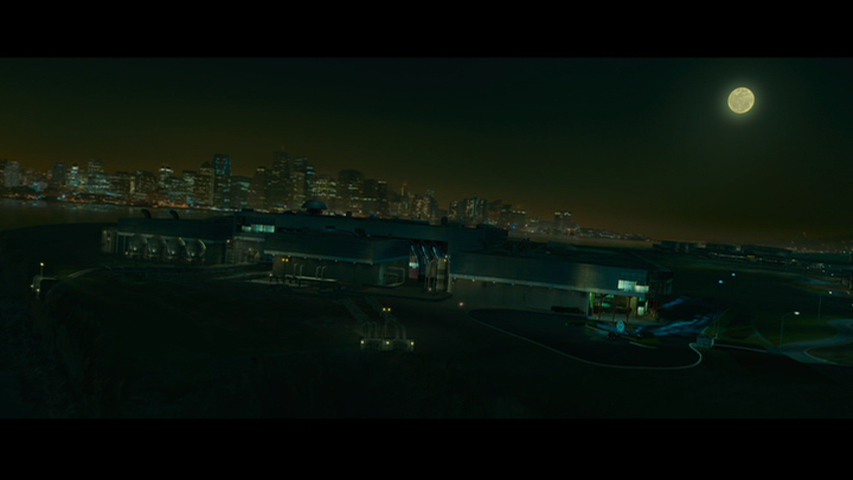 Next up, I celebrate 2,400 Posts with a Film Classic.  This may shock you, but I have actually never seen this Film until now!  Stay tuned...
Posted by Alec Pridgen at 11:59 PM