I get it, Maynard.  I don't agree with you, but I get it.  Today's film is Wrong Cops, a Film that dares to not really have a Plot, have a cast full of A-Holes and be filled with bizarre non-sequiturs.  This is a Quentin Dupiex Film, so you can expect it to be strange.  The exodus of the Film is this: Quentin liked working with one of the Actors in Wrong, so he decided to make a series of Short Films based around him.  People have made Movies for worse reasons, right?  The Terror was made when Roger Corman finished shooting The Raven three days early and had one lead- Boris Karloff- under contract for that much longer.  Not Of This Earth (1988) was made on a bet between Corman and Jim Wynorski that the latter could Remake the Film for the exact same amount as the 1957 Film.  Voyage to the Planet of Prehistoric Women (which I own) was made as a challenge to his protege Peter Bogdanovich out of Russian Sci-Fi Footage and a tiny budget for new footage with Mamie Van Doren.  So yeah, Roger Corman is related to a lot of silly Movies.  Wrong Cops tells the tale of a bunch of A-Hole Cops in Los Angeles.  That's about it, really.  The Film is made up of a bunch of short segments stuck together.  As a cost-saving measure, the segments were filmed as the Funding came in, as opposed to all at once.  It is a weird idea, but this is the man who made a film about a love-struck tire with Scanner powers.  I won't SPOIL the whole thing- since it is available on Streaming in the U.S. via Netflix-, but I will give you a taste of what is in it.  To find out more, read on... 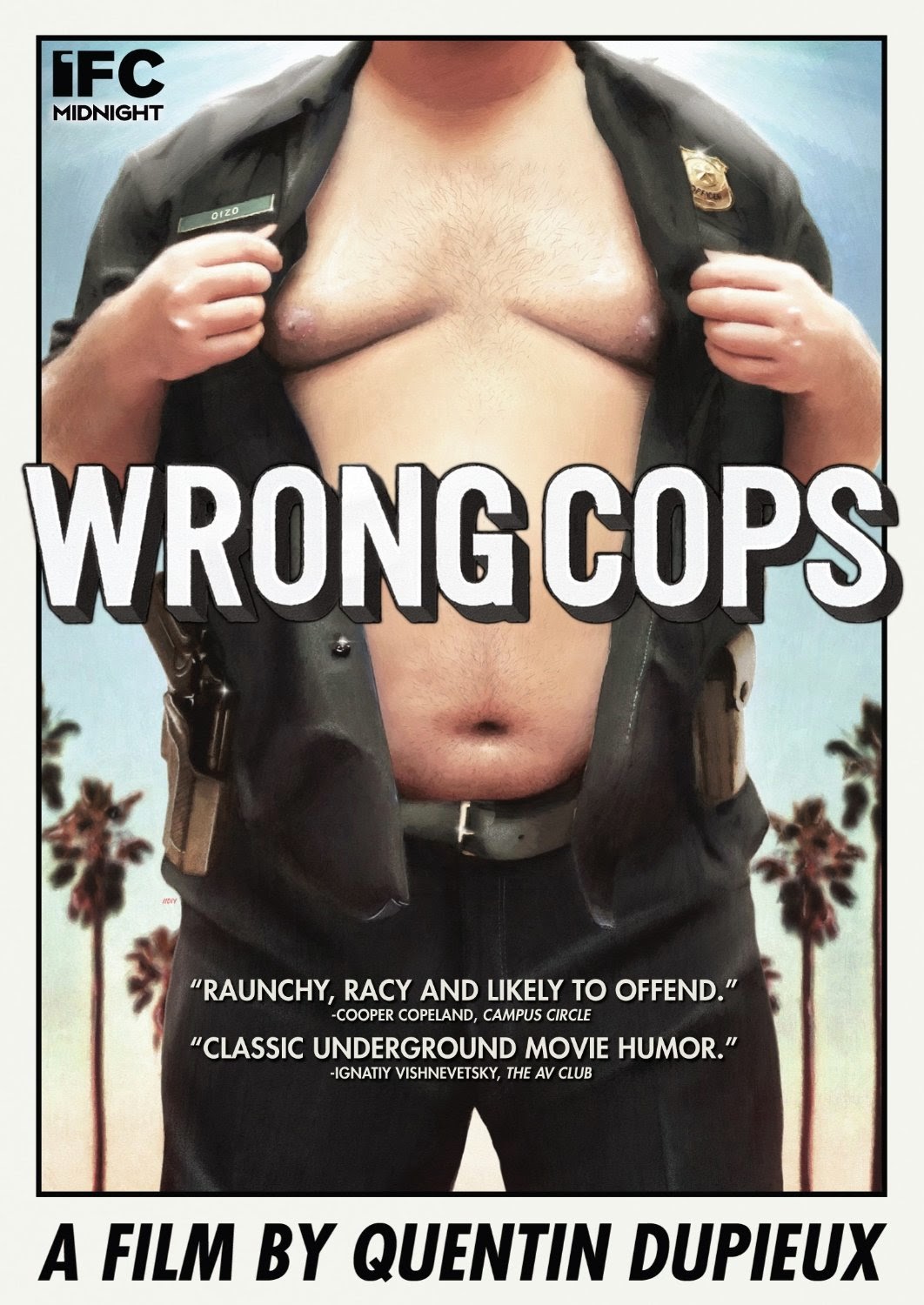 This is Quentin Dupiex.  He's a crazy man.

It is important to know who to love and/or hate before you start watching a movie. 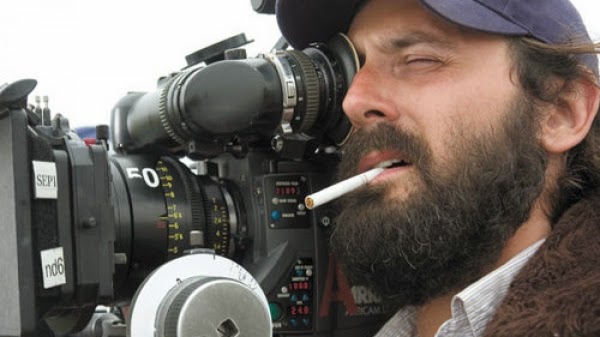 The man on the right is one of the titular Wrong Cops.  He's an asshole.

The man on the left is supposed to be teenager...but is actually Marilyn Manson.  Weird casting, right? 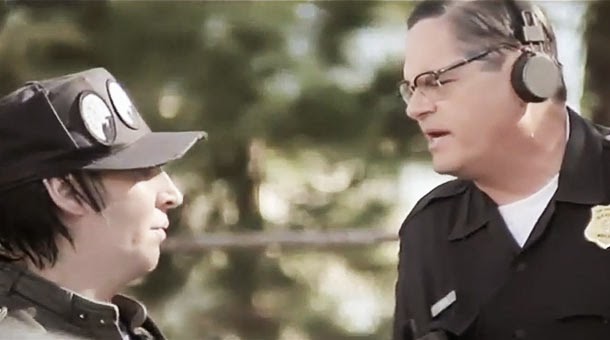 The man on the left is also being harassed by the same Cop.  He buys weed from the Cop- packed inside dead rats- and owes him some money.  He also has something to hide- which I won't SPOIL. 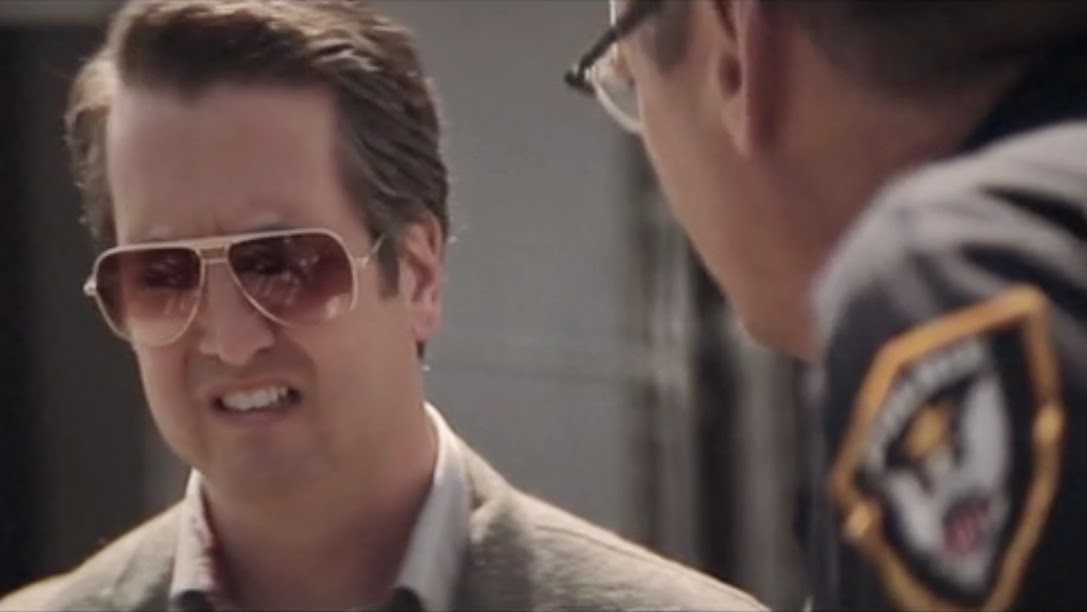 Daniel Quinn- aka Scanner Cop- returns as this poor guy who was apparently shot earlier and gets dragged around from place to place.  He's good if you want someone to critique your Techno Song though.

Of course I'm not kidding.

I should note that Eric of Tim & Eric is in this.  He's still not good, but he's much less annoying here. 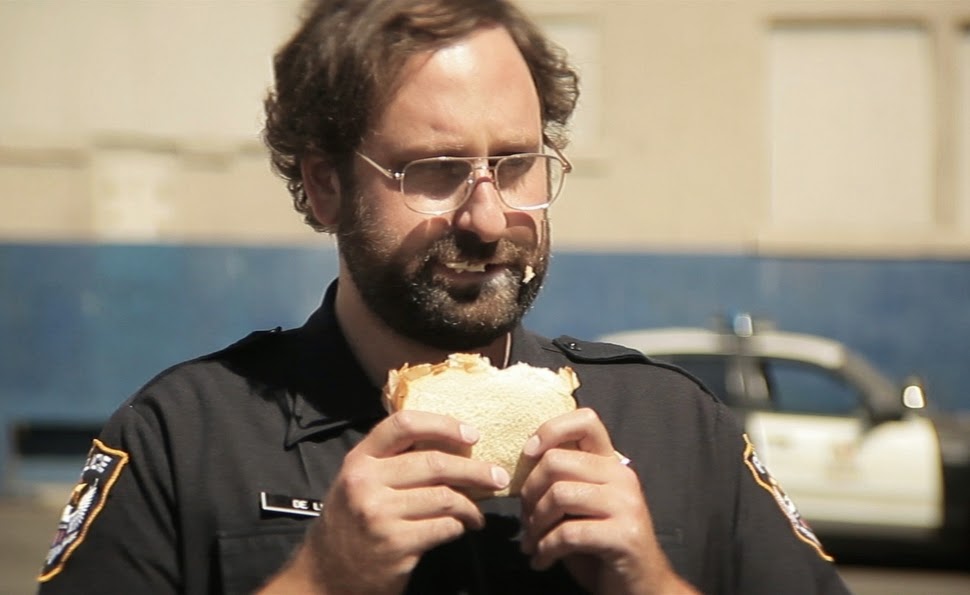 So yeah, I don't hate a movie featuring one half of Tim & Eric.  Big whoop- wanna fight about it?!?

I will not SPOIL what happens in the End (since it is too weird to explain anyhow), but I will leave you with my favorite Character.  The End.

I won't lie- this is weird and random shit.  Is it always funny?  Not to me.  Is it always interesting?  I'd say 'yes' to that.  You are never quite sure what is going to happen next, which works for some people.  The flip-side, of course, is that it is so random that is not always easy to keep track of things.  There are about four notable Plots here and they just kind of criss-cross.  It is kind of like a less pretentious and more crude version of Cloud Atlas.  The Film is really just a series of moments- for better or for worse.  I liked it.  You may like it.  You may not like it.  If your Country put up a bearded Drag Queen for a major world-wide Contest of Nations, you probably won't.  You know who you are.  In the End, this is going to be Dupiex's most divisive Film.  Here's a simple reply from Dupiex to all of his Critics (especially those who make Wrong puns all the time)...

Next up, I continue my journey through Project Terrible.  Since I gave nothing but Super-Hero Films this Round, it's only fitting that I do a terrible one of my own.  Stay tuned...
Posted by Alec Pridgen at 11:45 PM