Celebrate Mexican Independence with El Santo!  Truth be told, I've owned this Movie for a long time.  In fact, I *technically* reviewed it in the very early days of Mondo Bizarro.  It was a one-paragraph review that told you nothing about the Film.  Let's remedy that, shall we?  Today's film is Mystery in Bermuda, a quirky little tale of murder, international intrigue and...people who live in the Bermuda Triangle.  Yeah, this one is a bit odd, to say the least.  Basically, our heroes go to the Bermuda area and get dragged into a plot involving a Princess who must sign a Treaty to make peace.  On top of that, there's a B-Plot involving a secret society of Scientists who live in the Bermuda Triangle.  What does that have to do with anything?  I won't SPOIL it just yet.  You will the 'final' Film with El Santo, Blue Demon and WWE Hall of Famer Mil Mascaras together.  If that's not enough for you, well take another shot of Tequila.  To find out what the hell is going on here, read on... 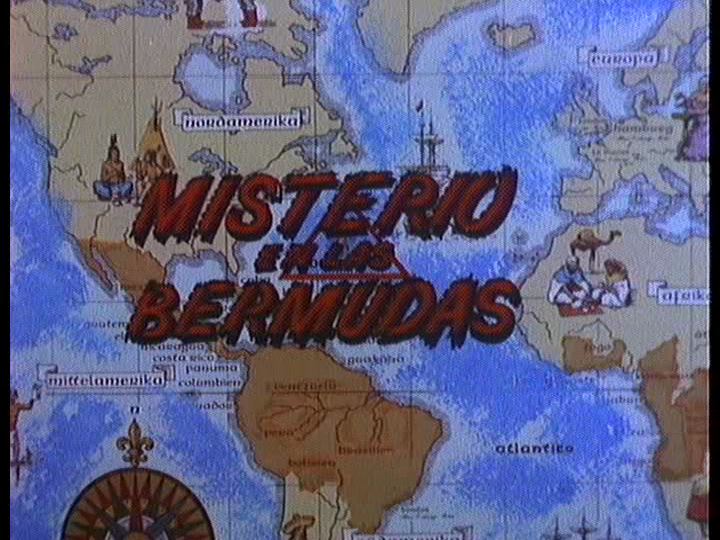 The film opens with...some guy and his friend fishing.  Some Mystery!

He apparently sets this whole thing up by saying that El Santo and company disappeared some time ago.  Okay... 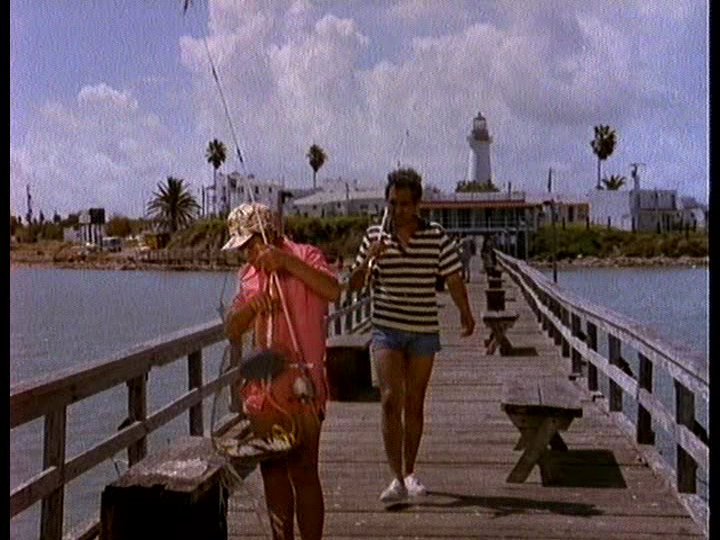 After some cheesy footage of a Storm and crashing water in a Sound Stage, we see the Luchador trio in the ring.  This is the best action you get.

It is short, awkward and goofy (as Santo and Demon were over 55 at this point!).  Think about that for a moment, won't you? 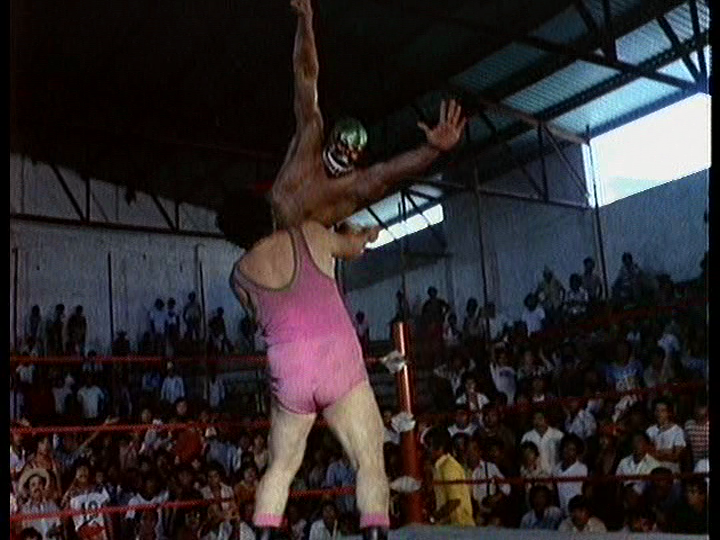 The trio hang around by the pool until they get called to an important meeting.  They are called to help with the security of the Princess of Irania (possibly an issue with the Subtitles).  Makes sense to me! 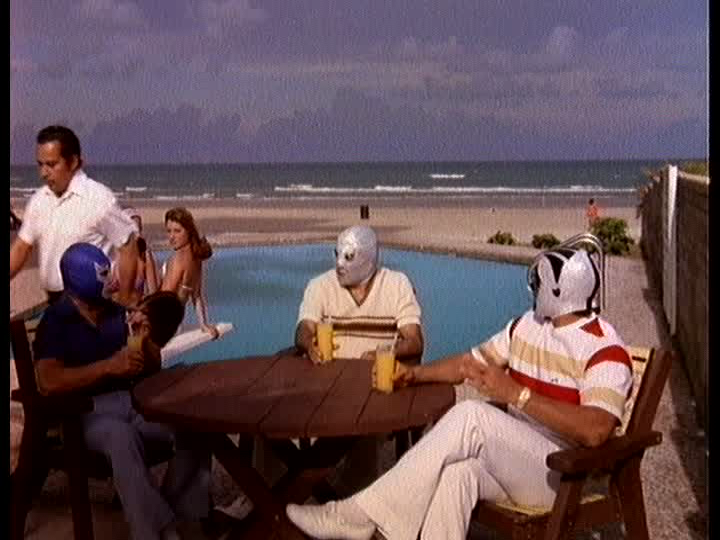 On the opposite side, we see a group of people trying to stop the signing of said Treaty.  They include a trio of ladies who work to get close to our heroes.

As it turns out, their sneaky plans amount to little.  Seems like they were just padding this out or something... 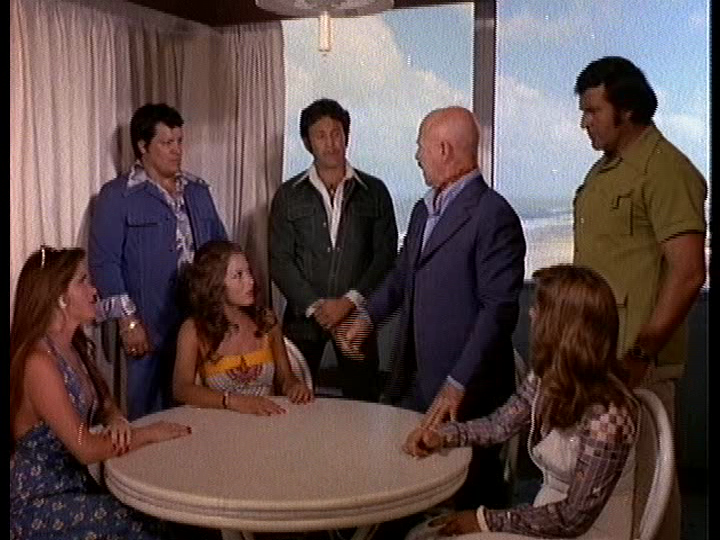 The whole plot with the teleporting Scientists from the Bermuda Triangle- it adds nothing.  It helps liven the shaggy dog of a Script though.

The issue: they have nothing to do with anything.  Santo and company never meet or are aware of these people.  They appear to just be added to cash in on the 'Bermuda Triangle Mystery' trend of the time (see Cardona Jr's The Bermuda Triangle). 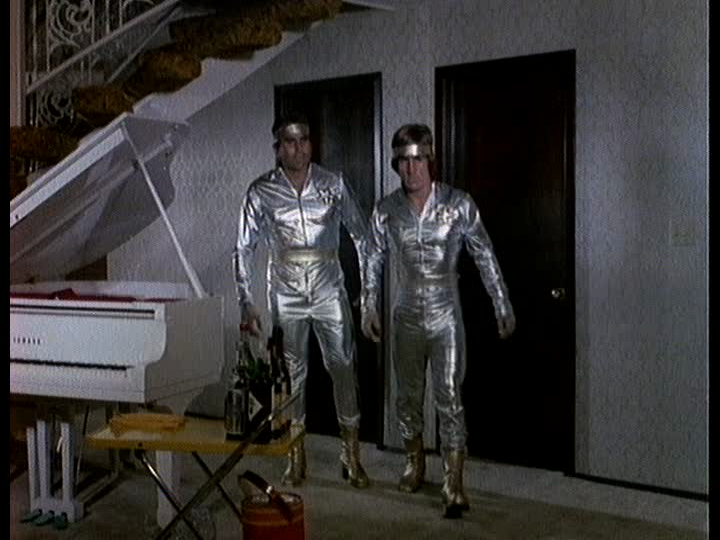 To pepper up the loose and confusing plot(s), we get a bunch of random fight scenes.  I totally didn't plan how this shot lined up- it just happened! 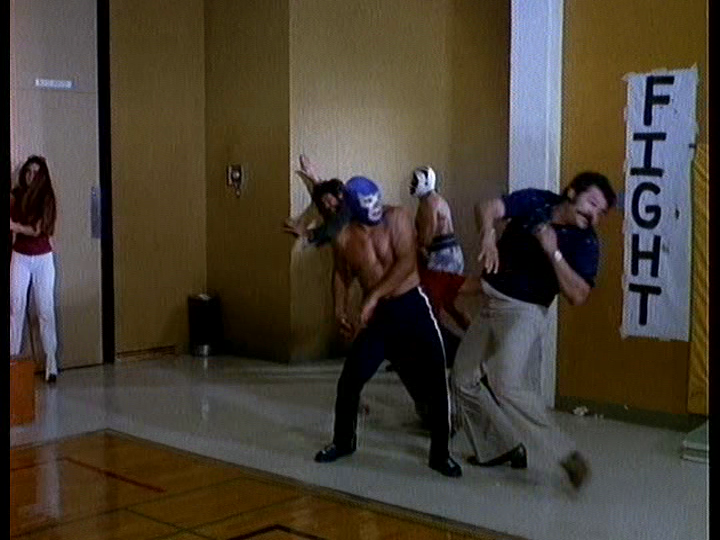 Seriously, why do Wrestlers usually do SO bad at Movie Fight Scenes?  Weird. 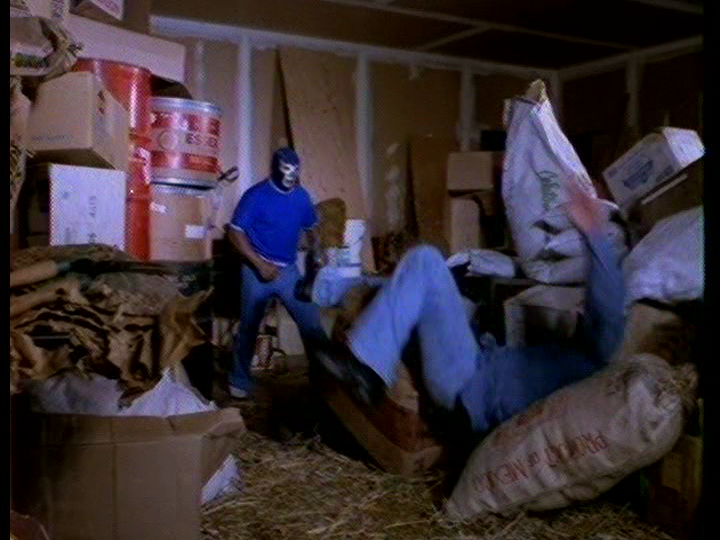 After leaving the Princess alone and nearly getting her killed, she *almost* defeats the remaining hitman (or hit man in the Subtitles)...but has to be saved.  Thanks, casual Sexism!

The Treaty is signed and the day is saved.  Unfortunately... 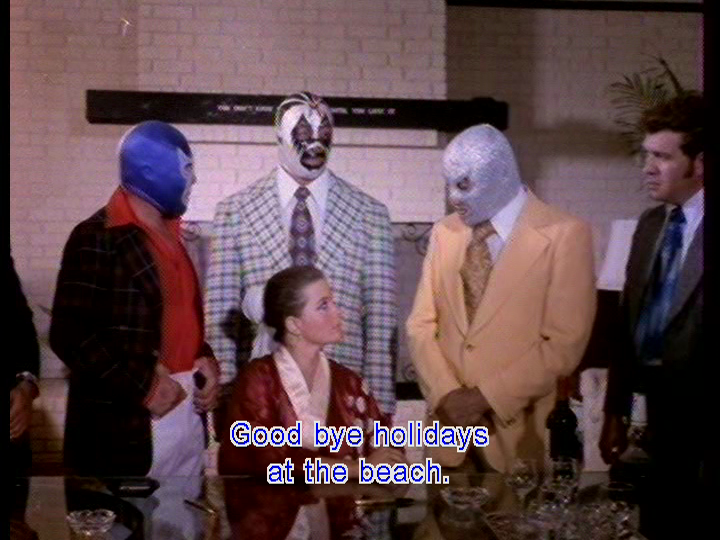 ...they didn't survive...or something, since they had already committed to this stupid tie-in already.  Weird way to do that.  The End. 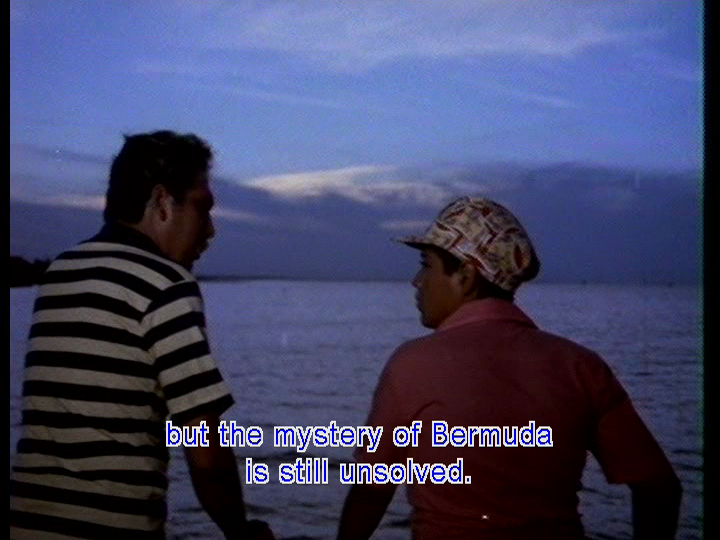 This could have been much less crappy.  The Story- pretty standard, but workable.  Unfortunately, it is paced so randomly that it is hard to follow.  On top of that, the shoehorning of the Bermuda plot just makes it confusing.  I had to go back and recheck the Ending to make sense of it.  The heroes save the day...but disappeared forever off-camera.  Who made this film- Godfrey Ho?!?  On top of that, the Acting is...oh man, the Acting.  To be fair, it is a film Starring El Santo, Blue Demon and Mil Mascaras- what do you expect?  Everyone else is not that great, which is surely not helped by the Dialogue.  Can you say 'forced?'  If you can't, I will make you!  The whole thing is hard to judge as a whole, since it is such an awkward mix.  The connection between the two Plots is the Fisherman- who appears twice with the gang- and a lady kidnapped by the Bermuda Gang (and never mentioned again).  The worst thing you can say about this movie is that it is not even best one on the Disc.  While it lacks El Santo, The Champions of Justice is just plain goofy fun.  Hell, it is not even the silliest thing in the package.  That honor still goes to the 'Inspiration for the film NACHO LIBRE Starring Jack Black' on the front of my blue (not black?) DVD this is from.  What?  Huh?  As a final thought, if your Prop Gun won't fire, just shake it back and forth like the guy in the blue jacket. 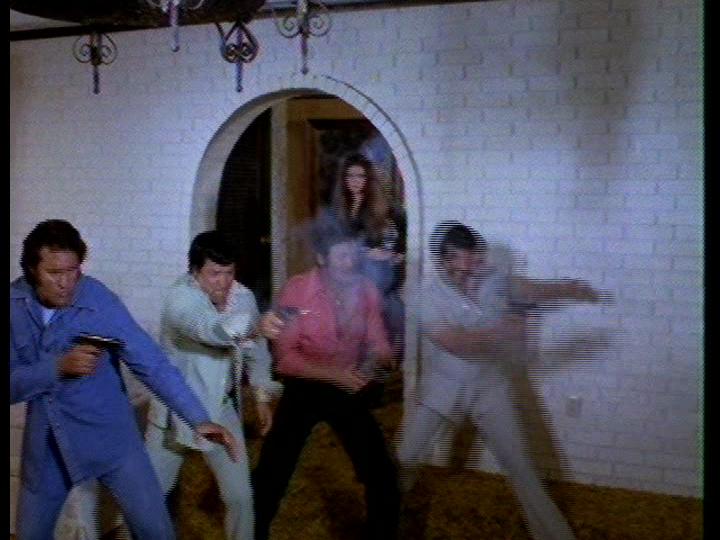 Next up, I tackle a cheesy Horror Film to tie in to a Kid's Film.  It will make sense eventually.  Stay tuned...
Posted by Alec Pridgen at 11:28 PM