Oh oh Godzilla- finally!  I've had to wait a while to see the latest Godzilla Film, so let me dive right in...

One day, a mysterious blast occurs in the Water.  It wrecks Bridges and Tunnels.  Cue bureaucracy!

Oh crap- it is Monster!

No, thankfully it is something much better!

What will the men in Suits do?  Will they cut through all of the red tape to actually help?

While they do that, Godzilla gets all big, angry and smashy.  Might want to hurry, guys!

Can Japan and its leadership muster up the military might to put a stop to Godzilla?

Or will the creature continue to rampage throughout the Country unchecked?

To find out, watch the Film!

Was it worth the 12 year wait?  Yes, I do realize that WE made a Godzilla Film.  It has been 12 years since Final Wars, so that's what I'm going from.  First and foremost, this is a hard Reboot.  This is the first time that Shin Godzilla appears, after living with nuclear waste for the last 60 years.  Secondly, this Godzilla does a bit of changing throughout the Film, so don't be too quick to judge the appearance of him.  The big thing is that this Film does its best to feel realistic- for better or for worse.  Since this is the first appearance of a giant creature, there is no Mechagodzilla, Jet Jaguar or any other Monster.  Basically, this is an updated Version of Godzilla: 1985, the last Film to finally get a proper DVD Release.  Just like that one, America also comes across as a bit of an asshole.  On the plus side, we don't act that way without *some* justification.  Geez, you can't nuke a Country twice without them getting all mad about it.  That aside, the Film focuses on the people behind the scenes more than most of these Films have, making Godzilla a fairly-ever-present menace that has to be dealt with.  There's some humor in the level of bureaucracy here.  Will everyone like it?  Probably not.  The last Film in the official Series had Aliens and just about every previous Monster showing up.  This one is much more akin to the original Film.  Ironically, the real Steve Martin is now old enough to play the *character* of Steve Martin from the U.S. Version of Gojira.  Make it happen!  I should note that a big part of the Film focuses on the U.S. Ambassador to Japan...who is Japanese (and has dreams of being President!).  Here's what the current Ambassador looks like... 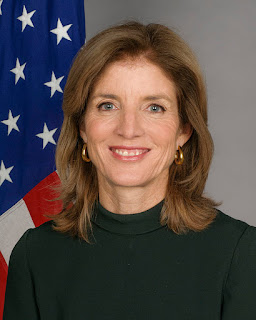 It takes a bit to get started and you have to accept the slight change of focus.  Once you get there, however, the whole thing is a blast!
Posted by Alec Pridgen at 5:11 PM