I had the damn thing on my Shelf for nearly a Week, so I might as well Review it... 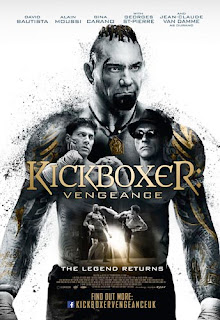 This is Tong Po.  He's a bad-ass, evil dude who fights in the 'Underground' and kills people. 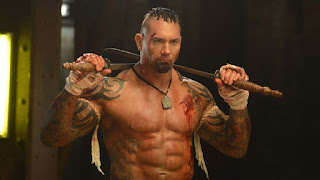 This is Kurt.  He's a would-be bad ass who travels to Thailand...only to see his brother die at Po's hands.

Tragically, the Actor who played his Brother actually did die in 2015, making this now seem kind of awkward. 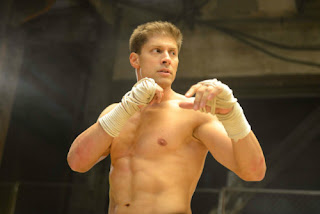 This is Durand, a Muay Thai Trainer (sure) who trained Kurt's Brother. 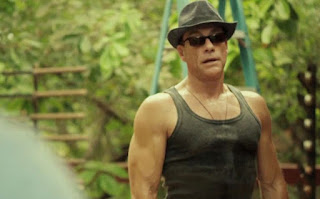 When Kurt tries to get revenge on Po, he eventually seeks training from him.

While this is all pretty interesting (even if it just strings together Fights), the similarity between our new Lead and Sasha Mitchell is hard not to notice. 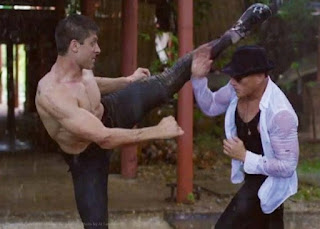 Can Kurt get tough enough to defeat Po?  Can the criminals behind the Fighting Ring be stopped?  Can George St. Pierre act?  To find out, watch the Film. 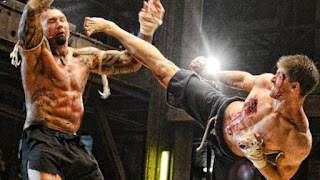 It sure ain't Shakespeare, but it works.  The Plot is mostly just a loose pretense to tie the fights together.  Our Hero has to break out of Jail- why not?  He has to win some money fighting a guy at a Bar- sure, go for it!  A random group of people try to kidnap a Cop in broad daylight- go for it!  The whole thing can be a little bit silly when you think about it, but mostly plays it straight.  The Star here is obviously Bautista, proving that he can do alot with very little.  His Po is just an evil bastard who kills people- that's it.  He has no fun quirk or anything- just evil.  Even so, his natural Charisma and presence makes it work.  That's less applicable to most of the rest of the Cast, although Moussi as 'Kurt' does show some polish.  The UFC guys here- like Pierre and Velasquez- look good in their fights, but don't show much natural Acting ability.  All in all, Vengeance has some nice style (like how they add flourish to their Subtitles), fights and little moments throughout.  If you had any doubts about whether Bautista cares about coming back to WWE, consider this- he's in a Film with the guy who beat Brock Lesnar for the UFC Title... 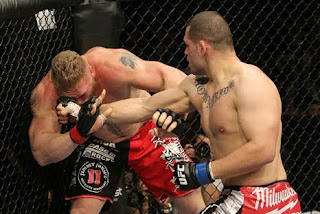 Considering it is a Reboot of Kickboxer, the Plot is pretty good.  If you are just here for the Action, you'll get plenty to like here.
Posted by Alec Pridgen at 12:00 PM

Email ThisBlogThis!Share to TwitterShare to FacebookShare to Pinterest
Labels: 2016