Syndicated action/adventure shows had their heyday quite a while, but continue to come back every so often. When one of them does well (i.e. V.I.P.), everyone thinks that the genre is back and makes 600 more! Ultimately, this genre is more defined by the losers (Beastmaster) than the winners (Hercules: The Legendary Journeys). As such, I will cover some of those, be them good, bad or simply misunderstood. Let's start out strong with...
Cleopatra 2525
The show is set in the Dystopian future where robots control the surface and humanity lives underground. I know what you're wondering and 'yes, this is ripping off The Matrix.' This came out in 2000, so it was early to the party. Our heroes are Sarge, a tough blond woman, Elle, a sassy black woman and 'Cleopatra.' Her back-story is that she went into surgery for a breast augmentation in 2001, had a weird reaction to the anesthetic and was kept frozen for 500 years. For no apparent reason, she wakes up when our two heroes shows up and goes along for the ride. Incidentally, she is in a lab with a cat man (hello, Wing Commander) and a snake person. They only show up for this brief bit, so this is sort of a Big-Lipped Alligator Moment. 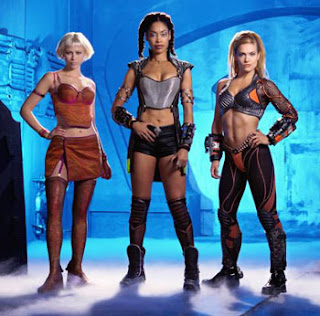 So our heroes are fighting for mankind's survival and restoration of power. This is done by jumping through tunnels, only stopping themselves with wrist-mounted web launchers a la Spider-Man. How do their shoulders stay in their sockets for this? Given the time and the budget, the blue screen effects are terrible, as are the post-production laser effects. These are in nearly every scene, so get used to them. Oh yeah, they are also led by a mysterious voice who talks through an earpiece that Elle has. Since this show was canceled, I doubt the pay-off is really there. Because of that, I will instead end with this out-of-context image of our lead heroine looking like a blow-up doll. 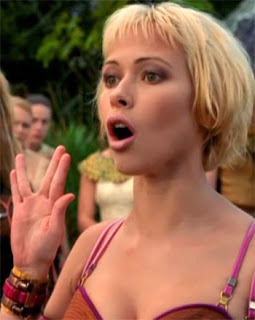 Mondo Bizarro- keeping it classy since February 2009. Up next, Bruce Campbell proves that lightning can only strike once. Stay tuned...
Posted by Alec Pridgen at 11:55 AM