Wes Craven has made a lot of movies. Many of them are well-known amongst horror fans, such as the Scream series, The Last House on the Left and The Hills Have Eyes. However, he has also been responsible for many films that did not exactly stick as well, like Deadly Blessing, The People Under The Stairs & Shocker. Today's film is one of those, although it does deserve a bit better. This film came out during the middle of his popular period- 1986- but fell the wayside amongst other films that year such as The Delta Force, Friday the 13th Part VI and Cobra. In the last couple of years, some clips of it have ended up in some 'great movie deaths' video collections, alongside the infamous 'Garbage Day' clip from Silent Night, Deadly Night 2 and Troll 2's iconic line. The film tells the tale of love, loss and robots. I could probably stop there, but the review will make things more clear. This is...
Deadly Friend
The movie begins by introducing us to our young lead and we immediately learn that we can never be him. He is a young adolescent who already has a college degree, is studying the human brain and has a scholarship. Oh yeah, he also has a robot! That is probably the most important thing to mention isn't it? His buddy is sort of a cross between the robot from Short Circuit, but built more like Wall-E. It follows basic commands, but he implies that the robot learns on its own. I think there's foreshadowing somewhere, but I can't find it. He becomes friends with another young man after the robot pushes around some bullies by grabbing one of them by the junk. See you in the third act, guys. The pair also meets a feisty young woman (Kristy Swanson) who has some secrets that she is keeping. One bonding montage later (no, really), the group is now an inseparable trio. Gee, why are they rushing all of this exposition? I wonder if something is going to happen at the halfway point that will change everything. In the background, we get hints of some abuse issues in Swanson's house. 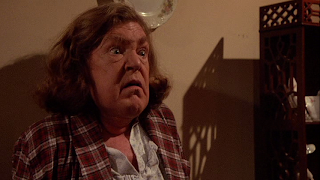 We get more build-up about our hero's improbable intelligence. He is studying the human brain and how it can be assembled and disassembled. What's that sneaking up behind me? Is it really obvious foreshadowing? Nah, it can't be. A bit after this, we get the build-up of a mean old lady with a fence around her house. After losing their ball to her, the robot tries to go get it, but meets double-barreled death at the hands of her shotgun. Ah well, the bad times are over. Come Thanksgiving, our hero, his mother and the girl have a lovely dinner together. I hope nothing bad goes wrong to ruin the mood. Oh wait, he shoves her down a flight of stairs. Our hero is, naturally, upset by this, but has a plan- put the robots brain chip into her body. Wait, that is a terrible idea and would never work. I am sure that there is no way that...he's doing it right now. Somehow, nobody reports the body missing and our hero manages to make his plan happen. His remote actually works on her too, which boggles the mind. He is not creeped out by any of his actions here either. You're a real kid? 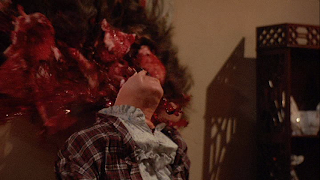 This is a Wes Craven film, so things just have to turn bad in the third act. In the most famous part of the film, she breaks into the mean woman's house and takes the ball back. Oh look, she's giving it back to the lady- how sweet. Oh wait, she's actually throwing it at her...and completely obliterating her head. I love you, physics. She also kills her dad, which prompts our hero to yell at her...and hide the body. You're sending mixed messages, pal. His friend finally 'mans up' & tells him just how crazy everything he does is. After he yells at our hero, the living dead girl-bot shows up and reveals herself. She flees the police- way to finally show up, guys- and our hero chases her. Along the way, the gang leader shows up- I told you- and beats up our hero. This does not last long, however, as the girl tosses him across the street and into a car window. She flees back to the house, but this does not last long. In dramatic slow-motion, she runs at the cops and gets shot to death. I'm sorry- why does that kill a corpse? If you want to know the twist ending, read on. If not, skip to the summary. 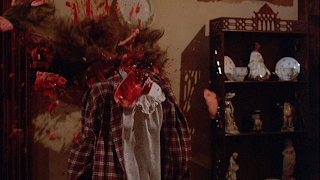 Some night later, our hero finds the girl's body and tries to restart her. However, she grabs him and her skin peels off....to reveal a robot body. Okay, I give: how does that make any damn sense?!? She talks in the robot's voice and chokes our hero as the film fades to black. 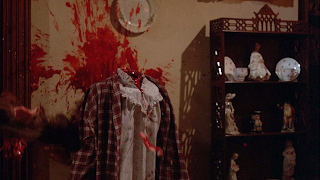 This movie is good, but definitely hinges on your suspension of disbelief. How is that kid so smart? He's like super Doogie Howser! Incidentally, the movie predates the show by three years. The horror elements of the movie come late in the film, but are built up pretty well as a whole. As I joked about in the review itself though, the foreshadowing is really, really forced. Honestly, the acting is good and covers up some of the flaws. Mind you, the blue eye shadow used to make Swanson look like a corpse is still very, very laughable. Plus, that ending...is something. Do yourself a favor and check out this film if you are open-minded. If you are very strict about logic in your films, go elsewhere. 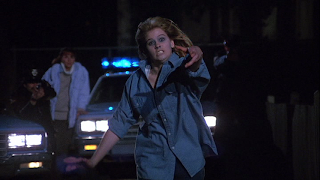 Up next, I present you with the conclusion to the 'Kelton Trilogy.' If you actually know what I'm talking about, I would be surprised. Stay tuned...
Posted by Alec Pridgen at 4:58 PM