More scarecrow films are out there, people! Believe it or not, this strange sub-genre continues to thrive. Yeah, I don't get it either. In spite of my feelings, there is another series of these movies to cover- the Scarecrow series. I know, creativity abounds, right? There are three of these movies including Scarecrow (yawn), Scarecrow Slayer (Metal meets straw?) and today's film. Yes, I chose to do the third film last, because, well, it sounded funnier. It has a revenge plot, scarecrow possession and former wrestler/UFC fighter Ken Shamrock trying to act. Curious now? Read on to my review of... 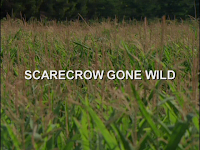 The film begins with a long scene of a woman running in a field from a scarecrow killer. Any more setup than that? Nope. We also don't have to wait long for Ed Wood-style gaffes as the woman starts to climb up a hay pile in mid-morning, only to jump from a shot of her doing it near sunset. Either she is slow or this movie sucks- guess which one I believe! After all the running, the monster cuts her throat and we reveal...that it was all a story by some jocks who have 'fresh meat' for initiation. This scene gets a bit homoerotic as the new guys are in their underwear and in the shower room surrounded by other guys. Thankfully, Ken Shamrock and his wooden acting break up this scene and he threatens the team leaders about not going through an initiation. One of them promises that they won't, but the others are not exactly on-board with this. The good one makes/entices his friend to come along with the promise of a girl, whom he promptly goes off with. By the nice one, I mean it in a relative way. By the way, watch for the girl's extremely-visible mic attachment in one scene. 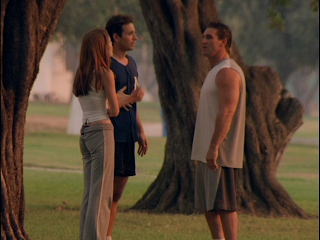 We are spared much of the initiation (thank God), but cut to when the guy our hero made come along spazzes out and attacks the guys- not that he is lacking for a reason. They tie him to the same cross from the story and leave. We cut to our hero and the girl having sex, although you only see enough to know that you are going to see nothing. Did that make sense at all? The jocks head to the beach and send the 'fresh meat' to go get him. While they head there, he seemingly dies and gets possessed by the scarecrow that he was tied to (it was on the cross as well). They get there, but get picked off one-by-one by the monster. Yeah, kill them for...being tortured as much as you and trying to help you later. The morals here are as ambiguous as Creepshow 3! The guys make a call to our hero before they die, which sends him and the lady out to get him. The movie cuts drastically from real light (read: almost none) to a dramatic spotlight. In the wake of film's like Feast III, I appreciate being able to see things, but not when it is so badly-done. Our hero explains that the guy is a diabetic and has gone into shock. They take him to a hospital run by the girl's dad, which is apparently under dramatic construction. More killings please. 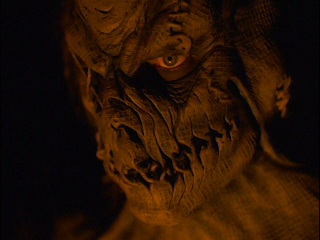 The movie makes us wait for our killings, but, when they come, they come in quick succession. First, we get lots of character work with our jocks and their ladies. One of them got drunk one night with one of the girls while his girlfriend was away. This leads to a lot of *sigh* teen angst...even though our cast is in their 20s. Oh and one of them appears topless a couple of times for no reason (I did not vid-cap that, sorry). As more time-filler, we get a sub-plot with one of the guys being a songwriter, one with people talking about how they can't tell the girl about the affair and a volleyball game montage. Our heroes show up and berate the jocks, but lose all indignity when it's revealed that they hid the guy's Diabetes from everyone. Everyone starts to get along until the affair is revealed and the couples goes off to fight/talk. Both of them are killed by the scarecrow (one off-screen- dammit) and the girl who is guilty goes down a short while later (mostly off-screen). The guys get all happy and watch one of them sing his song. As soon as he finishes, the Scarecrow gives his review via a pole (the one for the volleyball net) tossed through the man's chest! The lone black guy dies after being vaguely choked as everyone else runs off. 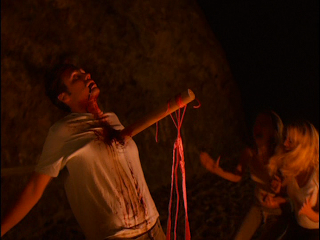 They run into the coach (I have skipped his non-interesting scenes in the summary) who explains that the Scarecrow curse actually started with him and his friends at the school years ago. Nobody can escape it, he explains, which is why it ignored him for 20 years! He shows off his MMA-style briefly before being choked out with a sleeper hold- really! They search for his car and flag down a passing truck, only for it to actually be driven by the Scarecrow! He runs down the other girl and we get our second 'dramatic spotlight in the dark' scene. At the hospital, they try to save their friend from his coma, thinking that it will end the curse. After some so-so action, they shock the monster with a defibrillator, which actually means that they are zapping their friend. He wakes up and the monster dies. Oh wait, they need to do it again. Stupid movie tease! We get our oddly-happy ending as the Coach did not actually die, merely got knocked out. Stupid monster or stupid writing- you decide! The End... 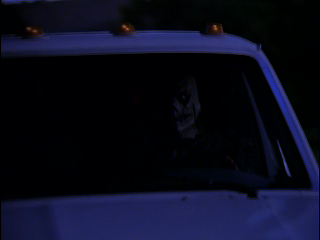 What do you mean 'there's more?!?' They keep going until they reveal that the Scarecrow spirit is still in the young man. They do this by showing him looking at his reflection in the mirror and seeing the beast. He kills the dumb jock (on-screen) and the Coach (off-screen). Our heroes figure this out when they see him in the mirror and see the monster reflection. That's not how it should work! He chases our heroes to a Chapel (must be a Christian college) where he battles with our male lead. This would be an easy fight if it were not for our villain developing- I kid you not- electrical powers. Apparently, defibrillators do that to everyone! He reverses the curse, sees that he has the monster reflection and impales his heart on a nearby cross. Hurray- the movie is over. Right? The End. 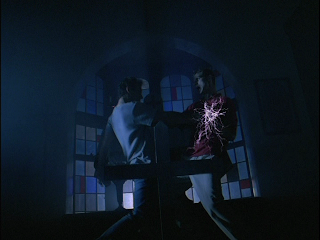 This movie is bad for so many reasons. The writing is stupid, the direction is tepid and it is just uninspired. They just combined the ghost killer with the scarecrow movie and a possession story. That's not even talking about the weirdly tacked-on ending. The result of this is a really weird Chapter selection. The movie is put into 8 Chapters, one of which is the closing credits! Chapter 7 is nearly half an hour, so as not to reveal the third act surprise! This is not still not mentioning things that I left out. For example, Gone Wild has three topless scenes. The first two involve the dad's new girlfriend and the latter was already addressed. First, she walks in on the phone call to made before the trip with no top on. When he gets called that night, she is topless in bed with him. This served what purpose again?!? The most fun you will have is with the stupid effects (especially the lightning one above) and the ironic things about when it was made (2004). Have you ever seen Ken Shamrock and a blue iMac in one room? You have now. 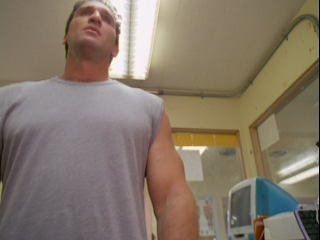 Next up, another H.G. Lewis classic involving murder, strippers and some odd fourth-wall breaking. Stay tuned...
Posted by Alec Pridgen at 9:06 AM

Email ThisBlogThis!Share to TwitterShare to FacebookShare to Pinterest
Labels: scarecrows