You're probably wondering why I picked this movie? After seeing it, I'm a little curious about that myself. Here's the thing: Pumpkinhead is not that bad of a movie as a whole. The three direct-to-video sequels, however, have a less good reputation. I simply took a look at all three of them and asked myself 'which one looks stranger?' This one happened to win the lucky lottery with me, although I was not as lucky...more on that later. The film takes the basic idea of 'there is a Pumpkinhead monster' and does whatever the hell it feels like. That's as silly as the idea that you can turn Michael Meyers from a serial killer into a weird Celtic murder machine! Can you imagine the...oh, right. Before I make any more ironic realizations about horror franchise decline, how about I jump right into...
Pumpkinhead: Ashes to Ashes
The film begins with a guy running through the woods, with Pumpkinhead hot in pursuit. Wow, you don't waste any time, movie! This turns out to be a man's nightmare. On the plus side, they got the bullshit scene out of the way, as opposed to mid-way through the movie. We learn that some people in this tiny ghost town of a setting are up to no good. A man goes out hiking and stumbles across the man from earlier dumping a body in the swamp. By that, I mean that he barely submerges the thing. You must be new to this! The man runs off for help, but ends up running right to where the rest of the other man's friends are. Worst...luck...ever! We see a small group of people cutting up a body, although only one of them looks like they belong. Oddly, the scene resembles some sort of freaky field trip. Our mysterious stranger makes a noise and gets chased. Using his ingenuity, he randomly tosses and turns over every object in his path. This actually works, but, instead of fleeing into the woods, he decides to hide out in the barn that is about six feet away from the door. His super smart plan fails as their dog manages to find him amongst the rotting corpses...in spite of the horrendous smell's ability to overload it's nose. They cut out a kidney and dump him in a hotel room. No, really. He stumbles upon a helpful resident, but dies. So, where is this going, movie? 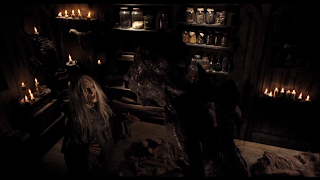 The next day, everyone in town discovers the house of murder and dismemberment. Damn you, Doctor Satan! The evil old man from before shows up and...he is the town's coroner. He 'looks' into the matter, although a search of the swamp for bodies does occur as well. When the town discovers most of their relatives- and a small child- amongst the wet bodies, some of them decide to take matter into their own hands. They consult a local witch who takes the body of Lance Henriksen's character from the original and turns him into the new Pumpkinhead. This process creates a tie between the monster and our heroes, which will be a big factor later. What matters now is that Pumpkinhead is alive and off to kill some people. This brings us to the movie's biggest problem: CGI. As cool as the Pumpkinhead monster looks as a suit, it looks like crap as a CG creation. The movement animation is about as good as it was in Daredevil, only that one was disguised with dark shots. I should mention that this movie was made in 2006, just to diffuse any comments that may cover for this fault. If you are going to use it, spend the damn money! We get some good kills, including a man being stabbed through the heart with the beast's tail as he tries to open a window. That helps, but only a little. 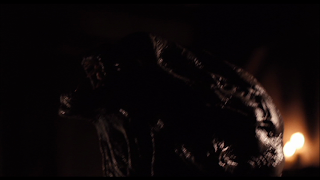 Since the movie only gave us about five villains, the kills gets spaced out a bit, leaving us with the actual plot- dammit! Eventually, our villainous doctor/organ harvester figures out that there is a connection between the people who want revenge and the arrival of the monster. Him and his companions decide to after the people involved and stop the power at its source. Where have I heard this idea before? Oh right, it's from The Crow! This leads us to a really weird story arc where the villains track down our heroes, while the monster tracks down the villains at the same time! This does not lead to much, other than having one monster attack stopped by one of the men being killed. As if this can't get more convoluted for a simple revenge story, the monster climbs the church building (cue more crappy CG imagery) and attacks everyone. Um, what happened to the revenge aspect? I don't care by this point, but I can tell you that it ends with the remaining killers trying to snuff our heroes, only to meet a grisly fate themselves. The End. 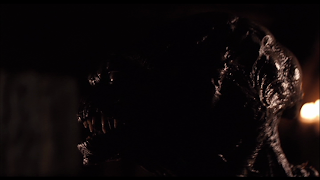 This could have been passable, but insisted upon confusing its own damn narrative. There are some killers, some nice people in the town (sort of) and a monster. But, the nice people summoned the monster, which acts as evil as the killers...sometimes. In fairness, the monster kills people who did bad things...until it attacks the people in the church. Some of our heroes feel bad about summoning the monster, but don't really stop it. In addition, the bad guys attack them for summoning the monster and it is the only thing that saves (some of) them. Listen guys, this is not a deep story- it's a confusing one. If you could have made a simple monster tale without CG imagery, I might have passed this movie. As it is, Pumpkinhead 3 is simply an ugly mess. Random, pointless cameo by Lance Henriksen or not, this movie sucks.
As a side note, Noah over at The Spoony Experiment (page listed under Web Humor) reviewed the first two movies AND the crappy PC game based on the latter one. I feel his pain.
To celebrate Halloween, I cover the movie that I am legally-required to review. Stay tuned...
Posted by Alec Pridgen at 9:04 AM