I'm afraid of some ghosts.  Yeah, SPOILER Alert- this film is about Ghosts.  That make sense to you?  That movie about a guy killing people and torturing them while driving in a Truck is...a Ghost.  That family in the RV- Ghosts too.  This is pretty damn insulting, especially when you consider that this is apparently the premise of the whole series.  That's right- they 'planned' this all along.  It just makes about 500 plot holes in the process, but I guess they didn't care.  The sequel takes place 1 year later and involves the brother of the film's original lead.  You know, the guy that was mostly tortured the whole time before he died.  Couldn't have made it the heroine's brother or something?  As a bonus, the lead brings along some random guy and a whore- why not?  To find out just why I hate this movie so much (besides what I already said), read on... 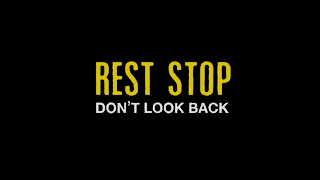 The opening scene takes place in the '70s.  The crazy family grab a guy, kill him...but he comes back as a Ghost and kills them, thus making them Ghosts the whole time in the first film.  Yea. 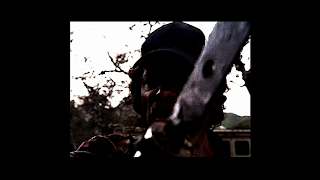 In the Present Day (thanks, Title Card), the brother of what's-his-name is back from Iraq.  He hooks up with Some Whore- I defy you to critique my character definition)- and decides to go looking for him.  Sure- most people that disappear for a year turn up alive...idiot. 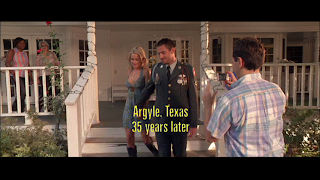 Hey look, Charles Manson is running a Gas Station.  This character confuses me, as I'm not sure how he can be working with the Ghosts (SPOILER) or why exactly he would do so?  Do they just agree to not kill him in a silly way?  No answers here. 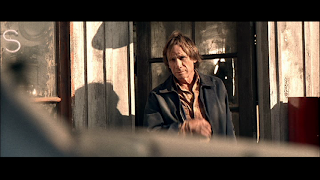 Speaking of stuff not adequately-explained, Nerd Hanger On meets up with the Heroine (although not the same Actress- oops) and they have sex.  When he wakes up, she vanishes...since I guess she was a Ghost.  No, really.

I can explain why seeing Ghosts, but how do you explain f#%*ing one?!? 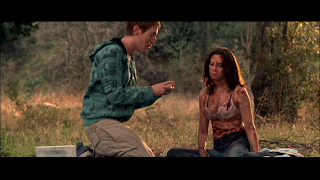 The damn family- including the Twins- show up a couple of times here.  When can I be rid of your creepy, matching faces?  I guess after this next section, really. 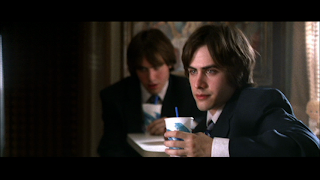 Seriously, why does the Gas Station Owner work with the Ghost?  What does he gain?

Oh yeah, they also establish that The Driver doesn't/can't talk...while he can drive a car, bite people's fingers off, use a video camera and tie a knot.  Of course- why would anyone question that?!? 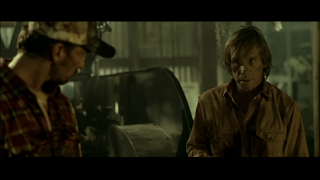 Further muddying things, Gas Station Owner tells them how to kill The Driver- it's stupid, so I won't say it- & they do it.  Another explosion- check.

However, it doesn't work- they never say why- and the RV with the family in it kills Hanger On Guy.  So is the RV real, but being driven by Ghosts?  If it is, I have questions.  If it's not, I have even more! 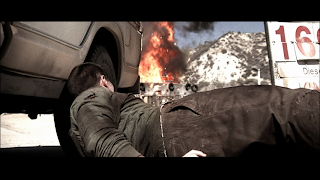 Despite no evidence suggesting this, we learn in the dark ending that Some Whore is dead and now in the clutches of The Driver.  Twist.  Endings.  Must.  Make.  Sense!!!!  The End. 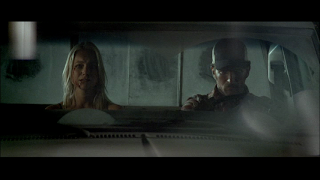 Why did I even bother?  The good part- they explain everything (sort of).  The bad part- they explain everything in the most asinine way humanly-possible.  Well, I guess they could have just said 'It's all a dream.'  Seriously, Ghosts?  You couldn't have made him just super-evil, some sort of demonic creation or, God forbid, not something this stupid.  Does he really drive the car?  If so, how?  Name one film in which a Ghost drives a car- I dare you.  No, the Amityville House moving the Diaper Truck in Amityville 1992 doesn't count (as it just unlocked the brakes)!  I should mention that the original Director is merely on-board as a Producer which translates to 'The Studio wants to make another one and we'll pay you to act like you like it.'  It's possible that he was really deeply-involved in the Production, but it's just one of those signs that says 'Beware- shit sequel!'  Speaking of shit, where was the surprise in any of the surprises?  For example, our Hero finds his Brother alive and rescues him...only to learn that he was really a Ghost.  Yeah, we saw him die in the last movie!  It would be like if Psycho 2 built up to revealing that the Mother was actually dead...again.  The surprise appearance- and sex scene...ew- involving the Heroine from the first film falls in the same line.  The Ending implied that she was dead and merely haunting the Rest Stop.  Big shock- that's still the case!  Speaking of which, she was killed elsewhere, so why haunt the Rest Stop?  Hell, the idea that the evil RV Family help The Driver is silly, since he killed them!  'Sorry that I killed you- want to help commit a serious of implausible murders that insult the audience?'  'Oh, you scamp!'  The bottom line: adding Ghosts to a series is stupid, especially when your film is already stupid.  Isn't that right, Muppet Face? 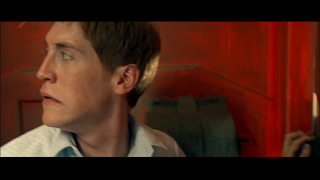 Next up, Dario Argento returns to Mondo Bizarro with a more-recent effort.  Can you combine murder with video Poker & still have a good film?  Stay tuned...
Posted by Alec Pridgen at 11:57 PM