You know, I used to having nothing against the good people of Finland. That all changed when I saw this movie and now I realize just how much they suck. I should probably explain, shouldn't I? This is actually the sixth in the Star Wreck series, although it is the first one to be given a DVD release here. Gee, I wonder what would inspire a DVD release now? Hmm...I wonder. Another point of note is that this film actually was made in 2005, while the previous one was made in 1997. According to reports, it took them that long to get it made. Man, I haven't seen that much time wasted on a film since the seven years it took to make Eraserhead. Unfortunately, this movie has far more bad puns and bad blue (yes, they use that instead of green) screen effects. This is the foreign horror that is... 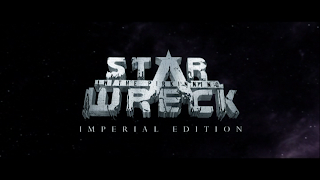 The film begins with Captain James B. Pirk (seriously) stuck on Earth. He explains in a monologue that they want back in time to save the world, but got stuck in that timeline. By the way, that is the most back-story you get in the whole movie, so, enjoy. After a beating by some in-town thugs, he meets up with his two commanders- the 'robot' Info (seriously) and the alien Dworf (not kidding). They decide to just screw with the time-space continuum and remake their future society now. So much for the Prime Directive, huh? Their first stop: Russia. Their takeover of a nuclear power plant goes surprisingly easy as the men there are eager to be taken over by a new leader. Great Moments in Race Relations, anyone? One semi-montage later, the men have impressed the Russian President by beaming into his office. It sure is a good thing that all of their advanced technology is not based on components that don't exist, huh? 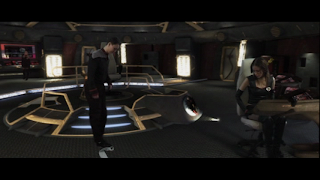 Faster than you can say 'rushing the story,' our 'heroes' have formed an army of super-armed men and spaceships. Through a semi-clever bunch of newsreel-style storytelling, they have taken over the world and formed a space station. Never does anyone involved go 'hey, how come we are the evil dictators?' They travel around the galaxy in some surprisingly-good CG ships. How about you guys just focus on them and ignore all of this 'comedy?' Instead, we get scenes with Pirk hitting on the film's lone woman of interest and getting a video call while in the bathroom. That was a funny idea...in Spaceballs! In addition, the comedic character from the Russian scene becomes a second-tier one. Yeah, good call! He stumbles upon another ship in deep space and blows it up. This leads Pirk to decide to explore new dimensions. Why? Because Earth is full of protesters and he wants to dump them somewhere else. 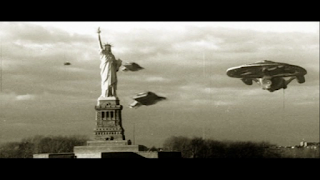 On the other side of the maggot hole (get it?!?), Pirk and company run into the space station from Babylon 5...er, I mean, a completely new idea. The place is run by an idiotic guy whose only joke is doing really long speeches that nobody likes. Our 'heroes' attack the station and nearly take over, only getting a break when they offer to let Pirk have sex with a woman crew member. He falls for the obvious trap and gets caught, just as reinforcements arrive. This part would almost be passable if it only focused on the ship battles, but we are constantly 'blessed' with cutaways to Pirk and the dumb 'Russian.' Another space battle or three break out, which brings me to the dumbest jokes of the movie...that are also the most common. The 'phasers 'are called 'twinklers'...for some reason and the 'photon torpedos' are called 'light balls.' Blah, blah, blah...the ships all blow up and Pirk's ship crashes on Earth. They end up in Hawaii, but in the Ice Age. Info agrees to run in low-power mode and fix the problem in 11,000 years. See you in five years for Star Wreck 7...if I get a lobotomy by then. The End. 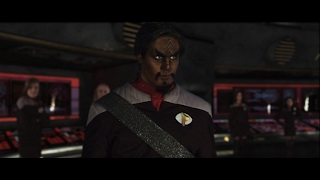 Oh dear God, was this movie bad! It made me yearn for the subtle, low-budget nature of Red Dwarf. Hell, it made me yearn for the 'high-end' effects in Cleopatra 2525! Maybe it is just that the stupid jokes did not translate properly out of Finnish. On second thought, why should I drag an entire language down with this crap? It has brief touches of cleverness, but buries them in so much mugging and over-acting! The movie's CG work was almost worth the long delay, but you could not say that about the writing! You had over five years and all you could come up with was a cross between the 'Mirror, Mirror' story and Babylon 5? Let's not even get into the random characters who are apparently supposed to be important, but the movie never addresses why. On second thought, let's do just that! Who is the lady on the ship? She's not from the future, but she just goes along with this whole thing? Who is the new villain who shows up with a super ship that is 'twinkler-proof?' This is not a kung-fu film, so you can't do that! This movie is all about doing things you should not do if you want to be entertaining. I'd tell you to not make a new film..but that's not going to help.  I think this expression encompasses just how I feel... 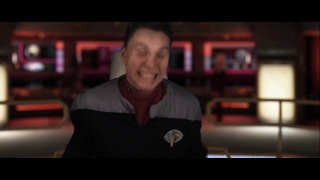 Next up, a classic Ed Wood film gets the Mondo Bizarro treatment. Who loves strippers? Who loves Criswell? Whoever does both is in luck! Stay tuned...
Posted by Alec Pridgen at 6:34 PM