Sherlock Holmes is an iconic character and has been represented in more films than nearly any other character. He has been played by numerous actors of note, including Christopher Lee, Peter Cushing and Basil Rathbone. Occasionally, however, someone thinks outside of the box and puts him in...the future! There are actually two different incidents of this, so let's start with the earliest... 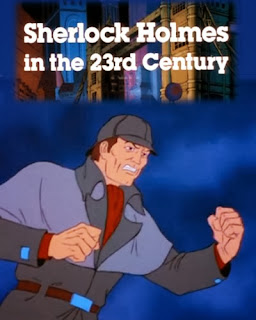 This is a bit confusing to explain, so try to stay with me. Bravestarr is a Filmation (He-Man, etc) show about a space cowboy trying to restore order to the planet of New Texas. It's a silly premise, but it worked. How does Sherlock Holmes fit into this, you ask? The answer is...odd.

In the show's 65 episode run, only two episodes take place outside of New Texas- these ones. This 2-part has Marshall Bravestarr traveling to New London as an envoy or something. By the way, if you like the rest of Bravestarr's cast, screw you- they're not here. Instead, we are introduced to a new character and a new villain that only appears here. Hurray! 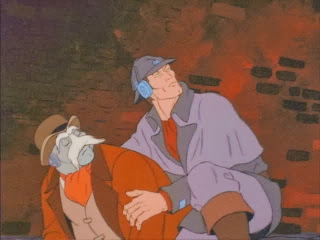 The story centers around the famous Sherlock Holmes tale in which he apparently dies from falling off of a cliff during a battle with Moriarty. In the original tale, it was a trick to lure the villain out and get an advantage. Here, Holmes falls into a time portal that takes place during the storm...for some reason. He ends up in the future and has electric powers due to his trip, as well. What follows is a silly tale of future Moriarty in some sort of weird scheme to control children with music. It does not really make a lot of sense, but this is a children's show from the 1980s. 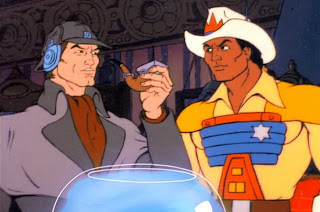 I should note that the ending leaves Holmes in the future- causality be damned! This is obviously the set-up for a spin-off. If you don't recall ever seeing this show, it is because Filmation went out of business. Their last gasp was a film that tried to be the sequel to Snow White. Au revoir, Filmation. 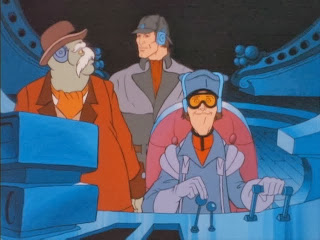 To see a bit of what this show was supposed to be like, check out the Part 2. It only took 10 years to come to fruition. Stay tuned...
Posted by Alec Pridgen at 10:32 AM