Zombies were very popular in the 1980s, so the fact that one iconic zombie film managed to get made is no surprise. The original Return of the Living Dead is a fun, quirky film about gore and mutilation. More importantly, it dared to defy the zombie rules set up by Romero. Shooting a zombie in the head- that doesn't do crap! You have to burn those guys up or cut them into little, tiny pieces like in Stacy. With the popularity of the film, how do they follow it up? Do you just rehash the same ideas or try something completely new and unique? To find out, check out my review of...

Return of the Living Dead: Part II
The film begins by explaining the basic back-story of the series. Night of the Living Dead was based on real events and the gas that caused it is still around. Apparently, they dumped them in the same canisters as the aliens from the War of the Worlds television show. Our plot in the present involves two of the preserved zombie bodies being left in the sewer. Unfortunately, my dream of them infecting a giant alligator and giving us Alligator III: The Real Mutation does not come to be. Instead, some dumb kids open up the electronic locks placed on them by the government and unleash the gas. It looks like a mix of The Fog and the stuff that created the Teenage Mutant Ninja Turtles. After a bit too much filler and character introduction, the dead rise from the ground! By the way, if you ever wanted to see a film spoof this iconic scene with slapstick comedy, this is your film! A zombie putting on their glasses- check. A zombie who keeps getting his hand stepped on as he exits the grave- check. A zombie just flat-out falling back into his tomb like Tor Johnson- why not?!? Incidentally, two of our heroes are grave-robbers. I just wanted to mention that. 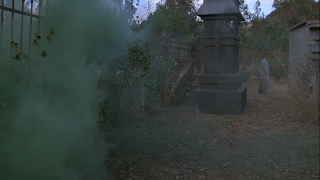 Our heroes are a rag-tag group if there ever was one. We get the aforementioned grave-robbers (one old and one young), a dorky TV repairman (also our lead), a weird redhead, a senile doctor, a teenage girl and her brother. There are many other characters, but they are pretty much just there to be zombie fodder. Take, for example, the two other kids that go with our young hero. Both of them die and turn into zombies, the latter of which gets a role in the ending. Another character that gets a big role is a disembodied zombie head. Yeah, I said that. His role involves being stabbed in the head by a screwdriver, complaining about this treatment and somehow ending up at the site of the film's conclusion. How did he get there? Did he share a ride with the guy from Basket Case? After a lot of running around and yelling, our heroes flee in the doctor's car. They head to a hospital, since the two grave robbers (not from outer space) are feeling ill, since they were around the gas. Somehow I don't think that a hospital is the best place to go, guys. Then again, these are the same people who unwittingly call zombie hordes over to them two different times! 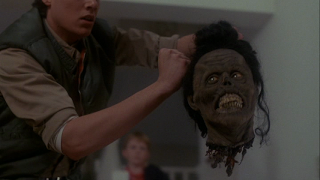 The movie dares to show you the anguish of turning from a human into a zombie. Oh wait, it just has one guy moan and complain for several minutes. The young man is more nuanced and attempts to give a rational explanation for why he needs to eat his girlfriend's brain. It is, well, odd and sort of funny. We also get numerous gore shots that are really silly. Take, for example, the man who is punched in the face by the redhead and it sinks in like someone punching a pumpkin. Another zombie gets his mouth around the same girl's hand, only for her to pull it off. The brief bit where he pulls his hand up to check on the result is priceless. After inadvertently kicking lots of zombie ass, the redhead decides to let her boyfriend eat her brains...and she dies. Thanks for coming, honey. Ultimately, our surviving heroes get trapped at the power plant and must rely on the kid to save the day. He turns on the power and zaps all of the zombies. The military show up and burn them, despite the pleas of the head. Seriously, how did it get there? The End. 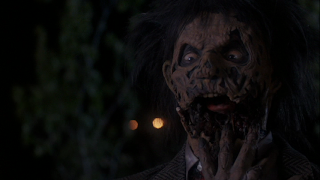 This movie is not bad, but it is definitely not for everyone. It is bizarre, quirky and strange. It goes for horror at times, but mostly goes for curious laughs. They are usually not 'punch-line jokes' either- just weird moments that go unexplained. The closest they come to a normal joke is the bit where the one guy talks about having deja vu, since him and two of the others were in the original! The zombie effects are quite good, especially if you enjoy '80s prosthetic work. Personally, I would take that over crappy CGI any day of the week, so it pleased me. They absolutely revel in the ridiculous gore, from decapitations to body-splitting. The problem with the film is that it is hard to nail down. The glimpses of horror are immediately followed by physical comedy, which will just make people confused. The movie is not meant to be taken seriously, so just embrace it. 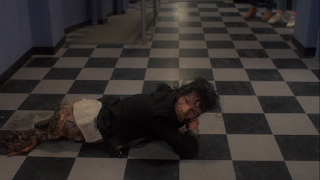 Next up, the sequel to a surprise hit about a woman and a plane. Unfortunately, it is not Airplane II. Stay tuned...
Posted by Alec Pridgen at 9:47 AM