I almost feel bad writing about this movie. I mean, this movie represents the penultimate low in Ed Wood's life and career. In case you are wondering, the lowest point is actually appearing in porn. No, I'm not watching any of those movies! Let me put this film in the proper perspective for you. The movie's most recent- possibly only- DVD release comes as a two-pack with a film called The Mighty Gorga. This is an awful, low-budget rip-off of King Kong. In spite of that, I would rather watch that film than AC/DC, even if I was having my teeth pulled during the process! Even so, I have to close up the series of Ed Wood reviews somehow. This is going to be the Trancers V of the bunch, so check out my review of...

One-Million AC/DC
I almost feel ashamed describing the 'plot' of this movie. Claiming that this movie has anything close to a plot is an embarrassment to anyone who has ever written anything. In spite of that, I will go on. Basically, a bunch of cavemen live in the jungle and hump each other. On the plus side, it does not have a scene of horses humping each other like The Beast in Space. Of course, the people pretending to have sex on screen are not much better. The men look permanently-stoned or just out of it. The women are all anorexic and listless. As I stated in my original review of the movie, all eroticism goes out the window when you can 'count the women's protruding rib bones from space!' There is really not much more to the film than that, really. It's not like there is a terrible comedy hidden in this movie's dark, disgusting crevices. Wait, why is there a paragraph break here if I'm right?
*
I lied a bit when I said there was not any more to this movie. The film's other plot involves a dinosaur that is wandering around the area near them. The Elders take time away from humping women (not much, mind you) to select some champions to kill the beast. They send him away with a brief bit of poetry that is utterly awful and actually causes pain to listen to. Thankfully, Something Weird decided to put this as a stinger on every menu for the film. Screw you hard, guys! By means of some of the worst special effects of all time, they manage to defeat the beast, but not without some casualties. Oh and somewhere a horny ape gets involved. You know what, rather than write any more about this film, enjoy a collection of screen captures from it. At least you'll laugh at them. 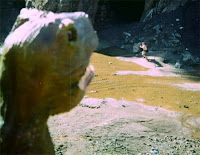 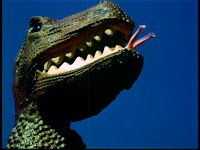