Syndicated Incorporated: Jack of All Trades

Sam Raimi and Bruce Campbell have always been an eccentric duo that achieved great success. In fact, many times when the chance for a pairing has fallen through, the product was not as successful- i.e. Darkman. So, in the year 2000, after the success of Hercules and Xena, the pair made a new show... 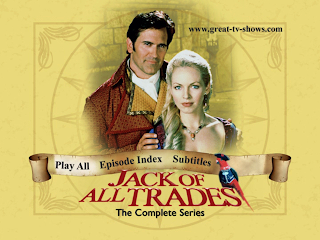 This tongue-in-cheek show starred Bruce as an American spy who was sent to a tiny island that was ruled by the French. His job: to put a stop to Napoleon's occupation and end his global land grab. Teaming with a hot British lady, he takes on the mantle of The Dragoon, a Scarlet Pimpernel-like character. Okay, it is the Scarlet Pimpernel, albeit with Bruce's witticisms. In spite of being the only man with both an American accent and that damn chin, nobody figures out his dual identity.

The key to the show is its oddball nature. For example, the pair of heroes get information from a talking parrot with a French accent. One story involved Blackbeard (!) kidnapping Ben Franklin in order to have him make a super-weapon based on the kite. The coup de grace though is the casting of Verne Troyer as Napoleon.

Unfortunately, I used the word 'success' so many times in my header as ironic juxtaposition as this show failed to grasp an audience and got only one season. It did get a DVD release, which is more than I can say for Manimal.

Next up, an iconic barbarian as filtered through a low-budget action show in syndication. Will this be gory or god-awful? Stay tuned...
Posted by Alec Pridgen at 9:34 AM