If there ever was an example of how crippling the use of stock footage can be, it is this movie.

The majority of the film involves our lead actor recounting previous events to a group of people in a room. To make it sillier, a good majority of them were actually there!

So, why so much stock footage? 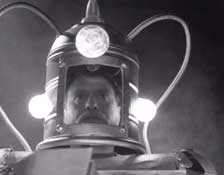 Because this is the FOURTH film in the series and they felt the need to pad the film out! That's right- most of the film is designed to tell you what happened in the other three films. Even the Mystery Science Theater 3000 treatment can't make this film enjoyable.

On the plus side, I don't need to see the other films in the series now!

Next up, a tribute to a man who made a career out of stock footage. No, it's not Ed Wood. Stay tuned...
Posted by Alec Pridgen at 6:32 PM