Conan has been done in several forms, be it books, movies, cartoons and even an MMORPG. Hell, the guy has been done in so many medias that he has been done by Ron Perlman, which is sort of like a rite of passage for many characters. In this case, however, I am talking about the live-action series done about him in 1997. 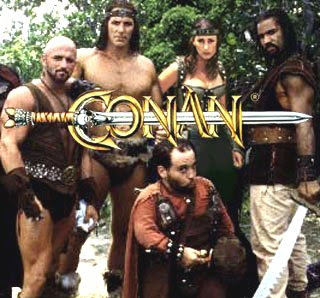 The show has a pretty basic premise and stays close to the books/movies' themes. Conan is a man who wants to be king, battles an evil wizard (a different one though) and has to regain his kingdom. There are some differences though.

For example, Conan is not a complete dick. However, his niceties are thrown off by his near-incomprehensible accent! He has a group of warriors that fight with him, although none of them are from the books. Also, as you can see, he has a midget with him.

The show never strayed far from the norm and did not do much to distinguish itself from its obvious inspirations: Hercules- The Legendary Journeys and Xena- Warrior Princess. In fact, it only ran one season (or 22 episodes), which was the same fate as Young Hercules (a future entry)- although that show made 51 of them.

If you like fantasy stories and syndicated-style action, it's worth a look. It's not the best show that you will see, but it gets the job done. Besides, it has Michael Berryman dressed as a wizard in its finale. What more can you ask for?

Up next, William Shatner turns his books into action-show fare. How does that turn out? Stay tuned...
Posted by Alec Pridgen at 7:48 AM