VHS For The Win: The Clown Murders

A movie about people killing clowns and/or people dressed as clowns is a simple enough proposition.  Can this film work with that idea? 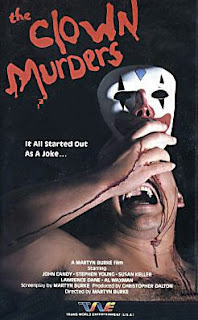 Wow, that looks suspenseful.  I almost believe that something of note happens in the film!  Of course, I know that it doesn't.

Kudos to the makers of the VHS box to not give John Candy above-the-title billing like on the DVD.  He wasn't dead then, of course.

Next up, a movie about a man with an odd murder victim.  Can you believe that someone can kill something that weighs several tons?!?  Stay tuned...
Posted by Alec Pridgen at 9:37 AM

Email ThisBlogThis!Share to TwitterShare to FacebookShare to Pinterest
Labels: killer clowns, vhs for the win