Angel continues to have really, really bad luck.  I guess it's karma, really.  This girl becomes a prostitute at age 12 to pay for school, since the Foster Care system is so bad.  Clearly, it's worse than selling your body for money to strangers!  She does this until her secret comes out...but that gets swept away and she goes to Law School.  From Pre-Teen prostitute to Law Student- something has to go wrong.  As it turns out, she is just using up all the good luck, leading to bad luck for pretty much everyone else in her life.  In Avenging Angel, a new actress plays the role, since the movie is set four years later, but made one year later.  Mind you, the actress who played 15 year-old Angel in the original film was actually 24, but whatever!  She's not the only actor to not come back for their role, but more on that later.  To find out just what Angel is avenging, read on... 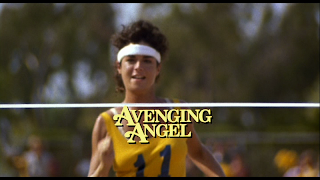 Angel meets up with her buddy, the Police Inspector...except he's not the same actor.  Why did the guy from Angel not return?  Well, I can wager a guess later... 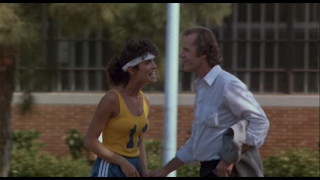 The first major, superfluous nude scene of the film comes within the first ten minutes.  A woman takes a shower and gets dressed, preparing to meet a 'John.'  As it turns out, however, she's an undercover cop and... 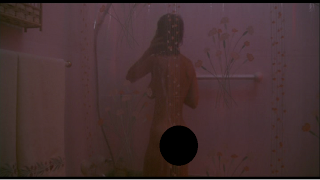 ...the sting operation turns sour.  A group of men kill the 'John,' kill her and leave the Inspector lying on the ground bleeding.  Now you see why I imagine that the actor didn't come back, huh? 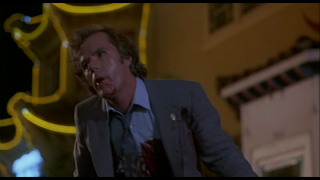 Angel comes back to town to avenge him- clever title, huh?- and joins up with the landlord from before and her Cowboy friend.  Even Yo-Yo is back as a main character.  You know, that guy who had two scenes and gave me a stinger for the last review?  He's back too- yea? 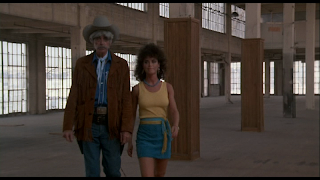 Back on the streets as Angel, our heroine discovers a scheme to buy up all of the lots and remake the Hollywood Strip.  This wouldn't be illegal if it wasn't for all the murder, really? 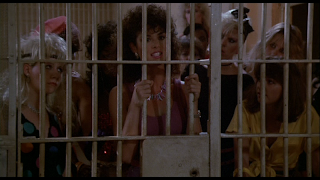 Ossie Davis is here for two scenes, playing a never-before-seen or mentioned Captain.  His role- act concerned and save our heroine in one scene.  Loved you in Bubba Ho-Tep, dude! 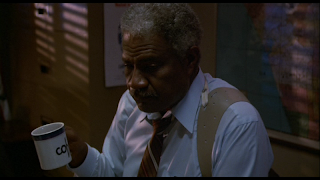 Robert Tessier- B-Movie Actor and live-action Mr. Clean- has a cameo as a Tattoo Artist.  That's suitably-random, thank you. 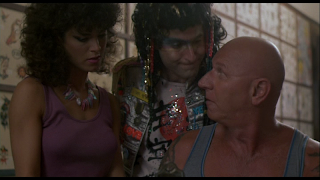 Will the villain succeed?  Will the day be saved?  Given this random cast of characters, it's hard to bet against them.  The End. 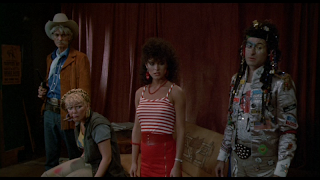 You're my angel!  The plot of this movie is not bad, but not great.  It's kind of forced to fit into the series.  The transition is jarring from Angel to Avenging Angel for many reasons.  The actor changes, for one, make you feel like you're starting over, not continuing the story.  Second, the tonal changes here are pretty damn weird. The film begins happily, turns to murder and then turns to comedy as our heroes bust the Cowboy out of an Asylum.  Fun fact- the movie thinks that Law Students can file legal briefs in the state of California.  The movie is just full of random tonal changes, including a saccharine sub-plot involving Angel helping out a Pre-Teen prostitute like she once was and a scene involving their Gary Glitter knock-off reading a story to some bums.  Throw in lots of random murder and you've got a movie!  The transition of Angel from a young girl to a woman who fights for herself is a bit awkward too, as most of the action is still done by others and she still needs saving at least twice.  It's a small step towards Feminism, I suppose.  As a whole, this is a more competent- albeit weirder- film than the original.  Can the series keep it up?  Hey, look up there! 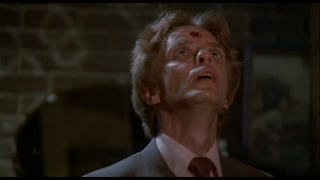 Next up, Angel returns after another time-jump to finally wrap up that whole 'my mom disappeared on me' plot.  Naturally, it turns into a plot involving modeling, 'Skinemax' films and human trafficking.  Stay tuned...
Posted by Alec Pridgen at 2:47 PM