Alright, now this is just silly.  After three films- two of which were flops in Theaters- the series appeared to be dead and buried.  Leave it to Corman to give this dead horse one more race though!  So, in 1993, a fourth film was made with, you guessed it, none of the original actors.  This plot involves Angel/Molly going, you guessed it, undercover to solve the murder of her never-before-mentioned friend.  Seriously, if Angel ever wants to be your friend, just say 'no!'  This bitch is a freaking death wish!  This movie is not exactly what you'd expect, so let's find out just what it is... 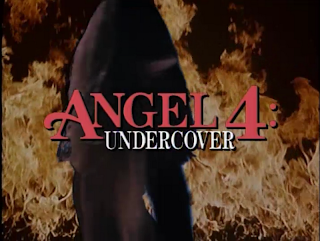 This is Angel/Molly.  No, really.  I can't believe that Baby Spice over here is really supposed to pass for the character! 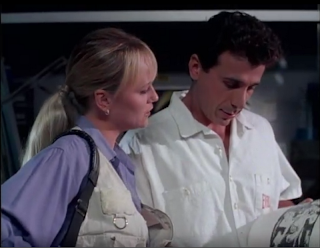 This is 'Molly's' friend, who was supposedly a hooker that she knew before.  I should just cut and paste my comment from Angel III, but I'll instead point out that this actress actually looks like Molly.  Hello!!! 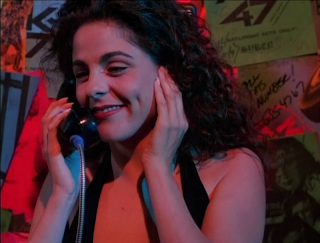 Her friend is working with a band called AK-47, who's lead singer kind of looks like Jeff Hardy.  By the way, a glam rock band in 1993- timely stuff, Corman! 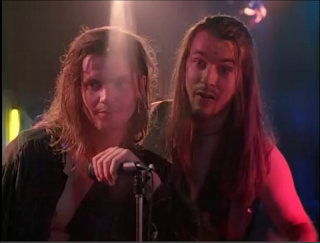 Roddy McDowall- shortly before appearing in Unknown Origin- is a Music Executive who is not exactly nice.  Despite being involved in some murders, he's not exactly punished in the film... 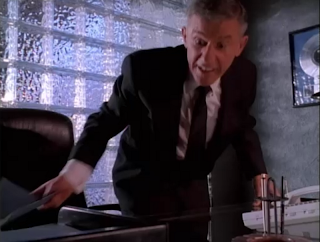 Angel/Molly has her friend get killed by the drug-addicted Lead Singer of the band and his girlfriend.  Saw that coming, right? 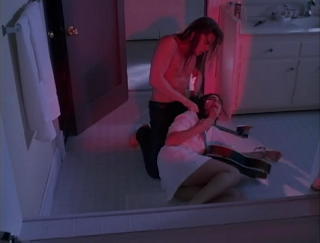 While Angel goes undercover in the band- looking like the man's dead girlfriend- the man starts to go crazier and crazier.  Our heroine pretty much forgets about the whole 'find out who killed my friend' plot because...sigh...the guy writes poetry. 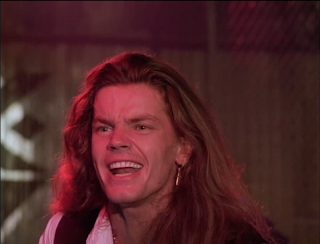 Rather than actually wrap up the plot involving payola and Patrick Kilpatrick- of Scanner Cop II fame- killing/hurting people, we get...sigh...the story of the singer.  He sings a dramatic and sad song...and dies...instantly...from falling a few feet with a chain around his neck. 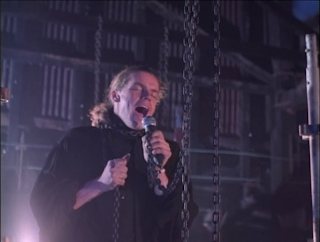 The girlfriend takes this well.  Nah, just kidding.  She leaps off of the stage at Angel, who's only recourse is to raise a broken guitar neck, causing her to get impaled.  You could have moved, you know!

Kilpatrick and McDowall are never punished, by the way.  The End. 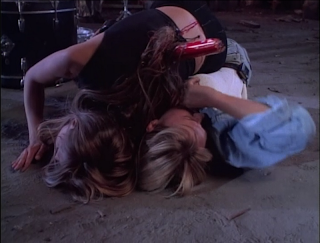 You really just could have stopped at three.  The plot of this movie is not completely-terrible, but it doesn't work for this film.  The Angel films appeared to be going on an upward swing villain-wise, even if the third film's one was a big over-the-top.  In this film, we get two mildly-evil guys who never get punished, a depressed rock star who kills himself and a 'whore' who dies because Angel couldn't just move out of the way.  Actually, let's address that death one more time.  Suppose the lady had landed on Angel- what would have happened?  Was she covered in spikes?  Was she wired to explode or something?  Angel's path from 'girl kept from killing the serial killer' in the original film to 'murdering a lady out of convenience' in this film is now complete!  There are a lot of other problems with this movie.  The pacing is not good, the focus is inconsistent and our heroine just plain forgets to actually do her job.  The only good people in this movie are the boyfriend- although he's a bit whiny- and the Pathologist- who tells her to get off her ass and do her job!  Is this movie an Angel film?  No.  Is this movie a good film?  Again- no.  It doesn't feature two stars...and this re-used joke though... 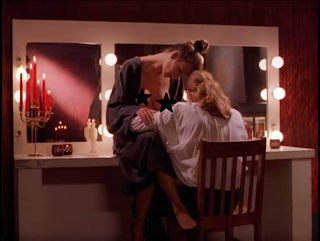 Up next, I celebrate Christmas Eve with a Foreign import that everyone is talking about.  When in doubt, why not join in?  Stay tuned...
Posted by Alec Pridgen at 8:00 PM