Angel times three.  We're back with the third film in the Angel series and a lot more has changed.  As his tradition, we have a new actress playing the part.  The film takes place roughly seven years after the last film, so you might be able to excuse this.  Although, again, they always cast actresses older than they're actually supposed to be for the plot, putting a big hole in that excuse.  In addition to our lead, her Supporting Cast is all gone too.  Rory Calhoun said 'No' to you guys?  The Yo-Yo Chaplin guy isn't here either?  Well, fortunately, they got a guy who vaguely looks like Reb Brown- and wasn't in Howling V- so I guess that makes up for it.  They also introduce a brand new tradition to Angel- presenting characters from her past that were never shown or mentioned before.  I think it's called a 'Qui-Gon.'  As the teaser mentioned, this film wraps up the 'my mother left me when I was younger' plot, although it just serves to set up the film's main story arc involving prostitutes segueing into porn (big step, I know).  To find out how not-final this film is, read on... 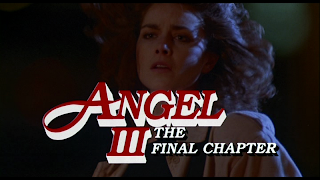 Remember how Angel/Molly was a Law Student in the last film?  Well, now she's a Photographer.  Who said anything about wanting to be a Lawyer?  Not me, obviously! 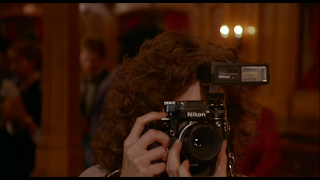 Angel returns to L.A. to find her mother, since a tip led her there.   Before we move on, take a moment to really enjoy this last bit of '80s fashion (the film was made in '89). 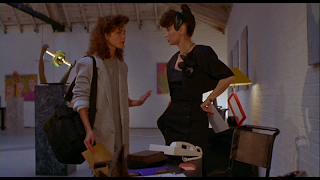 Unfortunately, the happy meeting is ruined by a car bomb.  Yeah, that plot thread was tossed out there just like the Inspector in Avenging Angel.  Note to self- never meet Angel! 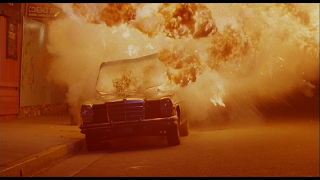 Now on the hunt for the killer(s), Angel bunks up with a friend of her's from her past.  I thought that this was supposed to be Yo-Yo/Chaplin, but it's not.  Unless this is somehow supposed to be the 'Gary Glitter' guy, they just pulled this character out of their ass! 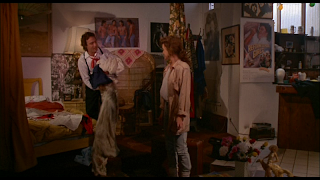 The group teams up with "Definitely Not Reb," since he made a documentary about the prostitutes in the area and has connections that allow her to go undercover.  No, really.  Next time I need to infiltrate a Civil War re-enactment, I'll call Ken Burns! 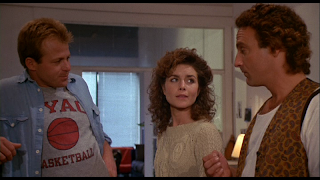 I had to fulfill the 'Random Nudity Reference' so here we go.  I should also note that 99% of the women in this scene are topless...but Angel isn't.  Corman lead actresses never do nudity.  Right, Slumber Party Massacre series? 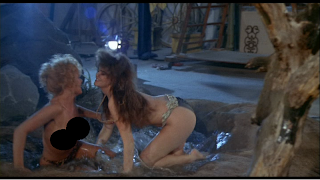 The trio go undercover at a party designed to hook up the prostitutes with rich businessmen.  How has this scheme been going on so long when they are this blatant?!? 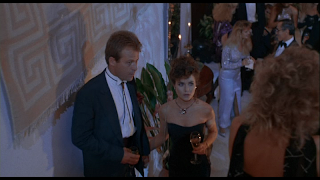 Richard Roundtree- star of Amityville: The Next Generation- is on hand as a kind, caring Police Captain.  Was Ossie Davis busy this time?  He has about four scenes, so that's something. 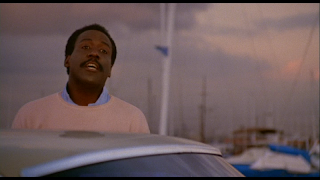 The finale of the film comes in a warehouse.  The lead villain is locked away in an Ice Cream Truck, while her enforcer gets a hook through the back and is hung out to die.  Our heroes.  The End. 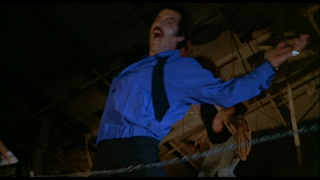 Not quite Final enough.  The plot of this movie is decent, but just feels forced.  The antagonists of Angel films seem to fit a certain mold...until now.  Low-scale for the first film, so it's a generic serial killer.  Raising the stakes for the second film, so it's some evil executives.  Trying too hard for the third film, so it's a business woman who hire prostitutes, makes movies with them and then sells them as sex slaves in exchange for drugs...which she then gives to the prostitutes and, well, you get the drift.  There are just so many elements to it that it makes it really easy to fall apart.  Case in point- Angel gets involved, because they kill her mother.  Why do they do it?  Because she was part of the scheme, which pointlessly-involved trafficking the drugs in via art exhibits.  How much are you paying for the exhibits that you ruin and, later, break to get the drugs?  Wouldn't that eat into your overhead cost?  Speaking of unexplained, how come they never rescue the one, nice prostitute who is sold into slavery?  Granted- you stopped the operation, but there's no mention of 'don't worry- we'll rescue her' or anything!  Add in the death of another prostitute before the finale and you have some bitter baggage for your happy ending!  The film is not as good as the second film, although they don't force in as much comedy this time.  A decent film, but a weak link for the series as a whole.  Hey, Walter Paisley... Next up, the final...final Angel film.  It's about as related as your dad's best friend's dog-walker.  Stay tuned...
Posted by Alec Pridgen at 10:53 AM