Mind the paperwork and giant monsters!  Troll Hunter is a film that I heard about long ago.  In fact, I even featured it's trailer upon the original release via the Internet.  Needless to say, I was excited.  This movie was guaranteed to be weird, possibly more due to it having foreign sensibilities.  That may sound a bit jingoistic (look it up if you must), but it's true.  You watch Executive Koala or Lucio Fulci's The Maniacs and tell me otherwise!  The thing about this movie that is both a turn-on and a turn-off (depending on your perspective) is the film's dry sense of humor.  It takes a while to get going- although not nearly as long as Big Man Japan (another case in point)- but is totally worth the wait.  The humor is weird and quirky, but I dig that kind of thing.  The plot plays out in an interesting way, although it does have the same problem with the 'found footage' aspect that Cloverfield did.  How am I seeing this exactly?!?  Aside from that, the movie is nothing like Cloverfield or Monster in terms of actual quality.  As such, I don't want to SPOIL too much for you, aside for one minor thing that barely qualifies.  To find out just what makes this import so special, read on... 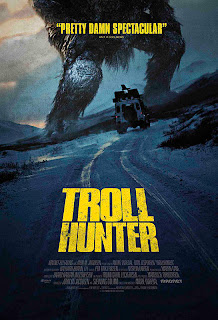 Our heroes are making a nature documentary covering an increase in the deaths of bears in the area.  The single-camera style is used quite well, especially in interviews like this... 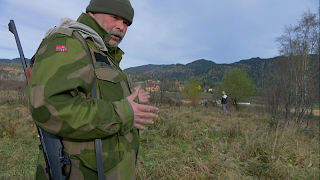 They find this hunter at a couple of sites and want to get the answers.  Finally sick of them following him and asking him questions, he relents and agrees to show them just what he does: killing trolls. 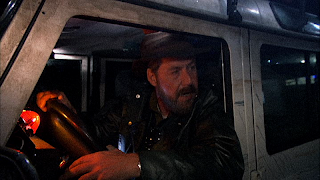 Our heroes doubt him for quite a while on his first night hunt with them.  However, they eventually learn that the man is not as crazy as he seemed... 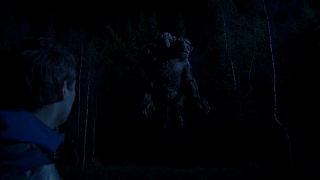 Want to know why this Troll has turned into stone when exposed to light?  Well, the movie does have an answer.  It's silly, but it sound scientific.  Works for me! 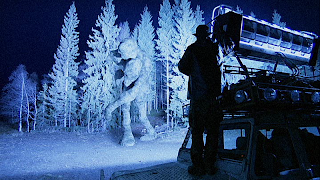 This movie is all about mixing the realistic and the surreal.  Case in point: paperwork for when you kill a Troll! 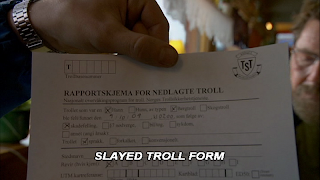 Why is the guy wearing a suit of 'bear armor' and holding a bucket of blood?  Wouldn't you like to know?!? 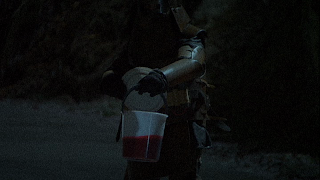 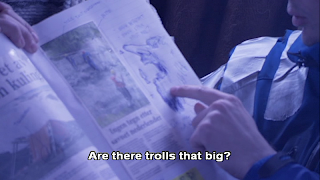 How did they get in this cave?  Why are they afraid of the smell they're putting out?  Again- wouldn't you like to know?!? 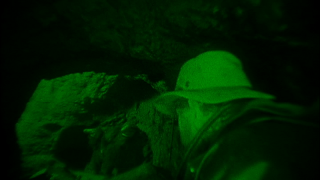 I'll leave you with this teaser image to seal the deal.  Want to see how this ends?  Watch the movie.  It's on Streaming now, so you have no excuse!  The End. 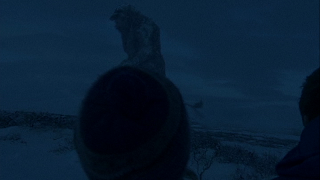 The one Troll that I actually like to talk about on the Internet.  The plot of this movie is great.  It's a bit of slow burn at first, slowly building up to the idea of whether Trolls are real are not.  The word 'Troll' is not even mentioned in the first several minutes.  When the creature finally makes an appearance, it has quite the impact.  The movie makes great use of their effects, very rarely making me ever really question whether I'm watching a collection of 1,000,000 pixels instead of a living, breathing creature.  It's not one-note either, as you get a number of different kinds, shapes and sizes.  By the time the final one comes on screen, the movie feels like its truly delivering on what is the best that it has to offer.  I wonder where they could go with a sequel, but I think that they could manage.  Troll Hunter II: Trolls in Suburbia anyone?  In all seriousness, this is a really good movie for those who have a warped sense of humor and enjoy subversive entertainment.  When the whole movie builds to a joke about whether or not Trolls can smell Muslims in the same way that they can smell Christians, you know you're in for something good... 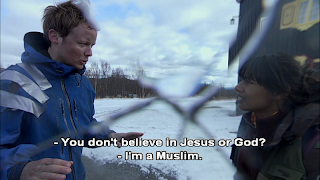 Up next, a whole week of crazy, foreign flicks (for the 800th time).  Japan adapts a crazy manga into an equally-crazy film- big shock.  Stay tuned...
Posted by Alec Pridgen at 11:00 PM