Stop me if you've heard this one before!  Today's film is certainly a quirky film, to say the least.  The plot involves a man in a red, hooded outfit (much like a Klan Grand Wizard) who steals some poison gas.  What does he do with it?  Threaten government officials?  Try to overthrow the city?  No, nothing logical like that.  Instead, he uses it to kill a bunch of buxom, college co-eds.  Yeah, that's what I would totally do too!  I will briefly mention that there is some confusion here as this film is based on a book by Edgar Wallace.  However, it references The Sinister Monk, which is supposedly a version of the same book...which was also made in 1928, 1934 and 1938.  Your brain hurt yet?  Good.  If you like the old Batman show, but wish that it were a movie, read on... 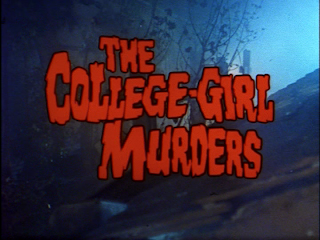 This man is an evil scientist who has made a killer nerve gas.  Now that it works, he uses it to kill his assistant.  Sure better than losing your 401K right? 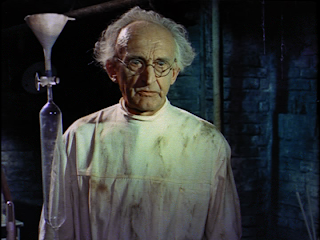 This crazy Monk character sets up a deal to buy the nerve gas...but just kills the scientist with his whip.

By the way, the human neck is made out of Cool Whip and snaps with a slight pull of a whip. 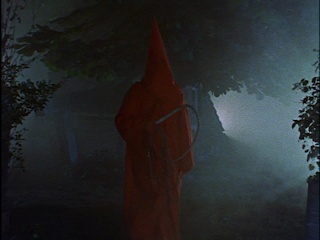 An overly-complex scheme is devised to break a prisoner out of jail, give him a gas-spewing device, have him kill a girl and then sneak him back into Prison.

Confused?  You should be... 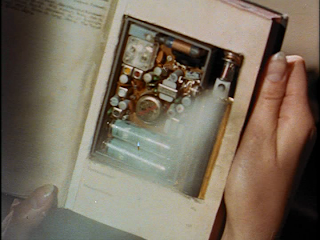 The hapless prisoner is a bit confused by the elaborate staging of the whole thing.  Join the club! 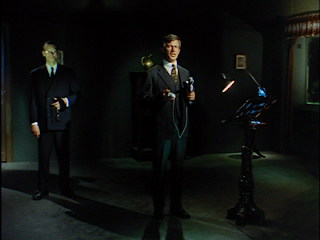 "Time to die, Random Cop!  We have to kidnap this one girl instead of killing her.  It will make sense later...sort of." 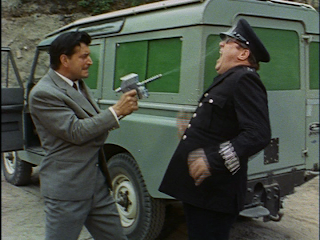 Late in the film, an alternate lead is introduced to go with our Detective and the Inspector.  He faces off with the man in the red cloak and hood...who is revealed to be the Aunt of the girl who was captured. 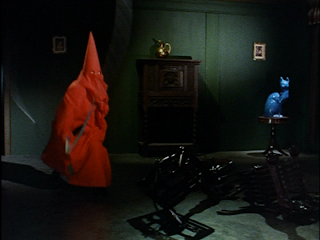 The real villain is eventually revealed to be her Uncle- after they take off his pointless disguise- and he explains that it was all about the money.  That was a lot of work for that! 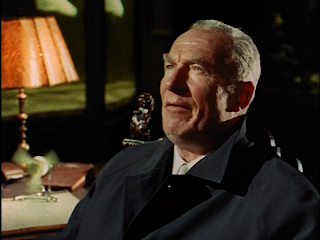 How do they resolve this plot?  The guy does the 'I'll Go Out With a Bang' cliche and gets killed by the 'Instant Neck Snap From A Whip.'

Oh yeah, our heroes also point out the words 'The End' appearing in a fish bowl.  Wah wah WAH! 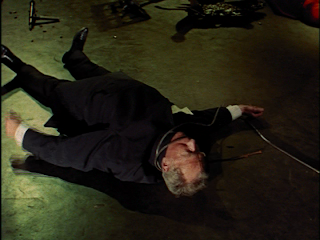 This sure is weird.  The plot of this movie is full of random moments, complex scenarios and bizarre humor.  The problem is that the whole thing does not really balance itself out.  The humor is just inexplicable and feels incredibly out of place.  The Inspector's character in particular is all about reacting in silly ways to trying to solve the crime.  People are dying!  This movie has a body count of at least six to ten people...but you have your fun.  The plot is kind of like a weird funhouse mirror.  When you look at it directly, it appears to be elaborate and differing from reality.  When you get down to the nitty gritty, it's just a piece of glass.  If this had been building up to something bigger, I might be more forgiving.  With all of that said, it is easy to have a lot of fun along the way.  For example, the movie was made in Germany, but is supposed to be set in England, but all of the steering wheels are on the wrong side of the car.  Whoops.  If you like a campy movie that is full of style (but nothing else), check this one out.  This guy is not as sold on the idea, however... 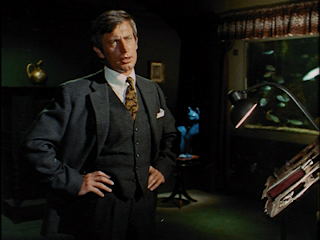 Up next, a film starring the late Paul Naschy.  It's not weird that he plays a ghost in this, is it?  Stay tuned...
Posted by Alec Pridgen at 8:01 PM