Another one of these?!?  I'm on the 11th out of 12 Films in the Andy Sidaris Set, although you could have told me that I was on the 27 out of 42 Films and I'd still believe you.  On the plus side, I got Bob to watch this one with me for one reason: Buff Bagwell.  After watching WCW's Superbrawl 1996 and not seeing Buff there, we decided to see what he was doing.  It was Day of the Warrior, a Film that actually came out 3 days after the Show itself!  Naturally, WCW did not promote this one bit.  Just a reminder: they went from the biggest Wrestling Company in the World to out of business in less than 5 Years.  The Story here is that Christian is now just a Producer again and the Series has essentially rebooted...in the second to last Film ever- naturally.  Andy Sidaris is back for the 11th Film in the sort-of-series called LETHAL Ladies, so, naturally, this is the first one to ever mention that name.  Oy vey!  This time, EVERYONE is gone...except for Julie Strain and the blonde with two obvious assets- neither of which is her Acting Ability.  The Story is oddly-similar in set-up to Mission: Impossible, although the Brian DePalma Film came out in May.  Could Sidaris have ripped off the general Plot through leaks and promotional material?  Possibly.  Could it just be a coincidence?  Maybe.  In any event, this whole thing is dumb, so let me just get to it... 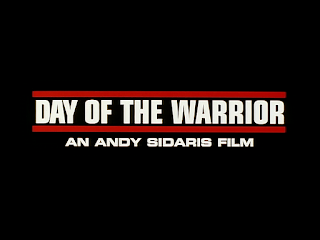 A hacker apparently broke into the System of LETHAL and took the names of their Agents!

Surprisingly, Joe Estevez isn't here to make a Cameo like Emilio in Impossible. 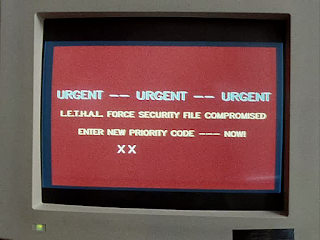 So after being an enemy agent (and being killed a few times), Julie Strain is now a Lead Agent.

On the plus side, you can see the early work of the Cinematographer from Justice League here. 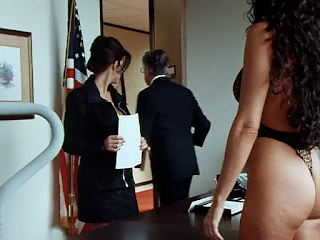 So begins a series of events that breaks down as follows...

- A bunch of agents are doing random missions.
- Things go awry.
- They finally join forces a good 40+ minutes into the Film. 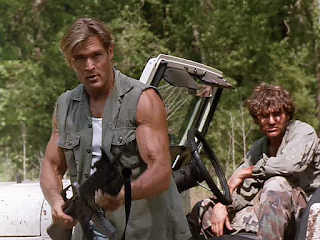 The villain here, as mentioned, is Buff.  He's the stuff...that isn't exactly racially-sensitive as a he plays a half-Native American Soldier-turned-Wrestler-turned-Spy.

Fun Fact: Buff was fined for hurling racial slurs at a Crew Member in WCW. 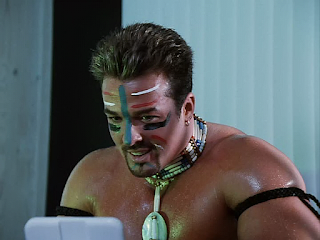 Speaking of weird racial stuff, Gerald Okamura is also alive again and an Agent too!  His cover in Vegas- an Elvis Impersonator.

Meh, Bruce Campbell did it better. 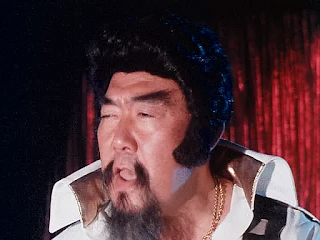 Naturally, the pointless, filler Sex Scenes are here.  Hey look- the Crew is there too! 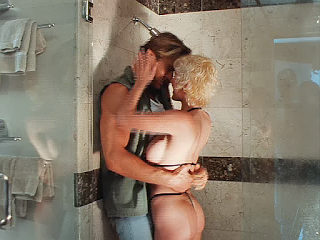 Buff's big plan is to...run way to South America.  First, however, he wants to kill Okamura and Strain in a Wrestling Ring.

The Baby Oil Budget must have been HUGE on this one. 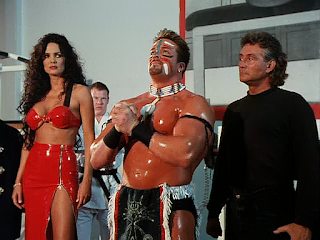 Oh and the Mole is Random Agent #13.  This reveal means very little. 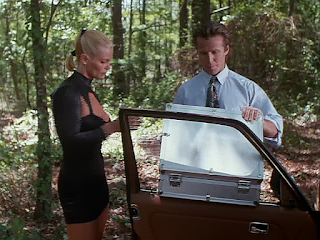 In the End, the Villains are all caught and they wrap things up...not in a Hot Tub.  So close on Andy Sidaris Bingo!

There's so much goofiness here that I didn't even mention Obregon and his silly beard.  Oops.  The End. 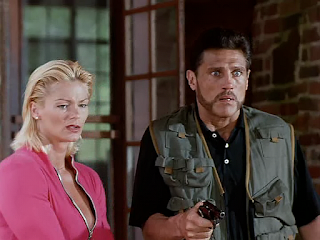 Another Andy Sidaris Film.  It is kind of very dumb.  It is kind of very repetitive.  After two years away from Films entirely, he came back to make this?  There are very few 'inspired' things here and I'm being pretty generous.  Okamura as Elvis- dumb fun.  The whole Casting a Wrestler as a Wrestler thing- again, dumb fun.  The rest of it is just kind of silly if you've never seen one of these Films or very mind-numbingly redundant if you've watched more than one of them.  I don't hate it- that would require too much emotional investment on my part.  It is pure 'turn your brain off' entertainment, albeit worse than usual.  On the plus side, Julie Strain's wrestling gear did inspire someone with a similar look...

Next time, I go to the Outpost for real.  Will The Punisher survive this trip?  Stay tuned...
Posted by Alec Pridgen at 11:37 AM