The wrong kind of Wake to try and achieve.  Today's Film is The Gravedancers, a 2006 Horror Film with an odd little premise.  The Film tells the tale of 3 people that anger some spirits by dancing on their graves after, well, imbibing too many spirits.  It was apparently inspired by the Haunted Mansion from Disney.  I guess this is arguably a better version of this than the Disney one still!  The Film was apparently pitched in 1999, but didn't come out until 2006.  How did it get released?  Why as part of the After Dark Horrorfest, of course!  Incidentally, that's not still a thing right?  I'm too apathetic to Google it, if I'm being honest.  Notable people include Dominic Purcell- before slumming it in Uwe Boll Films-, Tcheky Karyo and Director Mike Mendez- of Big Ass Spider.  With that in mind, it sure is 'shocking' to see this turn into a Creature Feature by the time the Third Act rolls around.  The Director of Lavalantula did this?!?  No way!  It is a strange, mixed bag of serious and silly.  Oh and it's for this Holiday since the crux of the Film is based around an Irish Wake.  I know, I know- I thought it would be more Irish.  I'll do you next year, Shrooms.  Are you ready to dance a jig on some plots?  If so, read on... 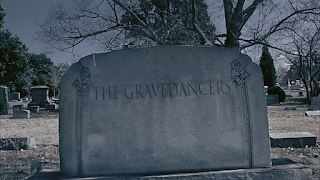 In the wake of a friend's death- he's so important that he's played by a Producer in one Photo-, the group attend his service.  After Purcell's fiancée leaves, the remaining trio drink.

Is this Irish enough yet? 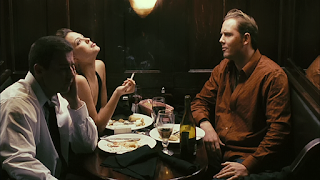 They go to the Cemetery and drink- as you do- when one of them finds a note.  This inspires them to dance on some graves.

Remember this note for later. 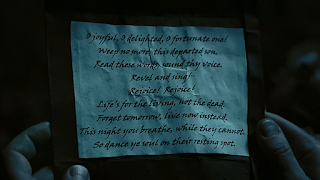 So, bearing mind that she didn't do anything, the wife of Purcell is the first one to be haunted.  I mean, it's in Purcell's House, but still...why? 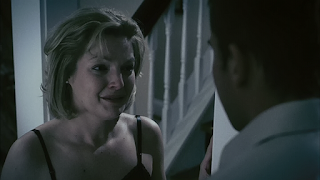 Their friend Kira is found in her House having been sexually-assaulted.  What fun!

Oh and this bearded guy is from Cabin Fever.  I don't know why, but alright. 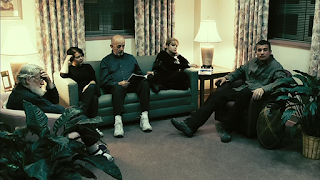 This woman continues to be haunted.  Seriously, why does she keep getting picked on?!? 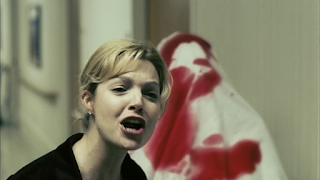 The third guy calls some Ghost Hunters- including Karyo- who arrive within hours!  They eventually discover that the spirits are all 3 killers who are super-evil.

The only solution: take the bodies and rebury them.  Of course. 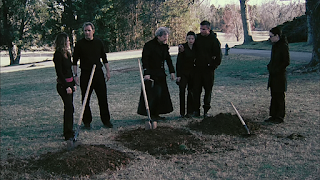 It's the Third Act, so the plan didn't work- I'll explain later- and the Ghosts are empowered.  Apparently they get stronger as the Month-long haunting time-limit, because reasons.

On the plus side, this Movie finally has some good visuals- creepy as they may be. 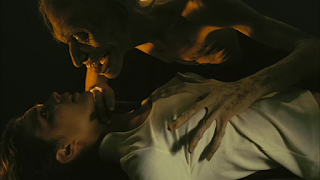 It all builds and builds to the point of insanity.  By the end, the giant face of a ghost appears and chases our Heroes in a Hummer as they crash through walls to toss some heads in a grave. 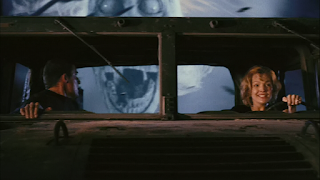 In the aftermath, the duo bury their friends and we see the Caretaker putting a new note on a grave.  Sequel Bait?  Why not?

Oh right- no Sequel.  The End. 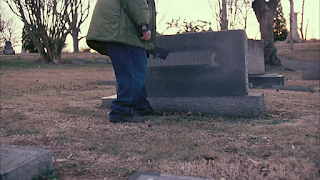 A weird bit of fun- eventually.  The whole Plot isn't that unique.  It is a slightly-different way to get to the same point: killer Ghosts.  To the Film's credit, there is a mix of them and they do things a little differently.  You get the Rapist Ghost, Pyromaniac Ghost and the Axe Murder Ghost.  They each have their own looks and feels, so fair play to you.  The execution- no pun intended- isn't that consistently-great though.  The build up of the ghosts- like tiny, fiery foot steps and piano music- isn't that interesting.  I should also note that there is ZERO build-up with the third Ghost- he just goes right to rape, apparently!  The problem with the Film to first note is the mix of Tone and Pacing.  The Film has a slow burn, but also indulges in a lot of unnecessary Drama.  The fighting between the group is kind of uninteresting, if I'm being honest.  It also slows things down a bit too.  On top of that, it stands in stark contrast to where the Film ends up.  By the end, an Axe Wielding Ghost summons an Axe from outside like it's Mjolnir.  The Ghost have the power to literally change the world around them, moving the gates closer to the House to trap them in!  They get chased by a giant ghost head!  I know that Mendez likes to indulge in some weirdness, but I feel like the Film would have worked better if it was more of one or the other.  It is like mixing your Pinot Grigio with Pop Rocks- who does that?!?  I will also note that a tacked-on Opening Kill was from the Studio and the Director didn't do it.  Now in your in the illustrious company of The Birds 2.  You may love it for the Drama.  You may love it for the silly Horror.  In the end, I'm not sure that anyone truly wins.  Well, actually, that's not true.  Their 'corporate sponsor' here sure did win. 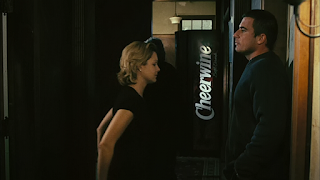 Email ThisBlogThis!Share to TwitterShare to FacebookShare to Pinterest
Labels: after dark, holiday