After all this time, I finally went back and reviewed this!  This is one of those Films that I apparently watched, commented on (in a Buy the DVD! feature), but didn't actually review.  I don't know how that happens.  Today's Film is Dracula vs. Frankenstein, a 1971 Horror Film from classic crap Director Al Adamson.  He's the guy who made Horror of the Blood Monsters- the Film 'gumbo' that combined a Filipino Caveman Film, 40+ year old Stock Footage, Color Tinting, a bad Sci-Fi Film and a Vampire Opening added to finally sell the Film.  He also made a Film or two with Colonel Sanders- no lie.  With such a Resume, it is only natural that Adamson would make the fifth best Film to feature the duo so far- just behind House of Dracula, House of Frankenstein, Abbot & Costello Meet Frankenstein and the Egyptian Remake of Abbot & Costello Meet Frankenstein.  I kid, I kid- it's at least funnier than the last one I mentioned.  The Plot involves the Doctor, the Vampire, the Monster, some Hippies, a little person, a Singer and a bunch of random victims.  This one sure is something.  Is it good?  Of course not!  Is it memorably-bad and/or fun?  Let's see... 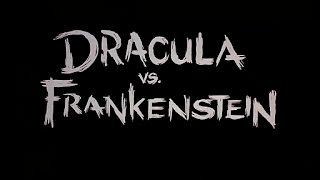 A Singer goes looking for her missing Sister somewhere around the local Pier.  The first thing that happens is she gets LSD put in her drink, so she's off to a good start. 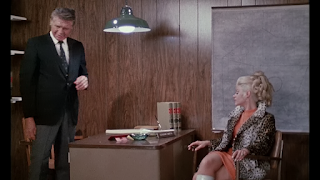 At the same Pier, a barely-hidden Dr. Frankenstein runs a Horror Show.  He gets a strange guest- Dracula!  He wants to use his genius for his own ends. 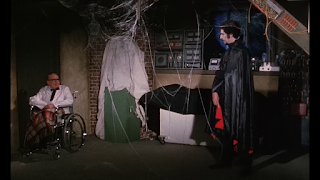 Lon Chaney Jr is here in his last role.  His voice was so gone from Throat Cancer that he just grunts...but at least he's happy to be working. 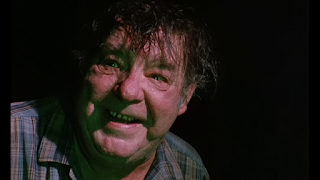 Unfortunately, he's just the mute mutant sidekick here, regressing far from when he was the Wolfman and the same man playing Frankenstein was playing basically that role in House of Frankenstein. 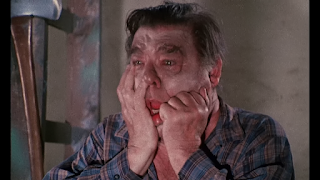 In between random killings, Dracula exposits that he found the Monster's body and lets the Doctor revive it for revenge.

Said Monster has seen better days, as the Stinger will show you more clearly. 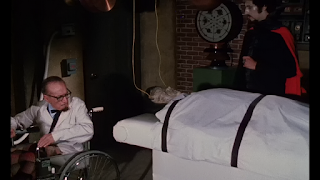 The Singer- remember her?!?- starts to get close to this older Hippie Guy, who helps her look for her sister...when he's not telling her to give her space...five seconds before telling her to look again.

Here's the weirdest part: while near the Pier, he hears the sound of the hidden hatch opening on said Pier.  This is following a woman's cry for help and the bloody axe murder of three men- which he doesn't hear! 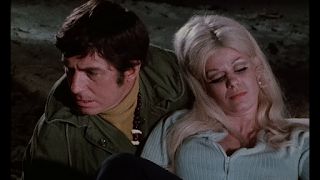 It all comes to a head as him and the Singer confront the Scientist.  His little person helper has a strange bit of (I guess) comeuppance as he meets a strange end a bit later.

Holding an axe, his weight proves to be too much for the door, which opens.  He drops the axe, but also pulls down a cage holding a puppy (he's fine, PETA) and somehow falls head-first onto the same axe.  Logic! 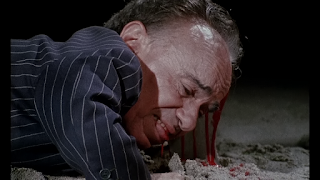 Things take a very abrupt turn as the Doctor dies- also in silly fashion- and Dracula manages to elude the Police after shooting our Hero with his laser ring.  By the way, he has a laser ring- it's magic.

This leads to the climax out by the Woods.  With his plan ruined (it involved blood making him invulnerable FYI), he tries one last bite on our Heroine, which the Monster takes issue with. 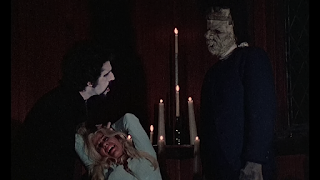 This leads to a brief and silly tussle to justify the Title, which ends in the Monster's head being ripped off.

This does stall Dracula long enough for the sun to kill him (with an effect that is trumped by even early Universal stuff).  The End. 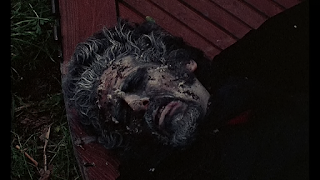 It's all so silly.  It's all so dumb.  It's all so directionless.  The Movie has a basic Plot- Woman looking for her missing Sister, only to find out that she was captured by a Mad Scientist.  That's not enough, so let's throw in Dracula.  That's not enough, so let's make that guy Dr. Frankenstein and bring back the Monster too.  Do we have time for a 'Doctor uses the Monster to get revenge' Scene?  Excellent!  Still not enough?  Let's add in Chaney as an axe-wielding mutant guy who kills random people and sometimes abducts them too.  This is still feeling a bit sparse, so let's throw in Scenes at a Horror Show, which we'll just say that the Doctor runs at the Pier.  I still feel like we need more, so let's put in a couple of Songs and a bit where our Singer trips on LSD.  Well, if LSD is in the Plot and this was actually shot in 1969, let's add a bunch of Hippies.  Oh and Bikers too.  So yeah, this is a bit of a hodge podge Plot.  Apparently the Film was originally made without Dracula, which explains some continuity issues involving Naish's Frankenstein appearing older and more frail in the middle of the Film.  Fun Fact: Chaney's actual last Film (his part was shot in 1969) was a different Al Adamson Film...made on the same Ranch where the Manson Family lived.  Awkward.  It's all kind of dumb and you can't be mad at anything in it.  Is it a Cult Classic?  Yes.  Is it good?  No- it's a Cult Classic.  It's still better than...whatever the hell this face is supposed to be made of. 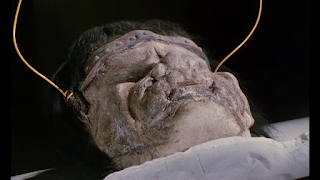 Next time, I celebrate a religious Holiday with...a Stephen King Film.  It's a tenuous connection, but I have put off covering this Film for Years, so screw it.  Stay tuned...
Posted by Alec Pridgen at 9:51 AM