While technical issues have delayed the Raptor review, I can still dig into some Asylum crap!  I bought this movie a while ago in the 'Please Buy This and Take It Off of Our Hands' Section in MovieStop.  This makes it the only Asylum film that I own.  Will that change in the future?  Possibly, but we'll see what happens.  So that makes today's film SuperCroc (as they spell it).  First off, you're probably wondering why I bought it.  Well, this 2007 film is oddly hard to find.  Even when nearly every Asylum film ever made (with the exception of The Hitchhiker) was on Streaming, this film was not.  Even now it isn't.  Is someone trying to hide this film?  Well, the film is about...you know what, screw it.  It's called SuperCroc- you know exactly what it is about.  You want to know if it's bad, cheesy-bad or laugh-out-loud bad?  To find out which, you'll have to read on... 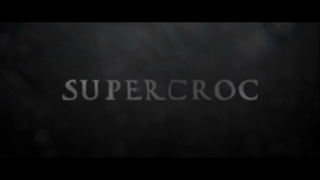 Rather than jumping right into the action or choosing to set everything up, they chose some sort of awkward middle-ground.

They skip the 'monster arrives' bit, but don't show us action either.  Instead, we hear about these soldiers wedding plans.  No, really. 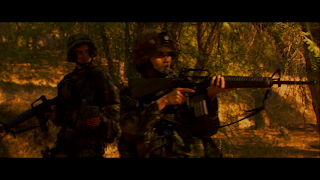 You know what else helps a movie not be interesting?  Spending half of it in a random room full of talking heads.  This is SuperCroc right? 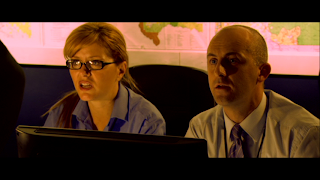 Oh and I love that they think that THIS could be a swarm of bees or something.  All I can think of is the joke from Sealab 2021.

Captain: Where is it?
Sparks: It's that Squid-shaped object on the Radar. 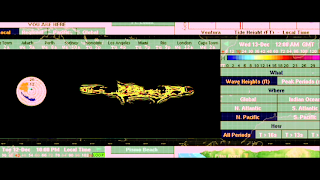 So that's the SuperCroc.  According to the DVD box, it's 25-feet tall.  Nowhere does it say that it's a terrible CG effect though.

So much for truth in advertising! 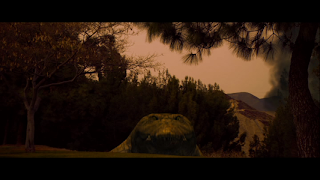 Another thing the movie does well is NOT show you the action.  In this scene, jets fire a missile at the Croc. What do we see?  This. 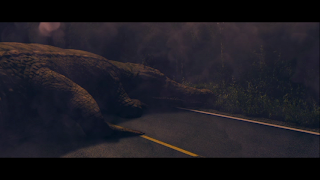 Instead of showing us stuff like the Croc fighting a tank or smashing up houses, they show fake newsfeed that says that it smashed up a town.  Oh and more of this. 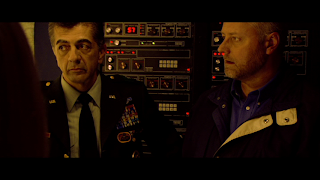 A whole sub-plot involves the lead scientist trying to study one of the eggs to make body armor.  It ends like this- abruptly. 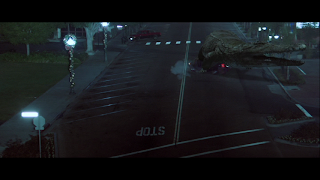 Ready for the disappointing finale?  After shooting the thing all day, one person goes 'attack the bottom of the thing not armored on the bottom.'  It's time for... 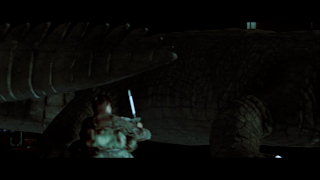 ...an off-camera explosion.  Jaws: The Revenge even showed us the monster exploding (as implausible at is was), but you know, have fun not showing anything interesting.

Throw in some sequel bait and we're done.  The End. 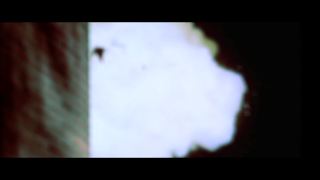 This is just sad.  Look- The Aylum doesn't really make good movies.  That said, they make films that generally cater to a certain market.  On a related note, I hate all of you who buy their Haunted House films- you're why they keep making them!  This movie is just amazingly-bad for all of the reasons that you think.  On top of that, it's not all that good for the ironic reasons that Asylum films can be.  Sure, the effects are bad, but you don't get to see enough of them.  None of the really ridiculous stuff from future Asylum films- i.e. the Shark attacking the plane or the 'Fend off Piranha with the Bicycle Kick'- really show up.  The film is chock full of set-ups for them...but has no pay-off.  They really just seem to be messing with us.  'Ha ha- we won't show you shit!'  It would be like if a Godzilla film spent 75% of its run-time in a Board Room and told us about what the creature did.  If you can't film your script, write a new one.  I can't imagine that they had a giant budget, wrote a script and suddenly got the money taken away.  If you can track it down, it's kind of funny.  If nothing else, you can see the Woods re-used from Alien vs. Hunter, Journey to the Center of the Earth and I Am Omega, along with this piece of familiar B-Roll... 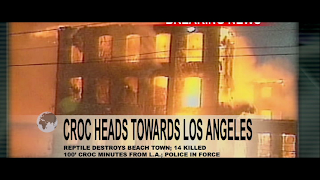 Email ThisBlogThis!Share to TwitterShare to FacebookShare to Pinterest
Labels: The Asylum