Anime is certainly interesting- that's for sure!  Today's film is Dead Leaves, a movie recommended to me by someone outside of my usual circle of Bloggers.  She's a nice, young lady, so why not review something I've never heard of?  As it turns out, I kind of like this film, even if I don't 'get it.'  It's very much in the same vein as stuff like Excel Saga, only without the Fourth Wall breaks.  It's bizarre, randomly-violent and nobody really stays 'on-model' (animator slang for characters varying in shape, size and perspective).  It's a bizarre tale of amnesia, super-mutants and lots of shooting.  It's...well, I'll just let the film speak for itself.  To interpret the insanity (kind of), read on... 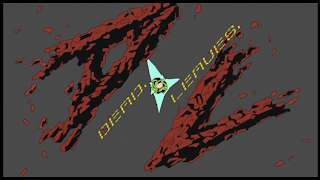 Two characters wake up in a desert field with no clothes, possessions or memories.  They do the only natural thing... 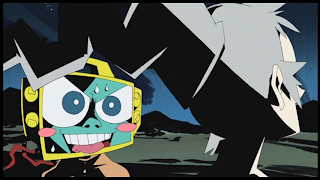 Go on a robbery/shooting spree with the Police.  That's what I do whenever that happens to me! 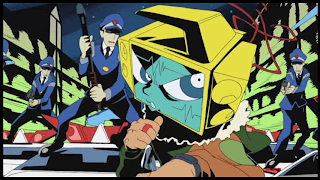 Things go awry, however, and our 'heroes' end up in a Space Prison near the Moon.  It's Fortress 2: The Anime! 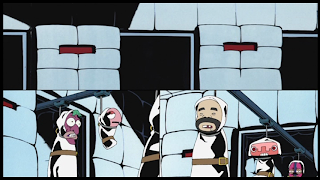 The guy- Retro- is still a guy (in spite of having an old TV for a head) and is still 'in the mood.'  This is actually a key scene, in spite of how freaky it is. 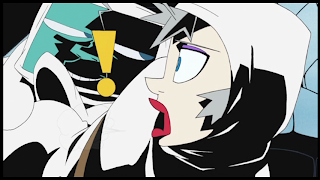 They break out of their bonds and lead a giant Prison break.  Cue the random, bloody violence! 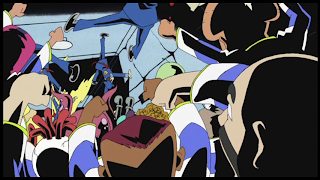 Our heroes get some news.  I won't SPOIL it here, but I can tell you that it affects the plot in a major (and ridiculous) way. 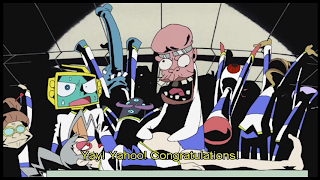 Gee, there are two Super Mutant Guards and two heroes- I can't see where this is going. 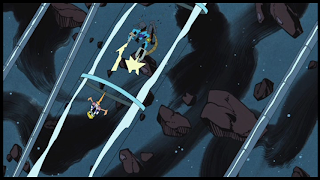 I won't- nor could I possibly truly- SPOIL the Third Act of the film.  It's a bizarre mix of revenge, pseudo-science and mutation.  It's... 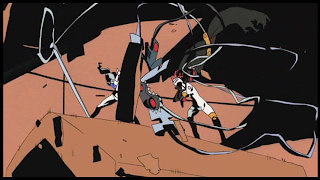 ...all about the explosions, really.  It's that kind of film.  The End. 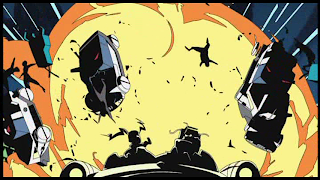 Honestly, it's the kind of crazy that I like.  To be fair, the structure is loose and the story still doesn't make a whole lot of sense.  In the film's defense, that's kind of the point.  This is not meant to be a serious story about people dealing with their problems, sorting out their feelings or any of that crap.  This is a pretense for bizarre and random violence with mutant people.  If you thought otherwise, I direct you to the man with a giant drill for a penis.  It's that kind of movie.  As a side note, it's hard to imagine that stuff like that could be done in real life, but Tokyo Gore Police is proof of that.  If you like the bizarre, crazy Anime and aren't shy about cartoon gore, I recommend this film.  It's certainly an acquired taste, but it's a nice slice of crazy that even a non-Anime Fanboy can recommend.  By the way, if you ever sit next to this guy on the Bus, I suggest that you move! 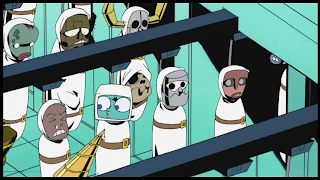 Next up, a film about the Devil...'s tiny, annoying baby.  I was warned about this film, but I never listen anyhow.  Stay tuned...
Posted by Alec Pridgen at 11:50 PM

Email ThisBlogThis!Share to TwitterShare to FacebookShare to Pinterest
Labels: anime