What are you- chicken?!?  In the case of today's creatures, the answer is kind of 'yes.'  Today's film is Carnosaur, Roger Corman's answer to Jurassic Park.  He said 'This made how much money?!?  Make me one, but for one-one-hundredth of the cost.'  Now you long-time readers of the site are probably asking 'Why review Carnosaur almost two years after Carnosaur 2?'  Well, there's no real good answer.  The sequel was available on Disc at the time, while the other films weren't.  I got bored one night- since most of my crap is already in my new place- and watched Carnosaur on Streaming.  Were you expecting something deeper?  If it makes you feel any better, I'm going to go ahead and do Carnosaur 3 next.  You'll have to wait, shitty horror film with Kevin Nash!  So what is the original about?  Well, it's about a Dinosaur or two running loose in a small town (sure is cheaper than building a whole Park).  You won't possibly get the two films mixed up, no matter what Gene Siskel said on the box.  That said, Carnosaur has its own sort of crazy charm to it.  To find out just what you may have been missing for the last 20 years, read on... 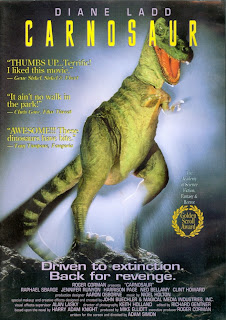 Why do the Credits roll over Stock Footage of Chickens in a plant?  The answer to that is something extremely-silly, so let's cover it now... 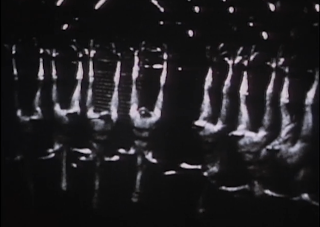 Due to accident/design, Dinosaur genes get into some Chickens and they infect the local supply.  I feel for the Chicken that laid this thing... 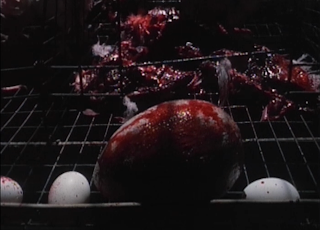 With a single Dinosaur- which may be a Raptor or a mini-Tyrannosaurus Rex (pre-Area 407)- on the loose, the body-count ramps up.  The other thing that shows up a lot is... ...some of the goofiest effects in the last thirty years.  Seriously, could that BE more of a puppet.  Damn! 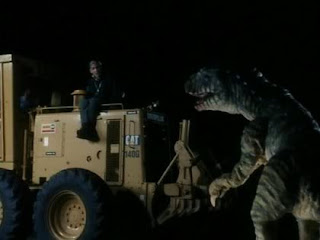 Speaking of goofy, this one scene features the puppet Dino- which again, is what size exactly?- biting a lady's leg off.

Oddly, she screams while its biting, but suddenly gets silent once it bits off of the limb.  Huh? 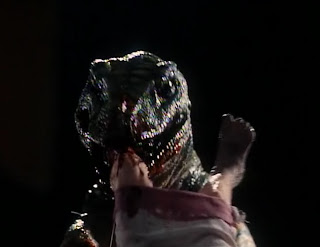 The whole thing boils down to this one lady- Diane Ladd- and her plan to get rid of the human race.  Her plan- infect the human race with a virus to make us lay Dinosaur eggs.  No, really.

My issue- she goes on like this for ten minutes, while our hero just sits there HOLDING A GUN ON HER. Do something, you idiot! 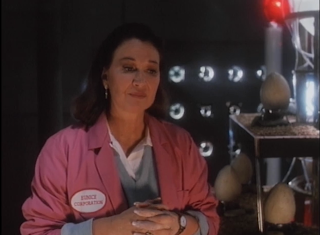 In a completely superfluous scene, Black Sheriff wanders onto the Universal Lot to kill a Dinosaur- which, for no clear reason, is a Raptor.  The main Dinosaur is a T-Rex (natch), so how did this one come about? 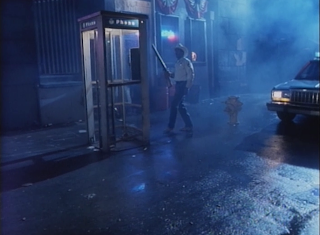 Not content to just rip-off the concept of Jurassic Park, Corman rips off Humanoids from the Deep ripping-off Alien with this shot of Ladd delivering a Dinosaur.

Oh and she gets burned to death by a Hazmat team, since we're ripping off Zombi 3 while we're at it.  Yea. 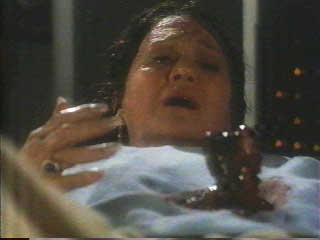 For the finale, our hero and his hippie girlfriend fight the T-Rex using machines from the quarry.  This scene does boast the best effects of the film- hurray for low standards!  It's also needlessly gory since that helps sell a movie.

After that, the Hazmat team kill our heroes and they literally toss out a plot point about 'artificial wombs' right before the end.  Seriously, that happens!  Super dark ending for the win! 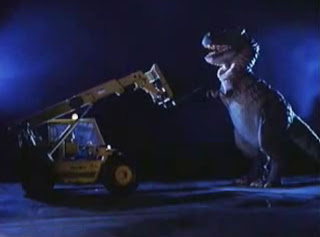 When puppets run wild!  The film has some legitimately-good moments to it, but not a lot.  The most fun you'll have with this film is laughing at the silly plot, goofy effects and awkward acting.  There aren't really any great Actors in this movie- at least in the classical sense.  Clint Howard- that's all I need to say.  The film is chock full of goofy stuff, whether it's a weird scene in a Diner, the super-forced romance sub-plot or the overly-long 'explain the plot' scene near the end.  The film is helped by its goofy effects and over-the-top gore.  There is a lot of random killing in this movie too, so it's never really boring.  Any film in which Clint Howard is stealth-killed by a Raptor has some merit to me.  If you view this as a serious film, you'll be very disappointed.  If you view it as a Corman cash-in film, you can have a good time with it.  Take us away, random pair of pictures on the wall... 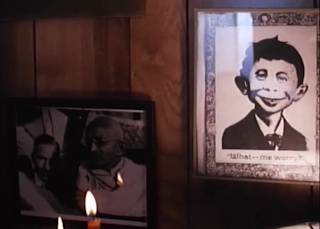 Up next, the third and final film in the series (not counting Raptor- long story).  When in doubt, throw in Marines!  Stay tuned...
Posted by Alec Pridgen at 11:52 PM