Is it better to leave well-enough alone?  Today's film is Shaft's Big Score and it raises that question.  Before I do the review, let me ask you this- have you heard of this movie?  I'm guessing that the number of hands that will be raised are minimal.  That's kind of my point- everyone remembers Shaft, but that's about it.  Besides Big Score, there is also Shaft in Africa, the Shaft TV show (which lasted one season) and the 2000 Remake.  While the latter is notable for starring a pre-Batman Begins Christian Bale, it is slowly fading into obscurity as well.  It's not a bad movie, but it's not a great one either.  While it is hard to tell a Studio to stop when the money appears to be flowing, maybe it's something to consider.  In the meantime, let's look at the first sequel to the seminal Blaxploitation classic.  Made 1 year later, Shaft is back on a new case that involves murder, money and, naturally, an evil white villain.  We're just terrible people, aren't we?  This is all about 'the man' and Shaft protecting the little guy.  Granted, the film takes a few famous steps to kill his 'every-man' image a bit here, but I'll get to that later.  To find out what the non-fuss is all about, read on... 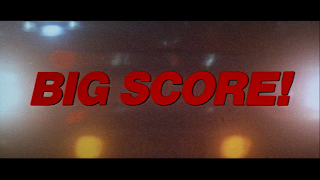 Shaft is hired by a man who is concerned about his safety and that of his sister.  Well, one of them is taken care of pretty permanently. 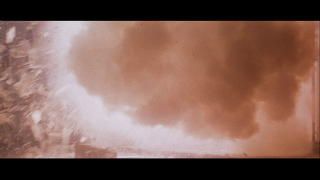 The man behind the bombing turns out to be this guy- the whitest guy they could possibly get (since Sheamus wasn't born yet). 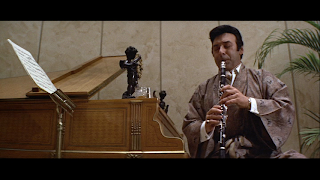 Shaft goes into action, which mostly involves him fighting people, shooting people or being shot at by people.  Suck it, Sherlock Holmes! 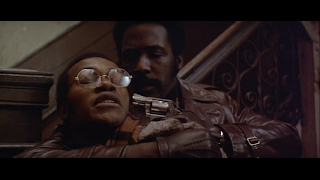 In a truly Shaft moment, he shows up at the other villain's apartment right after he leaves.  He...well look at this shot and guess what happens. 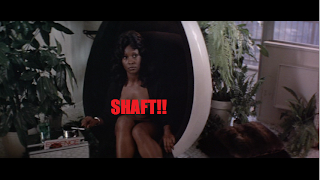 In a bizarre twist of fate, Shaft is accused of working for a rival businessman (which he's not).  After this, he ends up working for said businessman.

Oh and his lead henchman has the opposite of an Afro.  That's...unique. 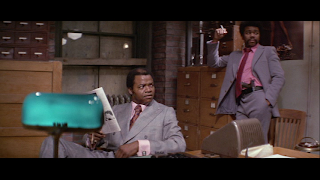 In a nice tough, the film proves that it's not racist by giving you boobs of a different shade as well.  Good for you, Shaft's Big Score. 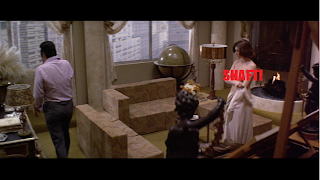 Since the plot is so paper-thin, it gives me a chance to highlight this bizarre dance performance in a Club.  How much time did this have to take to apply the paint and, more importantly, how can I get that job? 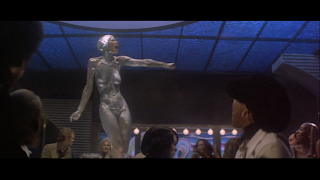 Back to the plot, Shaft survives a car chase which turns into a boat chase that itself turns into a normal chase.  Oh and this guy gets super-killed! 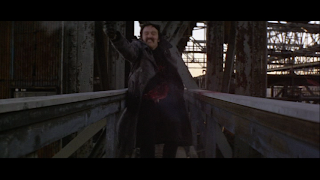 The thing that polarizes people towards the film is that Shaft- hero of the every-man- takes out a helicopter with a super-powered shotgun.  It's cool...but maybe not Shaft-like.  The End. 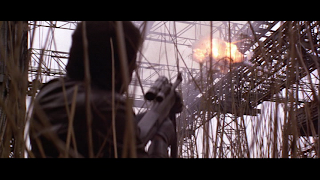 He's a bad mother- shut your mouth!  Damn voices in my head.  Anyways, this is not a bad movie.  It's not a great movie, but it's not a bad one.  The story is simple, but effective.  Bad guys want money, so they go after an innocent woman.  Fortunately, she has Shaft on her side, which guarantees that she'll make it to the end.  The good stuff includes the action- mostly-, the music and the overall feel of the film. Throughout the whole thing, you feel that Shaft is a good guy.  The problem is that by upping the scale of the film, they go away from the core of it.  I liked the car chase- it's a rarity in these days- and even liked the boat chase.  One problem is that the continuity between the boat part and the section with the helicopter chasing it is a bit off.  The helicopter just kind of flies behind it for a few minutes before taking out the motor in one shot, conveniently when it is right near the land.  If you're going to use a helicopter, just use it.  The other big thing is Shaft using that super-awesome shotgun.  It's cool, but it just doesn't feel like something Shaft would do.  The film is honestly worth checking out if you liked the original, since it mostly follows suit with that one.  Take us away, punch that misses by a mile (which they put in slow-motion- bonus!)... 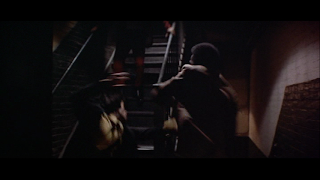 Up next, I celebrate Valentine's Day with my usual brand of twisted film.  You'll see that love is confusing, bleak and...involving a corpse.  Stay tuned...
Posted by Alec Pridgen at 10:27 PM