Jim Wynorski is a master of recycling- at least when it comes to movies.  For example, his 2001 film Raptor is a pile of Stock Footage with a new story built around it.

In fact, even the DVD Cover uses Stock Footage. 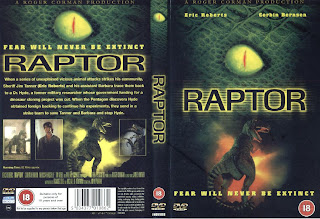 You're probably wondering two things.  One- why is there a T-Rex on a DVD Cover for a film called Raptor?  Two- why does it look familiar?

Well, here's the answer to your second question... 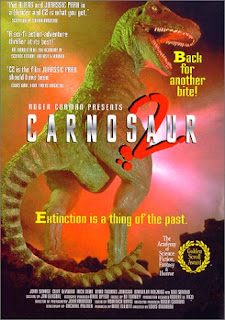 Yes, they just took the T-Rex from the Carnosaur 2 Box Art, re-shaded it and slapped it onto this one.

It is only fitting, however, as the film uses Stock Footage from the film, as well as Carnosaur, Carnosaur 3 and many others.

As a Bonus, I'll include the Trailer to the film as well.  Keep an eye out to see how much of it is Stock Footage.
Lastly, I have a request- if you can give a link to see Raptor (that's not Bit Torrent, if possible), I would be very appreciative.
Posted by Alec Pridgen at 6:41 PM