A neat idea...but not so neat execution.  Today's film is Monster Brawl, a 2011 low-budget Horror-Comedy that has quite a Canadian feel to it.  The fact that its two leads are both Canadian icons- Art Hindle and Dave Foley- certainly doesn't hurt.  The film is about a guy- who only ever appears in the beginning- who organizes a secret PPV in which monsters fight each other.  Again, it's a neat idea.  I don't fault Steve Cook for the idea.  My problem is, well, the actual movie.  I'll get into it more in the actual film, but the structure of it leaves a lot to be desired.  On top of that, it doesn't do much with the wrestling concept to play for laughs and some characters are entirely one-dimensional.  Case in point: Witch Bitch.  The only joke is her name...so I hope you like it.  With that said, there are a few people I like here, so it's kind of a shame to have to be so harsh.  To find out why I still have to be, read on... 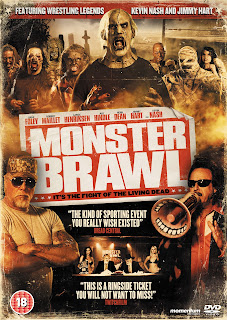 Dave Foley and Art Hindle are the Commentators for Monster Brawl, a PPV held in a secret graveyard.  The gimmick- two monsters enter, they fight and only one survives.

How this super-secret, unsanctioned PPV is being seen by anyone is my question.  It's The Condemned all over again! 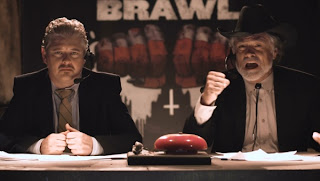 To give the film a wrestling feel, Jimmy Hart is here.  I guess they had a small paycheck and whatever uppers he takes these days.  I kid, I kid...or do I? 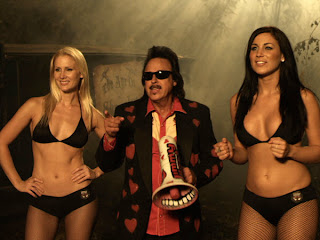 Yeah, I don't know who he is.  I've read that he's a UFC guy, but the film doesn't really explain that.  It just goes 'Herb Dean is in our movie!'  SPOILER ALERT: He's not in it very long. 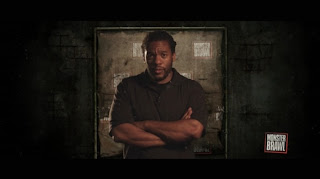 Here's my first major problem: the Tournament.  There are two groups and two different weight divisions.  One group- the Heavyweights- fight twice, while the other group- the Middleweights- only fight once.  They have two separate fights and just disappear.

Look, if the goal was to seem like a UFC event, that's fine.  The problem- you're making a movie and this just kills your pacing!

The film's best parts are actually the Intros for all of the characters.  While they vary in overall quality, they're generally pretty neat.

The problem is that this doesn't fit with the PPV theme.  The best answer for these is that God- aka the voice of Lance Henriksen- is stopping the show to let us see it every time.  When I have to do that much work to rationalize this, you've done something wrong.

To be fair, some of the monster fights are fun.  Very rarely do they really play up the angle for laughs though.  It's only in the final fight- over an hour in- that we get a legitimate Wrestling joke.  It comes when the Wolfman puts the Figure Four Leg Lock on his opponent, but stops to howl before he does so (a la Ric Flair's 'Woo'). 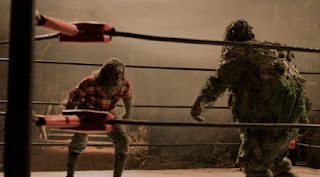 Why is Foley holding this gun and wearing a neck brace?  I won't SPOIL that, but is at least moderately-interesting. 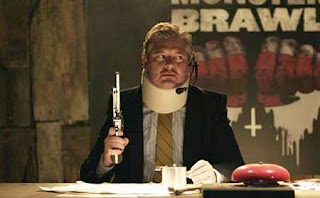 The best part of the film is the great design for Frankenstein's Monster (yes, I'm that guy!) and Robert Maillet's (aka the Uuber Immortal from 300) performance as the Creature.

Unfortunately, the final fight is too long and drawn out for me.  Plus, they tease a sequel battle that would really suck.  The End. 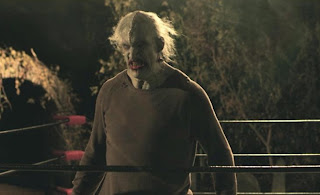 I'm sorry, but I have to give you a bad review.  Do you think that I wanted to hate a movie about famous Monsters- plus Witch Bitch- fighting each other to the death?  Hell no!  I wanted to say 'This is a fun, tongue-in-cheek film that I recommend to anyone who likes that kind of thing.'  I can't.  The movie is just not funny (to me), scary or all that interesting.  It's a neat idea, as I've said, but I don't like the film.  If the film was about people fighting monsters, that might have been more interesting.  I also have an issue with how they decided who was in what Rank.  Why is a Cyclops- who is human size now- in the Middleweight Division, while the Wolfman is a Heavyweight?  Why is The Mummy a Middleweight and a Zombie considered a Heavyweight?  These and many other issues bring this film down.  If you're more forgiving and just like to see people in suits fight, you may still like this.  For me, it's not funny or scary enough.  As for that sequel idea, what do you think, Jimmy?

Next up, I discovered the sequel to a shitty Lorenzo Lamas film.  With Ted Raimi and a new, Sci-Fi setting, will it be better?  Stay tuned...
Posted by Alec Pridgen at 1:08 PM