A Brief Rant on 'Sinister' (and Modern Horror Films in General) 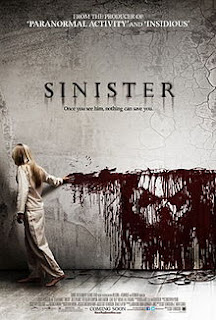 *sets down Soap Box and stands up on it, clearing his breath*

I liked Sinister to a point, but I had one key problem: explaining everything.

Before I go too far, let me make this clear.  I don't like when horror films don't explain anything at all.  See 1981's Scream for a good example of that.  There is a point, however, where explaining things becomes a chore.

As I was saying, Sinister has a neat, if flawed, plot to it.  However, the ending is laid out within the first forty-five minutes to an hour (depending on your knowledge of horror films).  In spite of that, the last ten minutes or so continues.

The more complex aspects of the supernatural (which I won't SPOIL here) are explained to us as having happened before.  Instead of leaving that be, they felt the need to show us every single solitary detail.

There's explaining things and then there's acting like your audience is a brain-dead mass of lumps that need you to show them everything.  They aren't...are they?

No, they aren't.  Good luck explaining that to Studio Executives though.

In summary, if Sinister's Third Act wasn't written with the assumption that people couldn't figure anything out on their own, I'd give it a semi-strong recommendation.  As it is, that Ending is just...ugh, that Ending.


*steps down from Soap Box*

P.S. That scene of people hanging from the tree (no SPOILER, since it's literally the opening scene) loses its impact by the 257th time you've shown it.  I'm just saying...
Posted by Alec Pridgen at 11:41 PM