Anime is weird.  Sometimes, that works for me.

Let's talk about Excel Saga, shall we?
It's not exactly a show that Bob was trying to get me to watch, but it had been brought up in the past.  That still counts for me.

Excel Saga is the tale of Excel, a loud, fast-voiced lady who works for a guy who wants to take over the World.  Instead of going right for the gold, as they say, he takes a more realistic approach.  Why conquer the whole world, he says, when you can conquer one Prefecture in Japan.

Yeah, it's that kind of show.  It's completely random, completely goofy and quite Meta.  Here's the rundown...

* Excel is loud, talks fast and is usually hungry.  She carries around a dog as her 'Back-Up Emergency Rations.'
* Hyatt is her comrade, a young lady who is not well.  Basically, she randomly dies and comes back whenever it would be least convenient or not be expected.
* Lord Illpalazo is a guy who wants to rule the World.  He stays in his Sewer Base and likes to drop Excel in pits whenever her banter annoys him.
* A trio of neighbors turned government workers try to stop their plans, even if they never actually know about them.
* Nabeshin is a guy who is always involved in the plots, even if it's by accident.  The show's creator- but not the original Manga's, to avoid Comments- plays this character, which may or may not be a satire on show creators putting themselves in their own works.  Given the show, it's not clear. 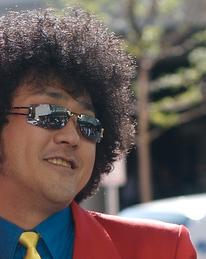 * Pedro is a migrant worker who dies in the first two Episodes, only for his life to somehow get worse.  His 'saga' appears in 2 minute increments throughout the series, finally getting a wrap-up in Episode 20.

It's hard to explain this show, really.  It's a parody of Anime, while embracing its tropes.  It's full of goofy writing, while often making jokes about it.  The Manga's Creator appears, but only to 'be upset' at how his work is being changed.  Seriously, that happens- alot.  Most of the Episodes are style Parodies of Anime shows, be them Dramas, Sports Show or Romances.  One of them is an outright Parody of Fist of the North Star even!

Mind you, this is something you'll get if you watch more Anime than I do.  For me, it's a wacky show that is hard to really recommend.  If you can make it through three episodes, you'll love it.  It's hard to explain...you just kind of have to see it.

I can actually sum up how random and Meta is in this one instance...

Episode 20 is the Pedro Clip Show Episode, which even Excel jokes about as being due to the Writers being lazy.  The catch is that the original American Voice Actress lost her voice partway through the series.  As such, they chose to re-dub Excel's dialogue bit in the first clip.  So the joke of them doing this to not do any work (at least in the U.S. Dub)...is not really true.

If you're still not sure how you feel about the show after that, I'll leave you with the show's closing Credits.  If you want context, watch the show.
Up next, I attempt to tackle the show that brought us Flying Gun Vampires.  If you need a reason to read the next review still, then I feel sorry for you.  Stay tuned...
Posted by Alec Pridgen at 12:16 AM

Email ThisBlogThis!Share to TwitterShare to FacebookShare to Pinterest
Labels: anime