If you ever thought that my Reviews were too long, you're in luck.  Rather than reviewing Scary or Die, I decided to review one story- The Crossing.  Why?  Well, I wanted to see the film for two things: Bill Oberst Jr. and a story involving Zombie Clowns.  It happens that Oberst Jr. is in The Crossing, which also happens to be the first story.  That sure saved me a lot of time!  I will probably go back to Scary or Die in the future, but let's focus on this tale right now.  The story is about some Rednecks who don't exactly feel all that inclusive about America.  The way that they handle it is, well, not exactly politically-correct.  This is a Short that pulls no punches and shines because of it.  If it were full-length, I would grow to really hate one of the characters, so I like the format choice here.  This is not a Short for the faint of heart- I'm just warning you now.  To find out a little bit about this Scary or Die Short, read on... 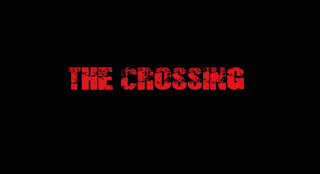 The story is set in Arizona (although I'm 99% sure that it was filmed in California) and is set right near the Border Crossing Zone (hence the title). 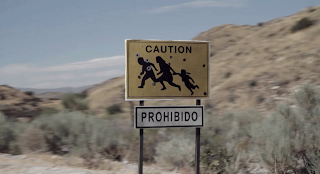 Our main characters are (from left to right) Redneck Yokel, Girl Who Kind of Looks Like Megan Fox and Bill Oberst Jr.  They are driving towards the Border for reasons that only two of them know. 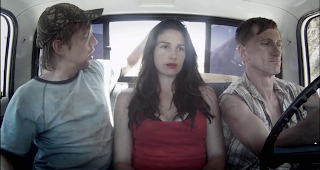 Once in the area, things turn really bad for anyone with an accent.  I won't SPOIL what happens, but I think this face sums it up quite well. 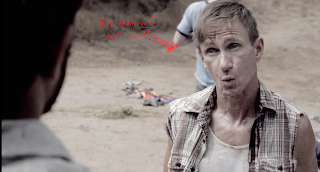 For a film with a silly set-up (Scary or Die is a website a la Funny or Die), they manged to produce at least one really good Short.  The Crossing is oddly-paced at times, but works for me overall.  The weird little aside at the Convenience Store where the younger Redneck does the bit from No Country For Old Men felt pretty silly and unnecessary.  I get that it leads to him killing the guy, but I'm not sure why that part was necessary.  With that said, the rest of it shines pretty well.  The Acting in general is quite good.  Obviously the stand-out performance is, yet again, Bill Oberst Jr. in a scary role.  The guy is apparently quite nice and gentile in real-life, but he can be a scary motherf@$%er on film!  Seriously, he looks like he will kill you without even flinching.  This guy is awesome and demands more mainstream work.  In the meantime, watch him in stuff like this and go 'I knew him before everyone else did.'  While not perfect, The Crossing is a solid, Horror Short that I recommend to those with an open mind and that aren't easily offended.  The only real flub: the part where a fly tries to suck up the stage blood.  Mmm...sugar. 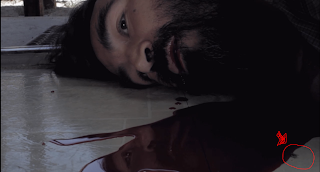 Next up, a full review for my third Project Terrible film.  Will Maynard Curse me or will I just scoff at him?  Stay tuned...
Posted by Alec Pridgen at 4:01 PM