* Editor: Bob had so much to say that he suggested that I post it as a review.  Why not? *

This was amazing. I knew going into this (since we'd tried and failed to get through it before) that it would be horrid, but never in a million years did I expect it to be this horrid.

This is unquestionably one of the worst films ever made. I'm not going to say the worst because that encourages the universe to prove me wrong, and because opinions vary on just what makes a film the absolute worst just like they vary on what makes one the absolute best, so there's no clear answer. But this is definitely right down there in the bottom of the garbage dump.

Like Al said, everything about this was awful. The writing, the acting, the special effects...the music was tolerable at least, but usually poorly chosen for the scene, so even it had severe missteps. Al went over the general stuff, so let me call out a few major elements.

1. The dinosaur fights consist entirely of two or more puppets kind of shuffling around and then waving their heads nowhere even remotely near the other puppets. It's impossible to tell what's going on or even what the filmmakers thought should be going on. These take up a huge amount of film time, by the way.

2. The dialogue for the various alien species is all or mostly actually spoken in English, but with awful vocal transforms and filters put over the voice acting so it sounds like aliens from Star Wars if they spoke while vomiting. It's hilariously obvious that it's being spoken in English, but somehow still manages to be unintelligible about 75% of the time. However, to make sure you have no chance of figuring out the plot, the film only includes subtitles sometimes. In fact, the subtitles normally show up when the dialog is actually understandable, and go away when you'd actually need them. Oddly, there's even one subtitle that says "uninterpretable" or something to that effect. I formed a theory that the subtitles were actually put in by Troma or some other group, rather than the filmmakers, without access to the script--doing their best guess, basically. That's the only way I can figure out that this would have happened.

3. About halfway through the film, the "hero" of sorts--the guy going to look for dinosaurs--finds a spaceship that the locals think is an alien god. He goes exploring with his buddies and waxes philosophical in a spacey, dazed kind of way about religion and such, and explores the ship at length, even though it has nothing to do with his mission. Then, near the end of the film, he finally finishes exploring the ship, and just gives up on it and goes back to his actual mission. The film narration even characterizes it that way. It's basically the film flat-out saying "we deliberately wasted your time with something utterly unrelated to the plot for about a fifth of the movie." 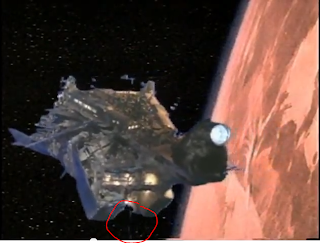 4. As Al said, nothing that sounds remotely interesting is ever shown. There's tons of narration and/or planning scenes about the evil dictator robo-thing's battles against some kind of psychic high priest adversary or something, and people are constantly coming to report to the dictator about how some plan of his or another failed, but we are never--never--shown any of the actual action. We don't even see any of the rebels except for like twice--once a brief shot of a couple of them burning themselves in protest, and then once at the end with one swooping in for an assassination attempt. Which is a shame, because rebels against an evil overlord would be heroes for the film, which are otherwise kind of totally absent.

5. Holy crap does this film ever throw a metric ton of history at you. It's like if Peter Jackson had started out the Lord of the Rings film series by showing you the entirety of The Silm...

No...no, I'm sorry, that would still provide the opportunity to be a good film, if an odd choice to start out. Let me rephrase. This is like if Peter Jackson started out the Lord of the Rings film series by taking a handheld video camera and filming mostly static, quickly-made models of generic fantasy locations while an actor he hired for the day and didn't give any prep time read passages from The Silmarillion that had been auto-translated from English to Spanish to Japanese to Dutch and back to English, just to make sure any trace of Tolkien's writing talent had been eliminated so there was no way the audience could be entertained. It is all world setup. And that would still be better because Tolkien's world and lore are good.

There is no real story here. It is all an elaborate, lovingly detailed description of the world, past events, and political powers, with tons of made-up words without any context. "Opening Text Scroll: The Movie."

6. So you get through all this...you watch all this crap...and you're wondering--just wondering, because the film's been going on for a while and it sure doesn't seem to be going anywhere--how long is left in the film. You move the mouse to get the timer to show up, and notice that there are five minutes left. Nothing's happened at all in the film, really, and there's five minutes left. Wow. Just wow. Obviously, this is going to suck majorly. There's no possible way anything good can come of it. But even so, when the end comes, you're astonished.

I about fell down dead right there. That nearly killed me.

The filmmakers had the nerve--the absolute, unlimited nerve to create one of the single worst films in the entire world and assumefrom the start that they were going to be able to continue it.

Here's a request for aspiring filmmakers out there.

You can leave things open to an extent at film's end, if you want to chance it or if, like this, you're planning for it to be a show pilot. But the story within this particular film or episode should feel complete. I should be able to watch your film and feel like I got an actual ending and a sense of closure.

Yes, there are some films that get a free pass: the aforementioned Lord of the Rings films, for one, because they were based on a book trilogy to begin with. But even some of the greatest film series--say, the original Star Wars trilogy--have a clear ending at the end of their first film. If the Death Star had blown up and Luke and company went to celebrate, and that was it, that would have still felt complete.

When you make it big, you can break whatever rules you want, but until then, obey this: even if you intend a film to start a series, write it to be self-sufficient. Do not assume from the start you'll be able to ever make another one. I'm not saying this because I think your story is necessarily going to suck--especially not as mightily as this one did--but because there's nothing I find sadder than a story without an ending. Look at other TV show pilots, for instance. White Collar. Burn Notice. Leverage. Eureka. They all set things up to continue, sure, but each of those had a story for the episode that was entirely contained within that episode and featured a clear ending. There was something that gave you closure. If that was all you saw, you got a sense of an ending that would work.

This movie broke that rule utterly. And that--above the horrid concept, the lack of a hero, the terrible voice effects, the abandonment of the plot, the lack of any actual events...above all of that--that is the worst sin this commits. It failed to have an ending.

Never. Ever. Do. That. Please.

Actium Maximus was one of the worst films I have ever seen, and I've seen quite a number of very, very bad films (not as many as Al, of course, but "thanks" to him I'm amassing quite a record myself). It is not in any way worth watching, and I'm going to start pretending I didn't waste my time doing so right...now.