Seagal is in a decent film, in spite of himself!  Today's film is Maximum Conviction, a film that I originally didn't Rent as review fodder.  I watched it with my friends and it was...not too bad.  To be fair, the good parts were all sans Seagal, who is not in this as much as a lead normally would be.  Instead, the bulk of the action is given to Steve Austin, mostly-retired Pro-Wrestler and Action star.  While I haven't reviewed them, some of his recent works have been good.  Recoil was good Action fodder and felt like a Jack Reacher film- only with someone the right height and build in the role.  Likewise, Tactical Force was fun, smart and co-starred Black Dynamite.  So, in summary, I've mostly avoided covering them because I liked them.  Let's shuffle back to Seagal now.  He took some time off in 2010, mostly because he was facing charges of human sex trafficking.  To be fair, I don't know that he did it, nor did the charges ever go that far.  It did, however, slow down his film work and put an end to Steven Seagal: Lawman.  You can see why they ended the latter show, especially while the case was being investigated.  Well, he's back in the U.S....with a show he filmed in Bulgaria- True Justice (sigh), which is now entering Season 2.  As such, let's take a look at Seagal joining forces with Steve Austin to stop 'Oda Nobunaga' aka Michael Pare.  It's full of cliches, annoying Editing tricks and explosions.  To see why I don't really hate it, read on... 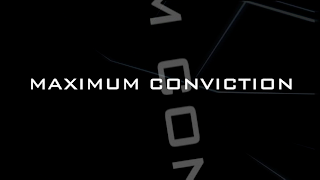 Seagal and Austin are working at a Prison nearing its closing.  While they still have prisoners there- for ill defined reasons-, there lives change when two brand new ladies are brought in. 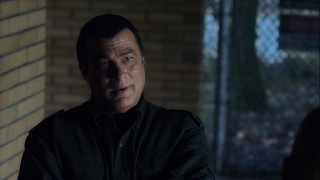 In some of the less than subtle writing that you'd expect, the bad guys sneak into the Prison as a company called Troy, who's logo is a horse.

What was a picture of Admiral Akbar saying 'It's a Trap' in all Caps too overt for you?!? 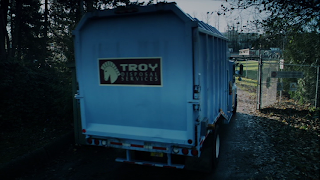 Pare and company show up disguised as Marshalls.  Their plan is aided by the earlier agents opening up a back door into the Prison for the rest to get in.

Oh and this all happens while Seagal is out at a bar.  Our hero- making a late arrival to make himself seem more important! 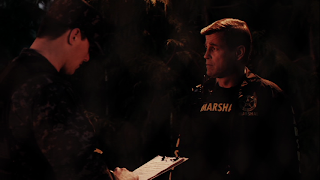 Speaking of Seagal, he crams himself into a Tactical Assault get-up, complete with sunglasses...at night.  Damn you, very fat Corey Hart! 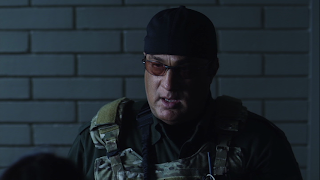 Meanwhile, the rest of his team- read: the young, fit guys- go off for random fight scenes and shoot-outs.  This is your big break...guys who's name I didn't learn.

In a third set of action scenes, Austin is on his own and makes Mythbusters cry with this exploding, rocket-like gas container! 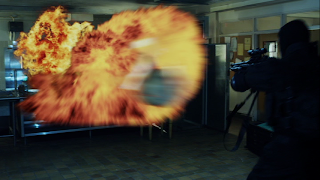 Meanwhile, the poor Warden gets captured early on, gets a finger cut off and led around for the majority of the film at gun point.  His death just caps a truly Poor Bastard of Cinema role perfectly. 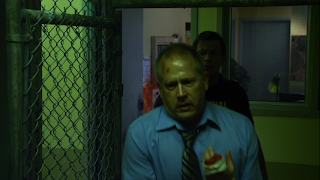 Highlights of the film include a fight scene with the young members of the team fighting the flunkies.  Pointless, but fun. 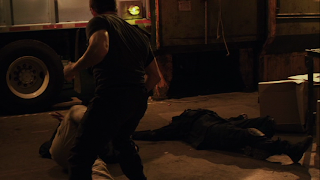 I won't SPOIL Seagal's final fight, but I will tell you that its a boring, one-sided beat-down.  It does end like this though... 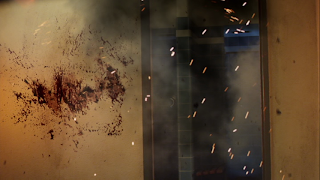 The movie even has the nerve to set up a sequel.  Will it come?  If the Grimace here needs another house payment, probably. 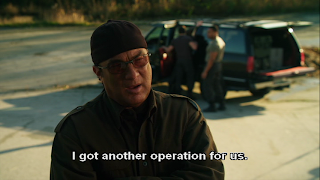 The fat has hit the fan!  The film has many good points, many decent points...and Seagal.  He doesn't do a whole lot in this movie, to be honest.  After squinting and beating up one black prisoner, he vanishes for quite a while.  When he returns, he beats up two random guards, suddenly appears in some Tactical Gear- seriously, it happens in a single Cut-, and mostly wanders around.  Finally, he gets his final 'I'm getting paid for this' fight and sets up a later film.  The bulk of the work goes to Steve Austin and the younger crew members.  Hell, Michael Pare does more in the film than Seagal!  Granted, he's the villain, but he doesn't have top-billing like Seagal does.  The bad parts of the film involve the Editing for Seagal's scenes, some lackluster shoot-outs and some annoying Editing tricks.  It's one of those 'we're a hip film, dammit' moments that makes you go 'ugh, don't bother.'  Honestly, aside from that, it's an enjoyable, if mindless, action film.  For Direct-to-Video Action fare, you can get a lot worse.  Let's see if Austin's team-up with Dolph Lundgren turns out this decent.  Take us away, classic Seagal face... 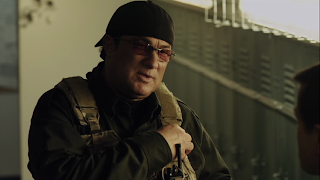 Next up, a story about why its not safe to go grocery shopping in Australia.  If you're out of Zombies, add Sharks instead!  Stay tuned...
Posted by Alec Pridgen at 11:26 AM