Very Dead: Survival of the Dead

At this point, it's more of a mercy killing than a review.  I like you, Romero, but you've made some serious mistakes in the past.  Martin, while many like it, managed to bore me to tears for most of its run-time.  Season of the Witch had a similar effect.  Bruiser had its moments, but didn't exactly make much sense.  While he had a nice career revival with Land of the Dead, it's follow-up was, well, you know how I feel about that already.  So how does he end the second trilogy?  With Survival of the Dead, of course.  Let's start off with the obvious question- what's up with that title?  Land of the Dead is about society being overrun  by the zombies, which is becoming the titular location.  Diary is about people trying to make a video diary of rising of the zombies, so that makes sense.  This movie is about people on a single island feuding over whether or not to kill...or re-kill (second kill in Stacy) the Zombies, so it's called Survival of the Dead.  I kind of get it, but it's not nearly as clever or direct as you would hope.  The original Trilogy had a Night to Day theme showing the progression of the Zombie Apocalypse.  Here it is three random stories featuring Zombies by Romero.  If you could cut the films down to 45 minutes, you could make Creepshow of the Dead (copyright, bitches!) and do it better.  Mostly, I just want to cut Diary in half- sue me!  There are numerous problems here, whether it's with the pacing, the effects, the characters or the overall theme.  To find out how this movie is only a little better than Diary, read on... 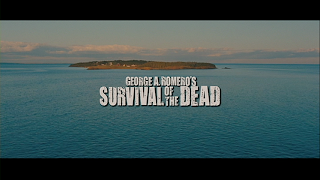 The Intro sets up the film, but also all of the problems.  First- our heroes are Soldiers who are not empathetic, nor are they cool enough for you to excuse that. 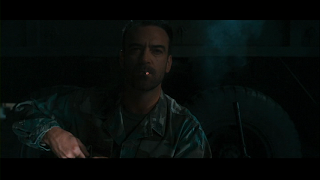 Second- this film uses almost nothing but CG Gore.  In Diary, it's 'excused' as Romero trying to shoot it all on the fly, not leaving time to set up squibs, prosthesis' and the like.  Here- it's...um, just here. 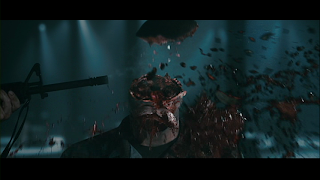 Three- they remind us of Diary, but playing the Soldiers' scene in its entirety (just about).

How the guy thinks that they 'could be stars' is up to you to figure out.  You were barely in a film that may or may not have come out during a Zombie Apocalypse.  What would be the Box Office take on that?  I think that even Zyzzx Road would do better! 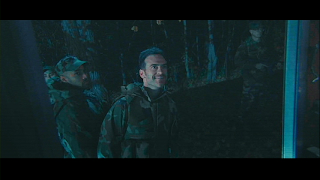 The bulk of the story is about a feud between two Irish families on an Island off the Coast of...somewhere.  It's apparently close enough to drive to from Philadelphia, since this is a Romero film

Oh and he didn't film shit actually in Philadelphia though.  Hope you like token fan-service, city! 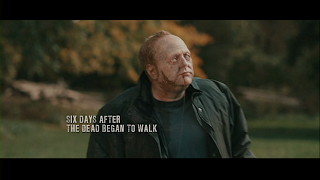 The larger clan kicks one out after they continue to 'second-kill' the Zombies.  The others insist that they can be cured, although they're a bunch of farmers not geneticists.

Months later, however, our heroes see a video message he posted online advertising the island as a safe haven.  How good is your wi-fi in a Zombie Apocalypse?  Oh and where did the guy buy a camera? 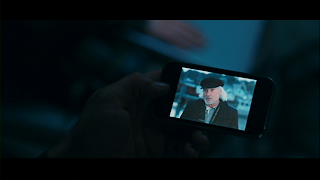 Sparing you some zombie filler, the group gets to the Island.  They find a not-too-friendly welcome as our leader tries to take a bullet for one of the men...but it just passes through and kills him anyhow.  Wow.

The leader of the remaining Clan has set up the zombies in their old jobs, albeit chained to nearby posts.  His goal: get them to eat anything other than, well, us. 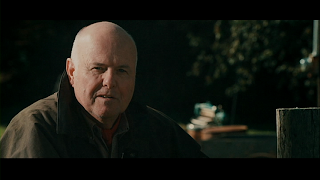 On the island, we learn that the exiled leader's daughter is a zombie now- don't ask, I guess-, but still rides her horse instinctually.  Is she the key to finding a non-flesh-eating zombie?

Oh, by the way, she has a twin sister.  Nice of that to NEVER come up in the Intro, by the way.  Lazy writing for the win! 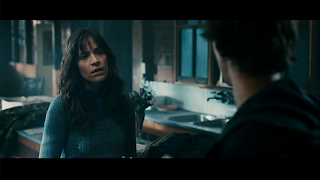 Sparing you a long, drawn-out Third Act shoot-out, the zombies do start eating the horses.  It's too late for both daughters, however, but...yea?  Sorry, horses. 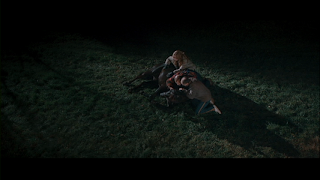 While a worse Narrator than Diary's (it's the Lead Soldier now) delivers exposition, the zombies of both Clan Leaders engage in a duel.  Get it?  Do you care?  The End. 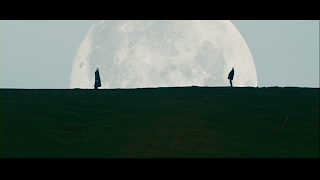 So what was the point of this?  The Dead films are a series, so you expect some sort of escalation.  Night is about a small group in a single house when the outbreak starts.  Dawn is about a larger group coping with the outbreak in a larger way that seems to be affecting all of the United States.  Day, in spite of a lack of budget to do it properly, shows that the World is now affected and shows the Military doing what they can.  Land continues that story, showing how class inequality is still prevalent during the crisis.  That leads us to Diary, which...just kind of starts over again and focuses on a small group like Night.  The whole thing, for now, comes to a close with Survival, a film about a small group of soldiers going to an island to escape the Zombie Apocalypse.  So, it's kind of like Day of the Dead, only not as good.  All of the characters- save for a few- are unlikable assholes.  Day had a very famous one, but also gave you such a great pay-off to that character.  You could have taken lessons, Remake of Day!  Unlike that film, they don't turn the zombies into Resident Evil rejects, so it has that going for it.  The big problem with this movie is the fact that it gives you very little reason to care.  The characters are unlikable, the story is not that interesting and the scope is extremely small.  I know that Romero made this 'on the cheap,' but he could have tried harder.  It seems that he really wanted to tell this tale of 'Will Irish Farmers kill Zombies or Not' and nobody could stop him.  I...I just don't get it.  I think that Romero really sums up the problem quite nicely here... 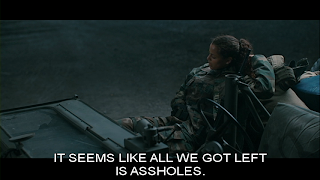 Next up, a Rare Flick finally available on DVD in the U.S.  After four years, it's time for some 'new' Godzilla action!
Posted by Alec Pridgen at 12:07 PM