Look at me- big shot blogger!  All kidding aside, it's nice to get an actual request from a filmmaker to review their work and help promote it.  I'm free for Lincoln 2, Spielberg!  Today's film is The Prospector's Curse, a film that I teased last year.  Well, there's a finished product, so I can actually review it.  The man behind the film was kind enough to send me a link to their film on a Streaming site- with password protection, naturally- and I watched it.  To understand the film, you must realize that it's designed to be part of an anthology film.  This is one segment of a film like V/H/S, although hopefully more consistently well-regarded by critics.  For the record, I haven't seen it.  Anyhow, Curse is a cautionary tale about Greed and just where it will get you.  To find out a bit about what happens, read on...

At a small Mining Town, a man has been killed and a *ahem* lady of ill-repute has been attacked.  Where did the culprit go?

He's fled to the Woods, where he runs across a traveling huckster.

The pair come across a dying Prospector with a story to tell.

He has some gold and knows where more is, but wants his share delivered to his wife.  Well, that and a 'Christian burial.'

The huckster sees dollar signs and ignores him.  Where does this lead?

Sorry, no SPOILERS here.  You'll just have to see it for yourself.

*
For what it is, I kind of like it.  Curse isn't the kind of Short that re-defines the Genre, sets the world on fire or makes you go 'Damn!'  It's good though.  The story is made up of two simple parts that tie together pretty well in the end.  It's an interesting way to do the story.  It's not a huge budget movie, but they make a good use of what they have.  There are only a few sets, but they look nice and authentic.  The Short is well-shot, well-acted and just generally put together well.  It's the kind of story that could easily be extended past the fifteen minute mark too, so they have room to grow.  If they can find a nice home for it among some other good Shorts, we'll have ourselves a nice film.  If not, we'll end up with Creepshow 4 *shivers*.  Let's hope that this film gets a better treatment than that. 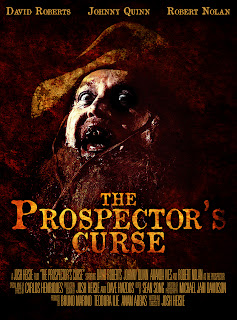 Next up, I decide to take a look at the ugly, middle child of Romero's second Dead Trilogy.  Everyone- but Maynard- seems to hate it, so why don't I join in?  Stay tuned...
Posted by Alec Pridgen at 11:01 PM

Email ThisBlogThis!Share to TwitterShare to FacebookShare to Pinterest
Labels: indy