At long last, it's here!  1989's Godzilla vs. Biollante has been one of those films that has been really hard to get...in America.  Damn you, Japan- stop hoarding your Godzilla films!  I say this as someone who owns Godzilla 1985 on VHS, since I don't know of a DVD release for it.  It's the only hold-out now- save for Rebirth of Mothra III.  Seriously, I've seen ONE guy selling a single Region-Free DVD of it.  What's the deal?  I digress, as this film actually has a DVD release now.  $5.99 well spent, in my opinion.  This once-hard-to-find film is the follow-up to Godzilla 1985, the Reboot as it were for the franchise.  It started the Heisei Era that ran up to around the year 2000.  In this film, Godzilla lies dormant in a volcano, but they know that it's only a matter of time until he comes back.  To that end, a cross-breeding of a rose and Godzilla's own genes (taken from skin cells left behind in the previous attack).  There's another ingredient, but I won't SPOIL that just yet.  For the first time in this new Era, Godzilla has a monster opponent- as he just fought us in the last film- to duke it out with.  Will this underrated creature be able to do what no other creature- saved for possibly Destoroyah- could do?  To find out, read on... 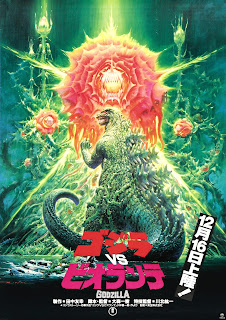 The film begins with a quick summary of Godzilla 1985- which is nice to see in higher-than-VHS resolution.  All you need to know: Godzilla smashed shit up and then got dumped in a volcano.  On the plus side, he managed to land on Joe. 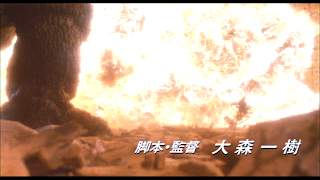 In the aftermath, there's a fight over some Godzilla skin cells found in the wreckage.  This guy- who looks like the Japanese Ed Glaser- wins the fight and the cells get used by a fictional Arab country- with a Japanese staff, naturally- to create a plant experiment. 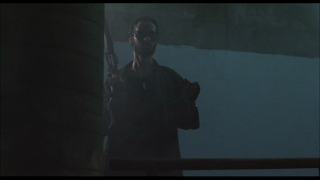 During the work, an explosion kills the lead scientist's wife.  This leads to him using some of her DNA in the creation as well.  No, really. 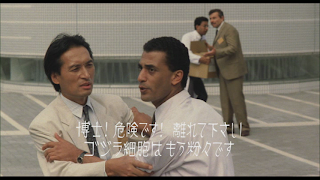 Eventually, Godzilla rises from you grave...er, volcano.  Meanwhile, Biollante rises from its...um, pot and starts smacking people around.  Time for the smackdown! 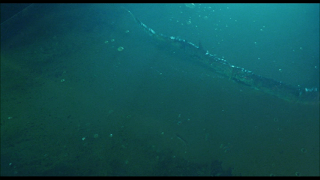 The battle between Rose-Form Biollante and Godzilla is dramatic, but the latter seems to go down for the count.  Oh nos! 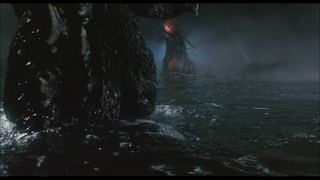 Fortunately, the new and improved Super X-2 is here.  It's got a shield that reflects Godzilla's atomic breath...until it stops working.  Oops. 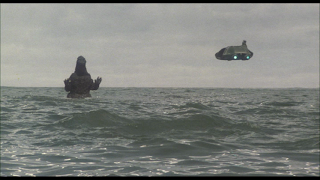 Alright, maybe this psychic girl can stop the creature.  Surely if anyone can, she...just passed out.  Crap! 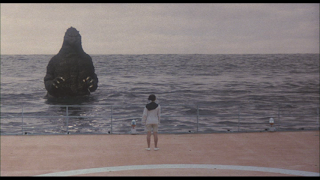 No, Godzilla continues on his path towards...um, the other side of the road.  If their new 'shoot lightning from the sky to raise Godzilla's temperature to make the radiation-eating microbes work' trick doesn't work, what's left? 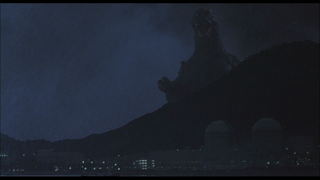 Oh shit- Biollante is back!  He's a Cthulhu-like mass of with a small mountain for a body and Godzilla's mouth.

In spite of being a freaky, freaky thing, it manages to stop Godzilla.  Oh and Japanese Ed Glaser dies too. 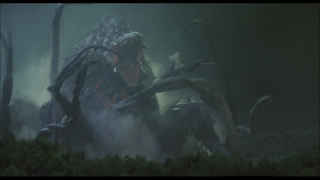 As Biollante 'dies', we get one last creepy image to think about as Godzilla revives and just kind of leaves.  The End. 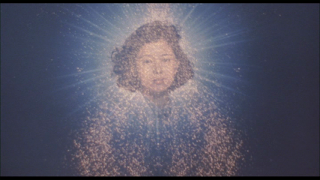 It was worth the wait, I think.  Godzilla vs. Biollante is not the most creative of the franchise, but it does feature some unique ideas.  The Director explained in the Making Of on the Disc that the goal was to find a new thing to worry about in place of Nuclear Power.  That replacement: Genetic Engineering.  Given the prevalence of G.M.O.s and seedless Watermelons, it's interesting to see a film address this in 1989!  The action is fun, the Effects look good and I was never bored.  I will say that there is a lot of weird, ancillary stuff.  I don't think that the part about the U.S. Military trying to steal the Godzilla cells was really necessary, especially since it went nowhere.  Is that payback for us re-Editing Godzilla 1985 and adding 'Perry Mason' to the tale?  Is it vicious irony for us trying to make the Russians look more evil in that film?  In summary, Godzilla vs. Biollante has been hard to find in the United States for years.  Now it's not, so go see it.  There can be only one! 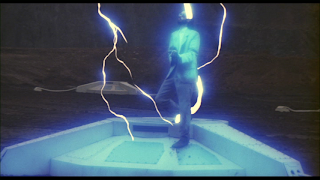 Next up, I revisit a film reviewed in the very early days of Mondo Bizarro.  It has Mexican Wrestlers and Midgets, so it's made of win!
Posted by Alec Pridgen at 11:56 PM