That is the major reason that I watched this show to review it.  In short- Flying Gun Vampires.  I should probably elaborate.

I watched the first episode quite a while ago on Streaming with a couple of my friends and we joked about how the cannon fodder seemed to be Vampires that were flying and had guns.  This spawned the go-to joke 'Flying Gun Vampires- the weakest of all vampires.'

As it turns out, there is more to Black Blood Brothers than that... 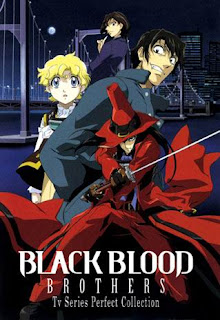 Brothers is the tale of two Vampires, a lady and a city full of, well, other Vampires.

* On the far right, you have our hero- the Silver Blade.  He's our stock hero.
* In the middle is our heroine, a woman in over-her-head in common Anime fashion.
* On the left is our hero's brother.  He's WAY too cute and adorable for this show, so why is he here? 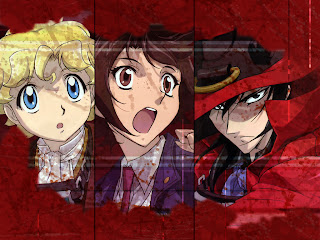 The villains of the show are mainly these guys.  Essentially, they're super-bad Vampires who don't believe in hiding Vampires (aka Black Bloods) from humans (aka Red Bloods).

They're the Flying Gun Vampires from the first Episode, in case you were curious. 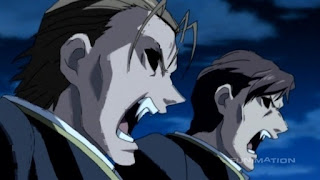 On top of that, our hero will randomly have flashbacks to this blond woman.  They usually come at the beginning of Episodes- especially in the wrap-up Episodes 7-12.

There is a point to them, but it would be a pretty big SPOILER if I say it, so I won't. Here's the short version: our heroes are trying to get to The Special Zone, a place where 'good' Vampires can live in peace.  However, evils from our hero's past come after him, putting the whole place in jeopardy.  Action and biting ensues. 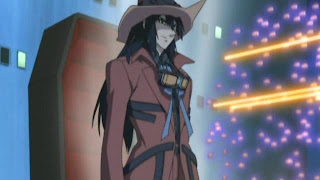 In summary, Black Blood Brothers is a good show.  I didn't always love it, but there was never a dull moment.  The characters are pretty stock at times, but they worked.  If you go into the show blind, you may have many questions.  Why is that cute blond kid on the show?  How much comedy can be forced into a show with lots of killing?  Why does it seem like they want you to understand so much more Mythos than they actually set up?  The latter is apparently a common thing done in Anime (or so I'm told) and is designed to make the show seem bigger.  It may have something to do with the show condensing a lot of plot from the Manga, but I can't really confirm that.  The film plays fast and loose with a lot of Vampire Rules too, which is good and bad.  For example, Silver kills Vampires, since we all just kind of think that for no good reason now.  They do use some old Vampire Rules like how Vampires can only turn you if you drink their blood too.  However, the bad Vampires can do it with just a bite...so why bring that rule up?  In the End, it's a good Action Anime that makes more sense in the End than it does in the beginning.  Ditch the kid next time though. 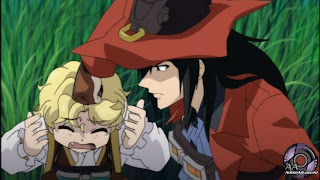 Next up, a show that truly embodies Japan.  It's Japanese History, only full of half-naked ladies in armor.  Stay tuned...
Posted by Alec Pridgen at 3:45 PM