A Review in Pictures : Sharkotpus

Why the hell not?!?  That was pretty much the logic behind this movie, I think.  Only Roger Corman could go 'a half-shark, half-octopus creature- green-light that!'  Need I remind you that the last film that he directed was 1990's Frankenstein Unbound.  In that film, a bored guy from the future goes back in time using his time-machine/car to meet Mary Shelly, Dr. Frankenstein and Lord Byron.  If you think that I'm kidding, check out the streaming version of it here.  So yeah, this movie is about a shark-octopus hybrid running amok at a coastal resort in Mexico.  There's more to the film, but it's mostly just window-dressing.  Since this is a recent film and I kind of want you to see it, I bring you another review in pictures.  Enjoy the CG-silliness that is... 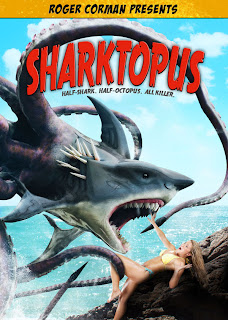 * The hybrid creature escapes its masters- a mere 8 minutes into the film- and shows off it's superiority quickly. 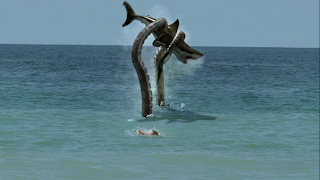 * Sharktopus takes out a bungee-jumping tourist.  Oddly, this is played by Roger Corman's daughter! 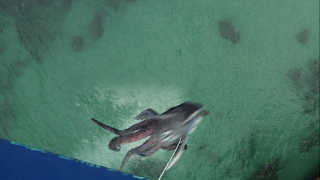 * In a somewhat wasted idea, the Sharktopus briefly walks on land (the beach) using his tentacles, but doesn't really do it again.  Breaking the laws of physics- yes.  Awesome- yes. 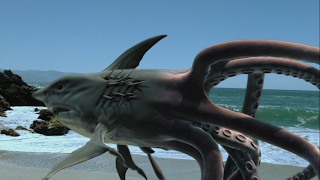 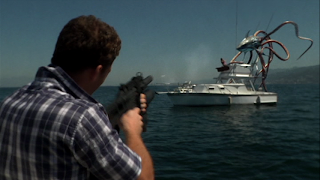 * Odd perspective shots aren't always a good idea when your special effects are made in Adobe Average. * You'd better run- this Sharktopus is pissed!  How dare you mock my silly and frivolous existence! 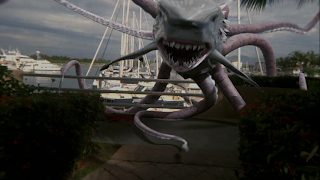 Corman is one silly, silly man!  The plot of this movie is very basic, but it kind of works.  This movie doesn't claim to be Citizen Kane or anything!  I would say that it's a bit silly to introduce the 'government weapon' idea when it escapes captivity on the very first mission!  I was kind of hoping for a throwaway line about this being 'one last test' or something.  I'm being picky, I know.  The film is just an excuse to string together a bunch of Sharktopus kills.  The rest of the film is just window-dressing.  If you like pulp films like this, you'll have a good time.  It's also nice to see that Corman has gotten over his fear of mixed-genre films (i.e. horror comedies) & embracing it here.  Take us away, Corman cameo... 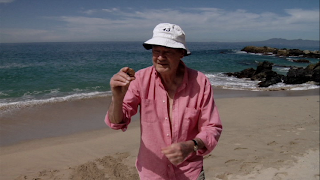 Next up, May begins with Super-Old-School Week.  We look at a movie serial from the early 20th Century...starring Harry Houdini.  Stay tuned...
Posted by Alec Pridgen at 11:38 AM